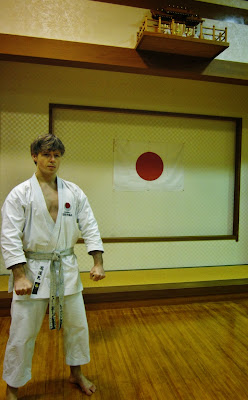 ﻿﻿﻿﻿﻿﻿Due to the extreme cold I have changed dojo for my private/self-training. Until last week, I had been practicing at the old Aso Budojo, which is located in Miyaji. This dojo while great—due to its age—is literally like a commercial freezer. Yes, the dojo even has icicles in it!!! With the snow now falling in Aso-shi, my feet were going purple and numb from the cold… Due to this, and it finally reducing the quality of my practice, I decided to move my self-training to the new Aso-Budojo.
As added bonus is that the new Aso Budojo is located in Uchinomaki only five minutes away from our apartment in Mikubo. Clearly, this is a another advantage as Japan's winter intensifies and travel becomes a challenge.
Anyway, here are some photos from my first training at the dojo, yesterday, on December 17th. The practice to christen the dojo included jiyu-kumite “image training” with hangeki-waza (countering jodan and chudan with chudan gyaku-zuki); stationary kihon (chudan gyaku-zuki and chudan mae-geri and jodan mae-geri); ido-kihon (chudan jun-zuki, jodan jun-zuki, mae-geri and mawashi-geri); and the following four kata: Heian-shodan, Heian-nidan, Nijushiho and Unsu.

Overall, the dojo was fabulous to train in, not to mention, it was great to be able to feel my feet after practice! Best wishes and greetings from wintery Japan. Osu, André