Introduction: To begin, let’s consider the basic training of ‘stationary chudan gyaku-zuki’. From hachiji-dachi with ryoken daitai mae, advance with hidari gedan-barai into hidari zenkutsu-dachi. Assume hidari tateshuto-gamae. From this position execute migi seiken chudan gyaku-zuki followed by reassuming hidari tateshuto-gamae. Repeat for 30, 40, perhaps 100 + times (if you are at a crazy Japanese University karate club) then change and repeat on the opposite side. Certainly, this could be the opening of kihon practice in any dojo, anywhere, at any level. 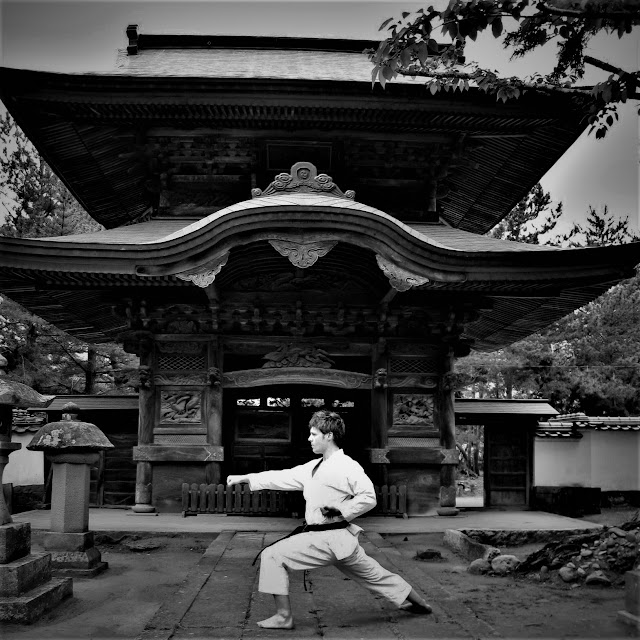 Okay, so that being said, rather than talk about the seichusen, koshi no kaiten, shisei, tai no shinshuku, chikara no kyojaku, kokyu, etc., today I thought to instead focus “…on a point often insufficiently addressed with chudan waza (middle level techniques)”; that is, ‘exact positioning’.

What do I mean by EXACT POSITIONING? Well, this is the ‘exact positioning’ which is “…the foundational form and reference for making waza at any other target”. So, for starters: IT IS THE REFERENCE POINT FOR ‘KIME’. I want to answer this in a way which doesn’t restrict you by organization, dojo or particular instructor’s preferences nor ‘contemporary trends’. Rather, I want to share with you, a basic method to ensure your chudan positioning is correct, by yourself.

So, what is this method?

To cut straight to the point, the exact position for YOUR CHUDAN-WAZA is longest point from initiation to impact with that particular waza. For example, in the case of the chudan gyaku-zuki (as briefly described at the start of this article) one often sees the tsuki inclined or too high. This actually shortens the range (more importantly, in budo, the depth of target penetration to cause damage). Obviously, this also relates to personal safety as well; thus, it has both essential offensive and defensive elements.

Also consider the tate shuto… This waza is at longest point at about the crease of one’s own shoulder height. Again, it is common for this waza to be too low, even amongst advanced practitioners. Some people even visibly bend the elbow! This is what I call a ‘banana position’: as is not only dysfunctional but ugly. The idea is to ‘make as wide a mote as possible between you and your opponent’. This also creates a larger scale hiki-te, which of course results in more power for pulling the opponent and/or decisive blow with the other hand/arm.

How about keriwaza? Indeed, the same thing applies. Your chudan kick, say chudan mae-geri keage, should be aimed to be the longest range between you and your opponent. Think of thrusting a spear into your adversary. A sports karate practitioner will want this length to hit the opponent just enough to snatch a point, but as far away as possible to avoid being scored on (actually, the escape here is the main game, which is why it is nearly impossible for non-taggers to win). Whereas, budo karateka will want the kick to be ideally as far away as possible, however, without compromising the penetration of their sokuto (kakato or tsumasaki) for  maximum damage to the respective target. Some Shihan here in Japan say that correct chudan technique must at least be able to break two boards (and no folks, we are not talking about ‘friendly boards’).

Therefore, if two karateka were side by side, at the same distance from their opponent, and had the same reach and flexibility, the budo karateka would inevitably be closer to their opponent than the sports karateka.

This is the difference between a ‘safe tag’ and ‘the optimization of the techniques long distance without compromising the potential for maximum damage’.

What's so funny about this article is that it runs seemingly contrary to the instructor manuals of all styles. That is, waza should be the most direct line/shortest distance. Actually, this does not contrast with what I've said. Only that, what I have written here, is what is practiced amongst the elite of Japan. Just remember, there are two groups! The elite IN GROUP and the 'general masses' OUT GROUP. If you want to go to a high level in karate, you must train the way the 'in group' does: especially in regards to simple matters (yes, kihon). Otherwise, you will just be a follower. Nevertheless, that's fine if that's all you want from karate. There are not rules only goals and choices.

In sum, if you follow this formula, you will easily self-establish the EXACT POSITION for all of your chudan-waza. This transcends organization and teacher as “…it is dictated by optimum effectiveness FOR YOU”; furthermore, there is a bonus: karate in this ‘expansive way’ fully expresses the correct form of Shotokan-Ryu and, consequently, expresses beautiful movement. 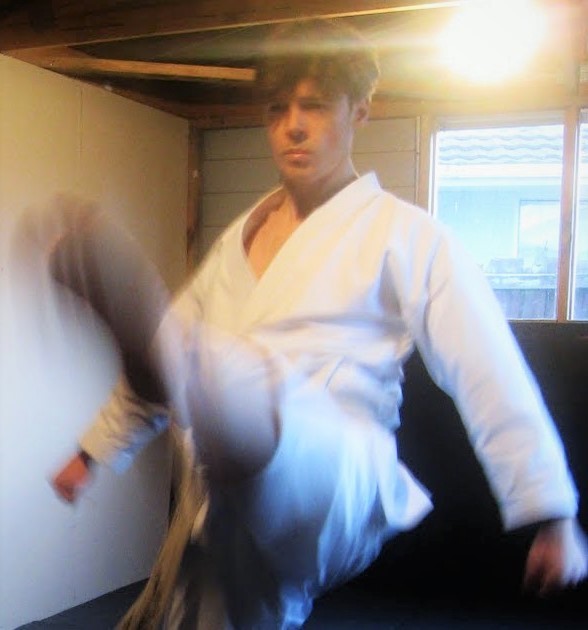