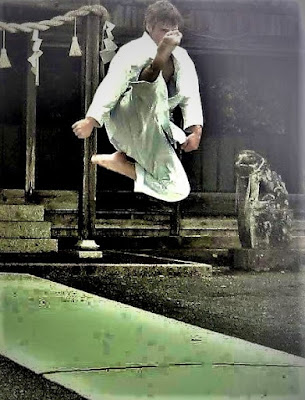 In IKS we have three Meikyo kata, all of which are ‘Koten-gata’ (classical forms). The first is found in mainstream Shotokan, simply called ‘Meikyo’. This kata is a combination of Itosu Rohai that was formulated by Funakoshi Sensei. Meikyo Nidan is the Matsumura form of Rohai.

And Meikyo Sandan is another old form of Rohai. I will leave it there for now.

I have seen Kato Sadashige’s Meikyo Sandan and this kata is a completely different kata from Asai Tetsuhiko Sensei’s (just as Hushu/Fushu/Kaze no te is). Please note that I am not being negative about Kato Sensei’s kata but, in these cases, they are not same kata that Asai Sensei taught. They were made by Mr. Kato. One of Kato Sensei’s senior students told me that he wanted to ‘creatively cover the kata he was not taught from Asai Sensei’.

There are also other kata shown online (labelled Meikyo Sandan) which are bizarre, and clearly contemporary forms with no purpose. One of which is stands out features lots of spinning on one leg with manji-uke followed by lots of weak counters. Someone clearly just composed this kata apparently for looks. It is ugly because it is both ineffective and clearly non-traditional; that is, not developed with actual fighting foremost in mind.

I have not taught Meikyo Sandan publicly yet, nor to my students, as there are so many kata to teach. However, it is now high priority for a future seminar as it is an excellent kata, and beautiful—not only in its movements—but for its effectiveness. When I teach this kata in the future, I will give its history as it is impressive. And, as always, I’ll also teach all of its oyo (applications).