SIMPLIFIED IMPACT POWER SCIENCE FOR THE PERCUSSIVE TECHNIQUES OF KARATE 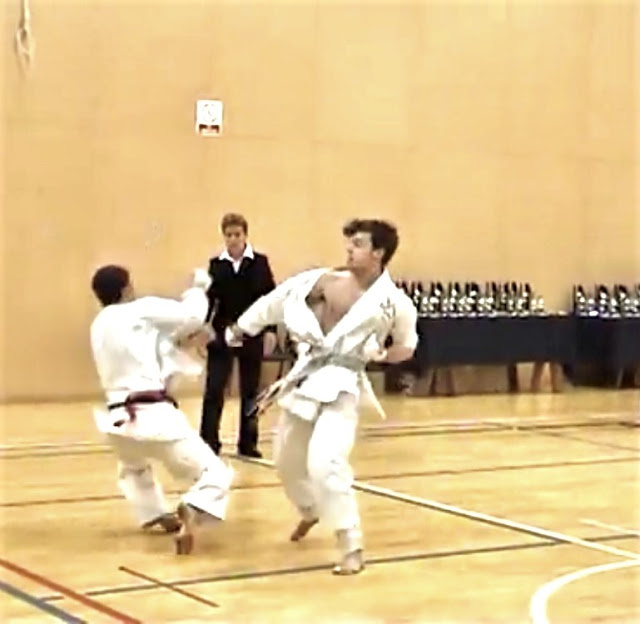 SIMPLIFIED IMPACT POWER SCIENCE FOR THE PERCUSSIVE TECHNIQUES OF KARATE

When discussing the science behind the percussive blows of Shotokan Karate there are, of course, numerous ways to do so. However, irrespective of the angle we take, we must take heed the underpinning ‘base science’. Today I thought I’d spell this out in the simplest terms, which can be directly used in training—by anyone—to increase impact power. I’ll do this, in this post, by outlining three key points.

Firstly, FORCE (the IMPULSE—MOMENTUM RELATIONSHIP) and the factors involved (velocity, mass, and structure). Secondly, it is also necessary to expand this by elucidating ‘The KINETIC CHAIN. Thirdly, I’ll conclude with BODY STRUCTURE’ to essentially support the kinetic chain. Taken as a whole, all three of these aspects collectively underpin the level of Kinetic Energy that can be transferred into a target.

‘The Impulse—Momentum Relationship’ is derived from Newton’s Second Law of Motion. Keeping this nice and simple, the concept refers to the physics of mass and velocity in karate ‘tsuki’, ‘keri’ and ‘uchi’ (and indeed ‘ukewaza’ as well, when applied as a percussive attack). Basically, this is the combination of speed and strength ‘behind your respective waza’. In sum, Newton’s Second Law of Motion can be simplified into ‘FORCE = MASS x ACCELERATION’. The elements in this equation can be further and better expressed as KINETIC ENERGY (KE). Of course, kinetic energy is the energy an object has due to motion; thus, in karate this is a fist, open hand, elbow, knee, foot, and so on. This is the formula that is referred to as ‘the Impulse—Momentum Relationship’, which allows one “…to acquire much more specific information about ‘the underpinnings’ of power generation”. Firstly, it establishes that the velocity (speed) has more of an influence on the energy of karate waza than mass (weight). Again, in the most laymen’s terms, this is because velocity is squared. This is precisely why science shows that it is more important to throw a rapid technique than a heavy one. Of course, however, it is obvious that both are still important. For example, a very fast kizami-zuki with no weight behind it would obviously have very limited impact power.

Overall, “…the most destructive karate-waza will both maximize the mass (weight) behind them and, more importantly, maximize velocity (speed)”. On top of this, engaging ‘the entire body’ in an optimally coordinated way’—optimizing the Kinetic Chain—will further increase the destructiveness of one’s percussive blows.

Whilst understanding the ‘Impulse—Momentum Relationship’ provides “…a mathematical basis for understanding the forces that make up the percussive blows of karate”, it doesn’t fully really explain what goes into these respective forces.

‘The Kinetic Chain’: Firstly, as previous as I previously stated, “one must attempt to maximize the mass behind the respective waza being applied”. This is achieved by engaging the entire body. To comprehend what this actually means, one has to understand ‘the Kinetic Chain’. Once again, in basic terms, this is the linking of the muscles throughout the body to optimally accomplish a single movement/action. The most powerful waza will activate multiple muscle groups; moreover, link these different muscle groups together in one fluid motion. This is something I’ve written and taught a lot about—not only pertaining to muscles but also to the joints—which, I learned via Asai Tetsuhiko Sensei’s teachings. In fact, for those who follow Asai Sensei’s karate, this is more important; however, today I am writing more generally and ‘muscle focused. If you are further interested, here is an article homing in on using the joints for ‘snap’—actually a more advanced ‘perspective’ than today—here’s a direct link: André Bertel's Karate-Do: The Kinetic Chain (andrebertel.blogspot.com)

Overall, the better you can “…link these muscles together (and especially, the joints) in one seamless and correctly ordered motion”, the more destructive one’s respective waza will be.

‘Body Structure’: Consider facing a pitcher with both a solid bat and a broken one. In the case of solid bat, it can transfer a large amount of force—as a solid piece of wood—into the incoming ball. Conversely, the broken bat, upon striking the ball, it will absorb a significant amount of force; thus, reducing the power of the impact to propel the ball.

With this example in mind, it is easy to determine that poor form and structure in uke, tsuki, keri and uchi will have the same results; that is, “your body will absorb back a percentage of the targets power. Therefore, we must train to reduce metaphoric breaking points in our body structure. In this regard, correct joint alignment will significantly (and simultaneously) increase the efficacy of karate-waza and help to protect our joints.

Lastly, I want emphasize the need for karateka to apply these in points in their physical training. In particular, from this basic understanding, one can test and refine techniques so that their maximum potential can be realized. Overall, while this article has been very generic, simple, and probably not that well written, I believe the content presented today is very worth giving attention to: in order to evaluate and improve percussive/impact power.