分解 and 応用 (BUNKAI and OYO)

To this day many people confuse 分解 and 応用. I have published a lot about this in the past, however, I decided to reiterate this important point due to this largely ‘on-going misunderstanding’/ ‘misconception’. To confirm, I need to stress that ‘this article specifically applies to the budo/bujutsu form of Shotokan’ and not necessarily other types of karate. Indeed, it is not uncommon for other Ryuha and Kaiha to utilize different terminology and approaches to training. Irrespective, I hope this article is still a useful read regardless of your background. 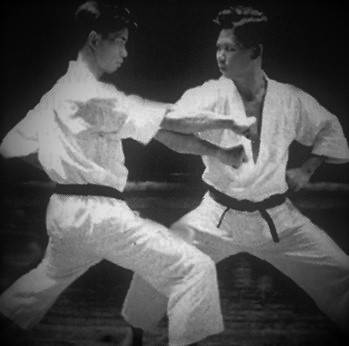 OK, so firstly, I want everyone to closely look at the kanji and meaning of both.

As you can see, the meanings are very different, BUNKAI is about breaking apart/dissecting things; whereas, OYO is about ‘pragmatic application’—at least in the case of those seeking effective karate; that is, 武術空手 (bujutsu karate).

If you have seen the ‘bunkai’ in Nakayama Masatoshi Sensei’s publications, hopefully you understand the aforementioned points. Otherwise, it would suggest that “…you believe Nakayama Sensei thought/believed he was demonstrating oyo”. This premise would require one to believe that ‘Nakayama Sensei had no idea about effective karate and unarmed fighting in general’, which is irrefutably incorrect.

This point, by itself, draws a line in the sand between bunkai and oyo.

So what is the point of bunkai in Shotokan if it’s not for real fighting? Please forgive me for repeating past articles, but, what I am about to say about this topic cannot be elucidated enough.

Breaking down the kata, that is bunkai, is literally for learning and refining kata movements and positions: “…for precise kihon execution”. Remember, the key technical characteristic of Karate is KIME. With that fundamental point in mind, Nakayama Sensei wrote "Irrespective of similarities in movement, anything without kime is not or ceases to be karate".

Conversely, oyo is using the waza and/or combative principles in the respective kata for practical self-defense.

Let’s reverse engineer how we look at this. Imagine if Nakayama Sensei had oyo demonstrated in his kata publications. The clarity of movements and positions would certainly be blurred and, in many cases, he would have probably caused a deterioration in people’s technical development: especially outside Japan where karate was in its comparative infancy and largely misunderstood.

Also, there’s two other major and interrelated factors: safety and responsibility. Most of the oyo from kata is utterly brutal. They are not about ‘fighting fairly’; rather, they are about life and death survival (in the case of an ‘unprovoked and life threatening assault’, which literally requires drastic countermeasures). Accordingly, in this desperate position, there are no rules and the oyo of karate reflects this.

With this explanation, I think the elements of ‘safety’ and ‘responsibility’ do not need to be spelled out. It reminds me of the old adage: “When the student is ready the master will appear”.

I’d like to add a little to this by saying something that might actually shock some readers. I actually really appreciate the bunkai in ‘Best Karate’ (Volumes five to 11), also Nakayama Sensei’s videos. That is because besides learning, in the dojo, "...this bunkai clarifies accurate initiations, trajectories and completed waza when performing the kata as a solo drill".

When I first came to Japan in 1993 I noticed the beginners classes, when learning a new kata, would be also taught this 'Best Karate' -like bunkai. At the time I scoffed at the how unrealistic it is. Later, however, I realized it was 'a tool used for better and faster learning of each kata'; furthermore, as I’ve explained above—no one has ever thought of this practice as being ‘the oyo’. After a little reflection, I found that this "...is yet another common gap between us Western and Japanese karateka". Moreover, the lesser of these gaps results in far better karate.

Lastly, I’d like to say that the next time you hear someone mocking Shotokan bunkai—you will now know—‘they simply do not know what they’re talking about’ (or they have learned 'sports Shotokan' only). Also, when you watch one of Nakayama Sensei’s videos or read his books, you will better see the kata movements and positions, via this ‘bunkai’ which, of course, makes them valuable! I only have one criticism of the videos… The music! I feel like if I’m seen, through my living rooms window (with that music playing loud enough) my neighbors will probably think that I’m watching a different kind of movie!!

Jokes aside, via ‘knowing the difference between bunkai and oyo’—and training them with this correct understanding—“..both one’s fundamental actions will improve, and also one’s street effectiveness”.

This brings me to Nakayama Sensei’s ‘Practical Karate’ series of books and self defense videos… This is a completely different ‘can of worms’ and has a very commercial story behind it. Accordingly, I will cover that in my next article. Until then, greetings from chilly Kyushu, Japan.