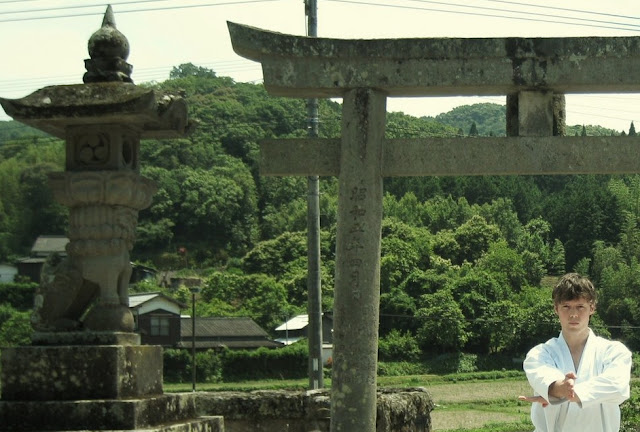 With a total of 20 movements 平安三段 (Heian Sandan) is the shortest kata in ‘standard Shotokan’. With the kiai applied on movements 10 and 20, and much use of Kiba-dachi, Heian Sandan is “…a very balanced formal exercise in a variety of technical domains”. The basis of Heian Sandan is primarily Jitte. This especially relates to the internal and external robustness of this kata: especially in regards to the ‘last moment reservations of twisting the body for large scale koshi no kaiten’ with fumikomi. However it’s also important to note that movements eight and nine in Sandan are a variation of movements 54 and 55 of Kanku Dai. In this regard, the escapes are reversed: in Heian Sandan the thumb side of migi shihon nukite rotates counter clockwise then, before hikite (uken migi koshi) is made—it goes behind the back. To conclude this action, the spin into Kiba dachi is seamlessly completed, with hidari kentsui chudan uchimawashi uchi being applied. Contrastingly, in the older Kanku Dai, the nukite rotates in the opposite direction and goes over the shoulder. Interestingly, the spin in Kanku Dai is completed with ‘Hidari uraken Hidari sokumen jodan tatemawashi uchi’; however, immediately after this, kentsui (like Sandan, albeit with yoriashi) is executed. In sum, it’s fair to say that we can see some ‘design process’ in this example; moreover, we can establish that the aforementioned actions are important. I will leave that there as...

Another feature in Heian Sandan, which I believe is worthy to mention, is its subtle yet highly effective unsoku including: fumidashi, tenshin, yoriashi, tsugi-ashi and, most obviously, fumikomi (especially pertaining to the aforementioned ‘large scale use’ of the hips). While this point may not sound so interesting, it really is useful “…for anyone wishing advance and revisit how they transfer their weight/move their center; also, how to ‘tighten up’ their unsoku”.

With this in mind Asai Sensei pointed out to me that that the two oizuki in this kata also ‘represent balanced bujutsu’: especially insofar as variations in application are concerned. The first of these is migi oi-zuki after tenshin; whilst the second is hidari oi-zuki followed by tenshin.

Before I go on, I should mention here that 25% of the actions in Heian Sandan are in heisoku-dachi (movements two, three, five, six and 11). The name which immediately comes to mind with this tachikata is Akihito Isaka Sensei. Often his entire sessions after eccentric stretching routines would be moving from this position into various stances aiming for the perfect coordination of hip action, moving of the center/stance and waza. The last time I got to experience that was in Yahara Sensei’s dojo several years back. A great group visiting from the UK were also training there at the time, so it is a fun memory!

Linking movements two and five to another instructor—which are both transferring from kokutsu dachi to heisoku dachi—I cannot avoid mentioning a gem here from Abe Keigo Sensei. He once explained that in these two waza “...one must maximize the ascension/elevation from kokutsu dachi to heisoku dachi”. What he was stressing was to maximize ground power (large scale power generation). Separately to movements two and five, he also focused on movements three and six. In these two stationary waza he taught that hip vibration must be used; that is, small scale power generation).

Yet another key point, from my notes here in Japan in the 1990s, is that Heian Sandan is the point where the instructor explains ‘why in Shotokan that we land in kiba-dachi’. Indeed the answer to this is not as much the tachikata as it is “…the attack with sokuto”.

Some rightfully relate the combination of chudan uchi-uke followed by chudan uchi-uke doji ni gedan-barai (and, indeed, the use of two consecutive ‘chudan uchi-uke doji ni gedan-barai’) to 鉄騎三段 (Tekki Sandan): some might even reference Jiin here also. However, while the applications are related, according to many of my seniors here in Japan ‘this was not in Itosu Anko Sensei’s design process’. That being said, I can’t help but question if that really is the case; moreover, what difference does it make if the applications are literally interrelated? I personally believe (have a theory) that such views come from post WW2 Shotokan, but that is a subject that I would not like to delve into today.

That aside, there are several milestones in this kata besides the aforementioned 360 spin, fumikomi and hip rotation, and dare I say ‘changing blocks’. The are two I feel that I need to accentuate, to give this article justice. These are: furi enpi flowing into tate uraken uchi; and lastly, the final two waza in the kata.

The furi enpi is a simple action, nonetheless, the follow up with uraken has two trains of thought. The common method is a direct and simple snap using the elbow as the fulcrum. This creates a very light and fast blow which is barely telegraphed. The majority of instructors teach this. However, in the 1990s I was told “…this is wrong” by Yahara Mikio Sensei in his typically intense manner. He passionately stressed executing ‘a large scale roll of the shoulder’ (in Asai Sensei's terms 'Shoulder snap'); thereby, instead of the uraken arcing up and over —directly from the side of the waist—the uraken seamlessly travels away from the waist (to the opposite side of your body), then makes a big loop past your opposite ear then down onto the target. Namely, the jinchu or bridge of your opponents nose. In sum, Yahara Sensei wanted to decisively turn this waza into a finishing blow. Needless to say, one could also see Asai Karate in this action as well. As a side note, from then on I followed this ‘way’ and, while I’ve been corrected by some of the other senior Japanese instructors, ‘The Boss’ (Asai Tetsuhiko Sensei) himself never corrected me when I did this.

On a practical note, I literally used this waza in real fight back in my hometown of Christchurch New Zealand. I was with one of my black belt students, Lyall Stone (who was a newly graded Shodan at the time), and a couple of guys decided to hassle me. One of the guys started questioning "did you just check out my girlfriend?" Lyall began warning them, but the guy kept persisting while I remained quiet and just monitoring him. His confidence began swelling, as he obviously deemed that I was 'too scared to talk', 'rudely ignoring his questioning', or some other faulty rationale. Finally I turned and briefly looked at his girlfriend and smiled at her. Immediately he pushed my chest and wound up with his opposite arm (I didn't see that, Lyall told me after). Immediately on the connection, for whatever reason, of his push, I reacted with a big tate uraken that literally smashed down his nose. He did not collapse but folded in half at the waist then stayed there motionless for a while. As he came up, I did not have to do anything else, both of this hands were covering his face with blood flowing like a tap. He was defenseless and clearly visionless. A blooded mess. I can't say here what I said to his friend, but they didn't stick around. The funny thing about this story is that 'I'd never thought of using this waza in a fight' EVER: it was unplanned, even off the radar for me, yet brutally effective.

OK, so on to the last two movements of Heian Sandan… There are a couple of things to unpack. Firstly, the tsukiage over the shoulder and simultaneous ushiro-enpi. In the most simple terms this is the ‘prototype’ of ‘close range rear self-defense’. In addition to this, the oyo is a large-scale nagewaza, which is a reoccurring applicative theme in this kata. Movement 20 is the same as 19, but on the opposite side with yori-ashi; that is, it is performed with no twist and turn. This waza (naturally also a prototype) elucidates the shifting of the center for strength; furthermore, the adjustment of position in the case of a rear defense when being grabbed from behind.

Here are the 11 different waza featured in Heian Sandan: