The term 刻み蹴り(Kizami-geri) translates as ‘cutting kick. Sometimes this confused and envisaged as being ‘what is this waza does’; nonetheless, like many things translated from Japanese to English, simple misconceptions can, and do, occur. If you follow this site, you might recall my article about the difference between 突き (tsuki) and a ‘punch’. This runs parallel with mistranslation of kizami geri and, indeed, so many other techniques/elements/aspects of karate.

Without going too much off topic, I should point out that “…this is an area in karate that requires a significant amount of metaphoric cleaning up”. This is because “…often concepts formed from misleading translations become ‘subconsciously rock solid in people’s minds’ and, consequently, not only impact on how they respective waza and principles, but also how they move and apply them”.

Okay! So let’s look at the meaning of 刻み (Kizami). When I think of this term, the first thing that comes to mind is actually  刻む (Kizamu). For example, when I cook, kizamu is like when I chop vegetables into smaller chunks for a homemade miso soup. In other words, I’m making smaller scale items to add to my dish.

Therefore, we can reject the incorrect notion of cutting someone with your kick and instead understand the kizami-geri (and indeed kizami-zuki) as a smaller scale waza. Furthermore, and actually more importantly in application, is that this ‘cutting’ is literally ‘cutting the 間合い (maai/distance)’. That is, rather than attacking with the rear leg (say a maegeri) or fumidashi/stepping through with the rear leg (i.e. – oizuki) the waza comes from the limb closest to one’s opponent: either the front arm/hand or front leg/foot.

Now, that ‘what kizami waza are’ has been properly defined. Allow me to fully focus on 刻み蹴リ技 (Kizami-keriwaza) in isolation and, most importantly, why they are advanced waza—not so much ‘to do’, but to make effective in the real world: which is the purpose of all budo karate-waza. To begin, I will briefly list the five ‘main’ generic forms of kizami-geri in Shotokan:

Certainly a sharp kick off the lead leg to the opponents testicles, or a nicely placed blow to the neck or head, can end a fight. But ”the true mastery of the kizami-geri is the capacity to finish the opponent via a chudan keriwaza”. Only with this capacity—and instantaneous adaptability—one has mastery of the kizami-geri, as this affirms its  reliability: irrespective of where you plant it. To clarify, the ultimate aim is to target the opponents spine and, in doing so, shatter whatever bones are between this objective.

Nowadays, people make a visually sharp looking kick and people assume expertise. On top of this, if they offer articulate narration, they are immediately deemed as experts (as I highlighted in a post earlier this month). The disconnection between ‘really being to use karate waza with devastation’, and the current ‘YouTube experts’ is profound. Again, as I posted earlier this month, don’t be fooled, ‘unless you only care about karate as a performance dance’.

Now let’s consider the complexities of the kizami-geri. It really requires extreme compression of the body, full use of the center, extremely sharp kicking snap, and plenty of brute strength/power. One has to have total commitment ‘maximizing high knee lift and support knee compression’, ‘ground power via the drive of the sasae-ashi (support/pillar leg)’ and ‘spring of the ankle’.

Tanaka Masahiko Sensei, who synonymous with keriwaza—especially kizami mae geri (and its variation kizami mawashi geri... please note: I will expand on this point in the near future)—developed 'lead leg kicks as strong as oikeriwaza'; that is, driving through with the rear leg. Above his obvious competitive success with this waza, he was devastating in dojo kumite with it and, undoubtedly, could use it in any setting. Holding the impact shield against Tanaka Sensei's kizami-geri, even in his mid sixties, was not a pleasant experience for anyone...

To quote Tanaka Sensei: “Failure, or the inability sufficiently damage the opponent with a chudan kizami geri, means that it is better not to use it, as the opponent will immediately switch or continue with offensive techniques”. That is, they will arbitrarily attack from over the top. With fully committed momentum and relentless aggression, in this position, one is likely be defeated: overwhelmed physically and psychologically.

In sum, kizami-geri is a highly effective waza, but only if one’s technical skill and strength is sufficient; hence, it is an advanced karate technique. Again, this point elucidates “…the void between mere ‘performance movement’ (within the controlled environment of practice), and actually being able to ‘effectively use’ a waza—against a strong opponent—in a serious confrontation.

This is a point I have learned directly from many of the great Shotokan masters here in Japan and is the tradition I practice; furthermore, endeavor to propagate.

In this way, while kizami-geri is just one type of karate-waza, it reflects the entire technical art of true karate; that is, the relentless seeking of ichigeki-hisatsu in every action. 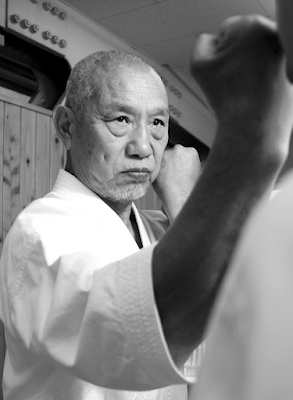