The forth Heian kata is the longest in the series with 27 movements. The kiai are on movements 13 and 25 (uraken tatemawashi uchi and hiza-tsuchi respectively). This kata and the fifth and final Heian kata summarize the first three ‘base forms’, moreover, contain more variations of self defense responses. These applications deal with varying circumstances and are more sophisticated; thus, require higher skill levels to utilize.

That being said, as Funakoshi Gichin Sensei emphasized: “… with mastery of the five Heian kata one can have confidence in their ability to defend themselves”; furthermore, “…the name 平安 in Mandarin literally translates as ‘safety’, which specifically elucidates this fact”.

While the kicks are practiced higher in training that is primarily for ‘solo form training’. With a training partner these waza are low kicks and are done in relation to where the opponent is to you. Yoko keage is the product of improved karate; that is, improved karate for practical self-defense. Rather than turning the hips to kick the opponents testicles—who is at your side—instead ‘keage’/‘kick up’ from directly where you are. This requires less ‘fine motor skills’ as sokuto is used, which requires less accuracy for impact and also produces what I call a ‘bulk action’.

Another stand out point is the large use of double arm techniques. Think about this for a moment. In total there are the two opening actions followed by juji-uke then chudan morote uke. And it doesn’t stop there! Finally, ryoken koshi gamae—movement five—concludes the double arm actions, but not for long. After the simultaneous uraken and yoko keage enpi is impacted onto to an open hand. Then of course is double arm open handed actions which conclude with sword hand attack and simultaneous jodan kamae.

Not long after this in movement 14 and 17 Chudan kakiwake uke is utilized, then the second to fourth advancement with chudan morote uke, in kokutsu dachi, are executed. Last but not least, on the 25th count, there is a cover and double handed head pull to impact with hiza-tsuchi.

Overall, we can readily see lessons from Kanku Dai in this form but, indeed also other kata such as ‘reverse engineering’ from Jion.

Notice the absence of Kiba-dachi after its extensive use in Heian Sandan? That's not a coincidence and is dictated by jiku/seichusen training.

A key technical aspect in Heian Yondan is te-ashi onaji, which is most notably challenged in the first two movements. Originally, these two waza were performed rapidly; however, Funakoshi Sensei increased its technical difficulty to more precisely be able to utilize in application.

Here are the 14 different waza featured in Heian Yondan:

To conclude I'd like to stress, yet again, that the Heian series were not designed for school children. However, they were used to introduce karate (into the Okinawa elementary school system) due to them being condensed variations of the classical forms, which were much less suited. Therefore, while they are not long kata, the applicative content they have is no less dangerous than their predecessors. This is why Master Funakoshi said what he did and should be closely noted. OSU! 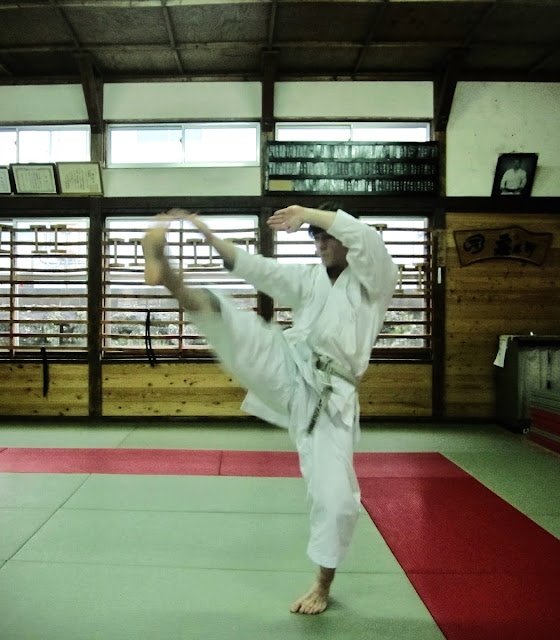