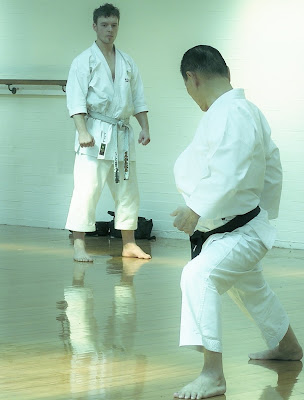 Studying under Asai Tetsuhiko Shuseki-Shihan, besides being technically rewarding beyond measure, in the karate sense, was physically very demanding for me. What's more, it actually became political due to the jealousy of others.
_______

The Beginning in 1993: Whilst our club switched to JKA (Matsuno group) in 1991, my first meeting and training under Asai Shihan was not until 1993. Asai Shihan took an interest in my karate and after that time, our relationship evolved into a sensei-deshi one. Not so friendly like you might think, but rather he began pushing me very hard.
_______


Special Treatment: Asai Shihan literally `told me' that I was grading above yondan, and from then on I never had to pay registration fees (for dan & qualifications). Sensei even paid me to travel to seminars and to Japan by reimbursing me in cash with amounts up to 300,000 yen on a few occasions. He sometimes even bought me clothing, once a nice coat that didn't fit me, but I was too scared to say anything.
________

Jealousy from some instructors: Besides the training which Asai Shihan put me through, such personal care I will never forget. Sadly the envy fueled by Sensei's kindness still causes a handful of instructors to seemingly despise me. I think that they should respect that Asai Sensei wanted to do these things. It is not like I could tell Asai Sensei what to do! Furthermore, what makes things worse, intensifying their jealousy, is that my karate technique and knowledge is a physical testament of the in depth training I received.

________
Ed Fujiwara Sensei & the Tetsubukan: Ed Fujiwara Sensei was one karate instructor who has always been supportive of me (Asai Sensei hooked me up with him on my way back from Japan in 1993). Anyway, this began another friendship with possibly Asai Shihan's most loyal student. Not coincidentally, the name of my dojo `Tetsubukan' came from Fujiwara Sensei, who's also ran an organization with the same name, under the Matsuno JKA. 'Tetsu' as in Tetsuhiko Asai, `Bu' (Martial Arts) and 'Kan' meaning (House).
________
An embarrassing and stressful event: Ten years later (in 2003) Fujiwara Sensei, on the recommendation of Asai Sensei, had me teach several koten-kata in Hawaii to him, and a handful of I.J.K.A students (including his son-in-law Rob Green, husband of Sensei Kim Fujiwara). Ed Fujiwara Sensei was so humble when I taught the class that he wore a white belt! When I asked him before the class "Sensei, why are you wearing a white belt? He softly said "Because you are Asai Sensei's uchideshi, and are passing on special technique to me from Asai Sensei." Needless to say I felt extremely uncomfortable due to Fujiwara Sensei's massive seniority to me in Asai-ha Shotokan-ryu, and his extremely close and longtime relationship with Shuseki-Shihan.

___________
Being let off the hook by Fujiwara Sensei: Little did I know that Fujiwara Sensei knew from Asai Shuseki-Shihan directly how intensely I was being trained (he knew what Asai Sensei had been doing with me over the last 10 years and was regularly keeping up to date). So when Asai Shihan told him "Andre-kun will be assisting me in Hawaii", and then told him to `host me for a kata class', Fujiwara Sensei arranged it without delay. Later on when I found all of this out, staying at the Fujiwara house, I felt very relieved!
___________
Besides hard training, other challenges have certainly come in my karate career. These are all learning experiences and the reality of human interactions and human nature. One thing I have learned over the years is that jealousy is the biggest source of trouble in the karate world. Regardless of all that, I just keep training, following in the footsteps of Shuseki Shihan 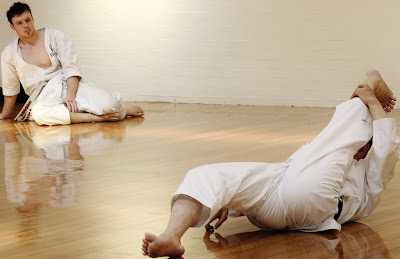