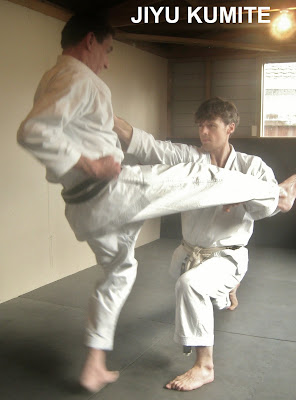 The definition of ‘Kumite’ by the late Chief Instructor of the Japan Karate Association, Masatoshi Nakayama Sensei, is worthy of much reflection: “Kumite is a method in training in which the offensive and defensive techniques learned in the kata are given practical application. The opponents are face to face. The importance of kata to kumite cannot be overemphasized. If techniques are used unnaturally or in a forced way, posture will break down. And if the kata techniques become confused when applied, no improvement in kumite can be expected. In other words, improvement in kumite depends directly on moving in kata; the two go together like hand in glove. It is a mistake to emphasize one at the expense of the other. This is a point to be careful about when practicing kumite.” - MASATSOHI NAKAYAMA `BEST KARATE 3: KUMITE 1'.
___________

Nakayama Sensei goes on to explain three broad categories of kumite. I will continue to directly quote him here: “Basic kumite, jiyu ippon kumite and jiyu-kumite are three types of kumite. 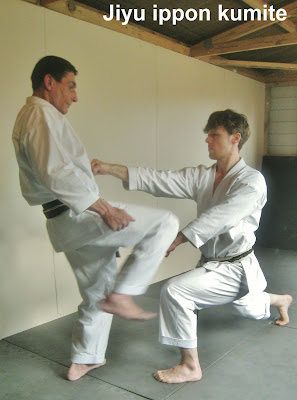 Basic kumite
In this most elementary form of kumite, the opponents take a fixed distance from each other and the target is agreed on beforehand. They then alternately practice blocking and attacking. This may be done as a single block and attack–ippon kumite–or a series of five–gohon kumite. 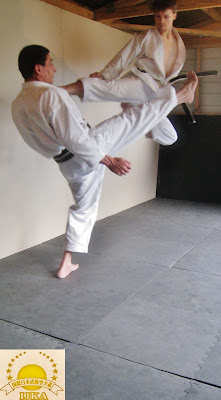 Jiyu ippon kumite
The late Minoru Miyata was my classmate and a colleague of mine since the founding of the Japan Karate Association. From his long years of experience, he held a clearly defined view of jiyu ippon kumite and jiyu kumite. Since he was a man who capabilities were highly evaluated by others and one whom I had very great confidence. I would like to quote him on this subject. The method of jiyu ippon kumite is this. Both men take a kamae freely at an optional distance. Announcing the area he is aiming for, the attacker attacks decisively. Against this the blocker freely uses techniques he has mastered and counterattacks at once. This is a training method; the purpose is to put into actual practice the techniques of offense and defence. This is jissen (actual fighting) kumite.” - MASATOSHI NAKAYAMA `BEST KARATE 3 - KUMITE 1'. Nakayama Sensei doesn't mention Kaeshi ippon kumite in 'Best Karate' but for those who do not practice Shotokan, I believe it is best defined (in brief) as "a form of Jiyu ippon kumite which develops `attacking zanshin".

In regards to jiyu kumite, Master Nakayama, more than anything else emphasized to “avoid engaging in jiyu-kumite prematurely”. His reasoning was based on the problem of people just `playing around trying to tag each other or engaging in some lame form of boxing'. Whilst jiyu-kumite is controlled, unless the control is there to stop seriously hurting the opponent, it is counterproductive practice. Jiyu kumite must be perfectly reflective of kihon, kata, kihon kumite, jiyu ippon kumite & its various forms such as kaeshi ippon kumite. Therefore, all forms of kumite, including competition kumite, must be geared towards karate as an effective martial art of self-defence. 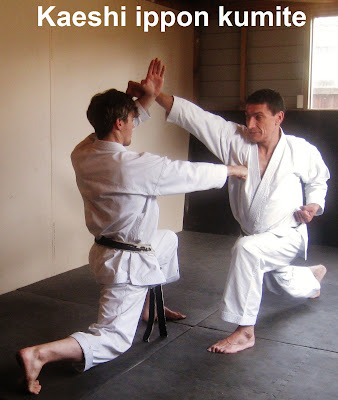