I was asked about ENBU with Asai Sensei, so i'll answer that today. 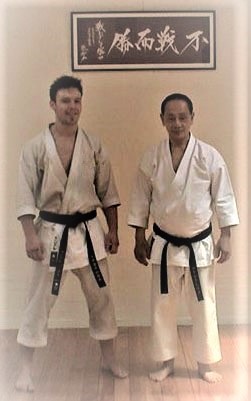 When doing enbu (demonstrations) with Asai Tetsuhiko Sensei I learned quickly to not attack randomly. In the few times I did attack him randomly, it turned into freestyle, which resulted in Asai Sensei injuring me. I even experienced one bone fracture, which really  needed surgery (but I decided not to, to keep it as a trophy: which shocks people still to this day, and I'll certainly treasure and feel it, until I’m gone).

Accordingly though, for my self-preservation, I ascertained that in demonstrations with Sensei it was better to attack him from gedan-barai with simple kihonwaza—like Kihon Ippon Kumite.

I must add here that, the simple basic attacks in demonstrations are important when teaching others, as it allows the trainees to clearly understand what the ‘learning objectives’/’skills to be attained’ are. In sum, it makes things 'clean' as opposed to being blurred.

One of the major reasons, why Asai Sensei’s karate is so interesting for me personally, is that I was physically stronger (in the muscular sense) than him at any point in his life. We talked about this a lot. He kind of mocked me about it, but with lots of laughs. I’m not bragging by saying this, as I am not big, nor a particularly strong guy. However, he was a small built guy by Western standards, and even small built here in Japan. Still, via his relaxation, flexibility and incredible depth of technical excellence, his impacts were worse—than that of anyone else—I’ve ever experienced (firsthand). That is one of the main reasons I became studious about Asai Sensei's Karate.

I felt feeling Tanaka Masahiko Sensei’s power was similar; however, the difference was Tanaka Sensei’s waza felt like a sledgehammer, whereas Asai Sensei’s waza felt like a sharp blade. I feel really bad that I can’t explain it so properly in words, but these masters (and indeed, the other 'true greats'—all successful competitive fighters—Japanese and non-Japanese) are just really incredible and highly deserved of their respective fame. All of these people, I am referring to, are equally (or near equally proficient) in both kata and kumite; that is, 'kime' is always there: something which I followed on my karate journey. THIS IS BUDO KARATE.

There are many seniors, above me, in the practice of Asai Sensei's karate; however, we all know his karate, and know that he has set a standard that is 'in the clouds'.