Here are all of the videos from my seminars in Germany and Italy (January/February 2012). When time allows I will post one more, which will feature some different points. Please note that these videos are not on my channel nor were made by me. I was just training and teaching karate-do as usual. The full credit goes to my friends and fellow karateka, Oliver Schomburg, and Silvio Cannizzo (who both also trained very hard). Enjoy and please feel free to make some comments. All the best, Andre
______________ 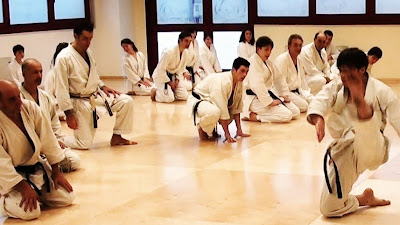 Below is an embedded video from my recent seminars in Mira (Venice Italy) at the new dojo of Mauro Mion Shihan - 7th Dan.

The video was created by my dear friend Silvio Cannizzo Sensei - 5th Dan, and kindly filmed by his son Erik. Domo arigato gozaimasu! 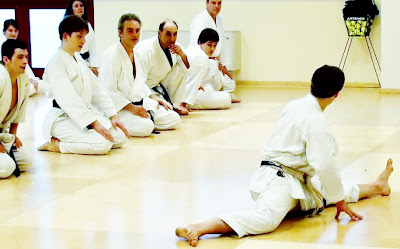 To see the other films from my January/February 2012 seminars in Europe please scroll down the following article: http://andrebertel.blogspot.co.nz/2012/02/andre-bertel-2012-european-seminars.html

Posted by Andre Bertel at Monday, February 20, 2012 No comments:

It was once again a huge 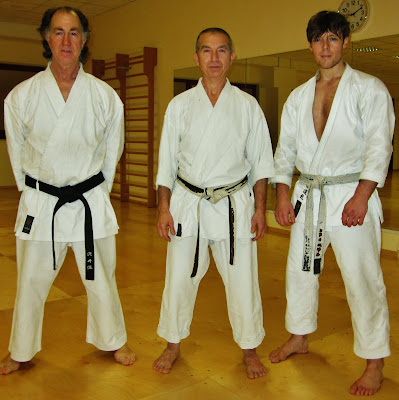 This year the core focus was on tai no shinshuku (the contraction and expansion of the body) for effective martial arts karate - as defined by my late teacher Shuseki-Shihan Tetsuhiko Asai. The kata taught was Shotei (Dai). This koten-gata is focused on employing teisho (shotei) and other open hand techniques such as koken (kakuto), haishu, shuto and haito. The focus was on creating `extreme power' which if released, without careful control, is uttery destructive.
I will not outline the seminars, except to say that they were fantastic, and for the members of Mion Shihan's 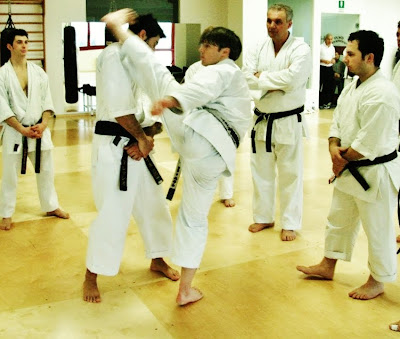 Organisation. IT WAS TRULY A SPECIAL TRADITIONAL KARATE EVENT IN ITALY. Next time, we will cover an even higher level of Asai-ha Shotokan-ryu to compliment the diversity of the previous two courses. Sadly, many could not make it due to the terrible weather conditions in Europe, which unluckily hit Italy during the seminar weekend.

I'd once again like to thank Mion Shihan (7th Dan), Silvio Cannizzo Sensei (5th Dan) both pictured with me above, and all of the karateka who participated in the seminars (also as pictured). Overall, there was strong spirit in the dojo throughout, so I felt like I was at home. Until next time. OSU! 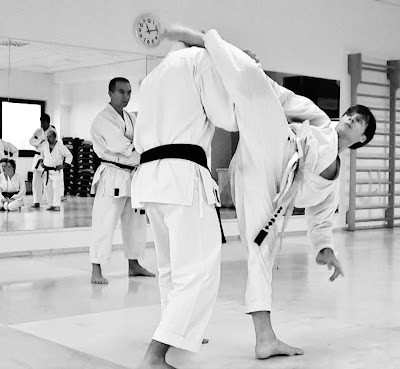 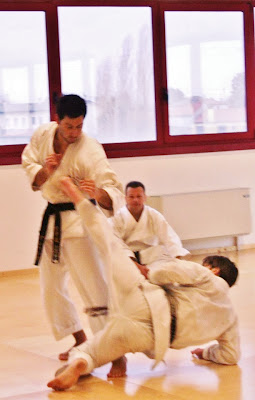 Posted by Andre Bertel at Sunday, February 19, 2012 No comments: 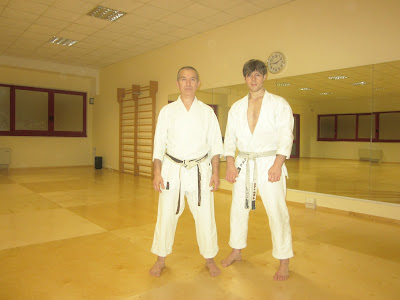 Mauro Mion Shihan (7th Dan) is not only an Italian master of Shotokan Karate but also an exceptional human being whom I have great respect for.

It was an honour for me to be once again invited to Italy to teach Asai-ha Shotokan-ryu Karate at his fantastic dojo in Mira, Veneto.

As I've said before, his class is a "must do" if you are visiting Venice and are interested in studying traditional Shotokan Karate-Do. Here is a link to his organisations homepage: http://www.jksitalia.it/ 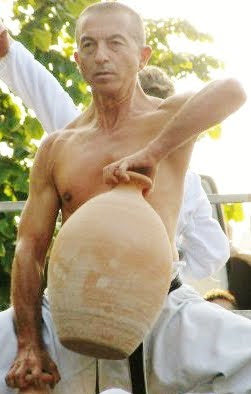 I would once again like to thank Mion Shihan very much. Domo arigato gozaimashita! 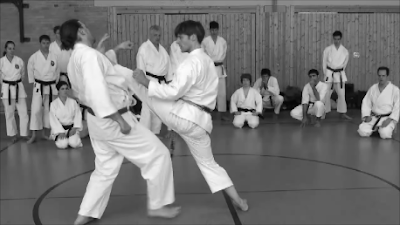 Along with some images here are a couple of reports on my recent Karate-Do Seminars in Ahrensburg Germany. As more reports are written, and photos/videos are availabl 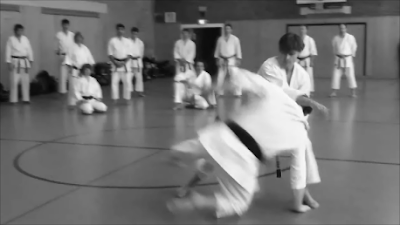 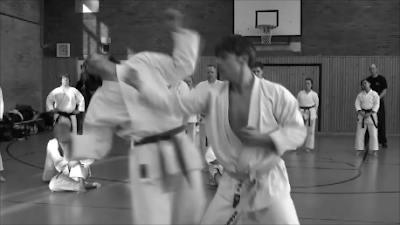 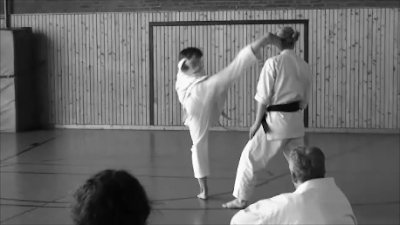 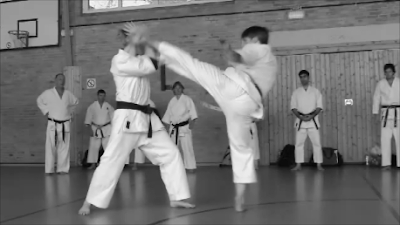 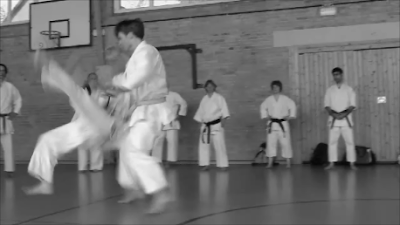 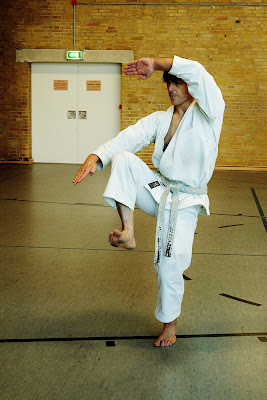 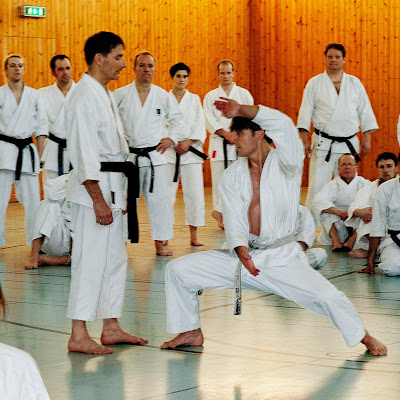 Posted by Andre Bertel at Friday, February 17, 2012 No comments: 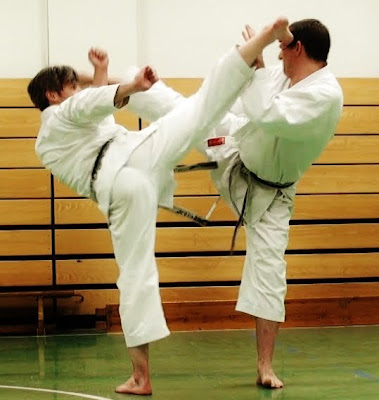 I once again greatly enjoyed teaching classes at Sensei Stefan Scharnweber’s Hamburg Karate-dojo. I was introduced to Stefan by Oliver and Yan Schomburg two years ago when I taught IJKA Karate there.

Stefan is the kata coach for Northern Germany and besides having excellent Shotokan technique is a really neat guy. Like me, an Unsu man! For example when driving a red light is what he refers to as “cherry green”… He is a classic Sensei, so I can’t wait to host him at my home in Japan when we are back there.

Away from his humorous side he is a direct student of the late Taiji Kase Sensei and has graded to Godan (5th Degree Black Belt) under the legendary Hiroshi Shirai Sensei. And now, for the last two years, he has been studying Asai-ha Shotokan-ryu with me, so with combination of karate “Kase-Shirai-Asai” he has a lot of traditional karate knowledge.

Anyway, the classes I taught at his dojo in Hamburg were focused on the coordination of koshi no kaiten (hip rotation), tai no shinshuku (the contraction and stretch of the body), and junansei (which is basically ‘softness’). Added to this were Miyamoto Musashi’s strategies of Sen No Sen, Go No Sen and in particular, Tai No Sen.

Overall, the sessions were a fantastic set-up for higher level training, which Stefan and I discussed for the development of traditional karate-do in the Hamburg region. When I return there will be a Jokyu (high-level) course of IJKA Asai-ha Shotokan Karate, which will come straight from Asai Sensei’s socho-geiko. This time, I was proven sincerity and strong kokoro. Many thanks to Stefan Sensei, Marcel, Piotr, Thomas and all the other members at the Hamburg Dojo. OSU! 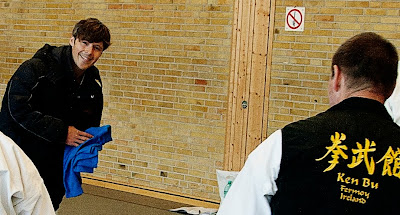 It was great to finally meet Brian Toomey Sensei - 6th Dan who attended my seminars in Germany.

He is my senpai (senior) in Karate-Do and is a hard training budoka; moreover, he is a super person with a great sense of humour! 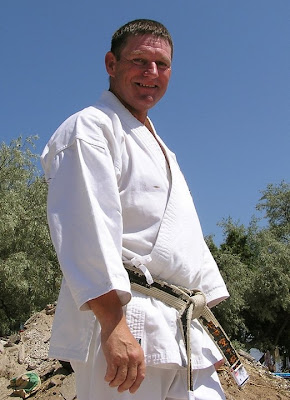 Posted by Andre Bertel at Thursday, February 16, 2012 No comments:

This is the first of several posts I will make on my 2012 karate seminars in Europe. It was great to teach Asai-ha Shotokan-ryu in both Germany & Italy again, and catch up with friends!
Considering the terrible weather in Europe (which has made international news) the amount of participants in my classes were surprisingly high; nevertheless, many were stopped from attending due to the treacherous conditions.

Anyway, rather than talk a lot, I'll begin by embedding links to four videos (kindly made and posted by Oliver Schoemburg) and let the karate talk for itself. Furthermore, these seminars mark the beginning of my sharing more advanced techniques, applications, and principles of my late teacher Shuseki-Shihan Tetsuhiko Asai. More photos and videos to come, so stay tuned!