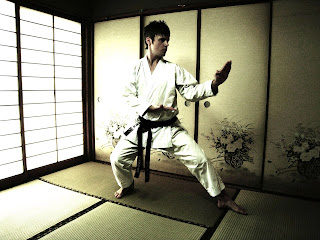 In the last two months I have received some emails from people wanting to access my older posts. For your convenience I've provided the links here. All articles can just as easily be accessed from the Blog Archive ('big green menu') located on the right side of the screen. 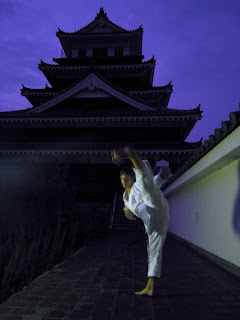 Kihon (Evening practice): For kihon I covered several of the drills Sensei consistently worked on in morning practice. I also went through the alternative dan grading syllabus that he advocated (photos kindly taken by my wife when I was training). Overall my focus was on 'tenshin', 'snap', 'muchiken', 'keriwaza', 'ashi-uke' and Asai Sensei's infamous 'three styles' of karate.
____________
Kata (Midday & morning practice): I covered only a few kata (not all 63 Asai-ryu kata like last year), namely Sensei's three favourite standard Shotokan kata, Tekki Nidan, Empi and Nijushiho; and several of his 'own kata', including Junro, Kibaken and Joko (for basic training); plus Kakuyoku-nidan and Hushu (for advanced training). 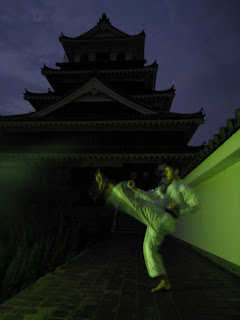 ____________
Whilst not being three endurance sessions, I still lost a lot of sweat with the humidity of the Japanese summer. The practice sessions were great because as planned, they allowed me time to really think about what Asai sensei taught me over the years, and also the many enjoyable social times we spent together.

I have little to say in this post, as today is all about intensive training, in remembrance of Tetsuhiko Asai Sensei.
As today marks two years since 'Shusekishihan' passed away, I will lower my zanshin and use the training as a vehicle to reflect on my late teacher.
My best wishes to each and every other person around the world doing a special training today in memory of Sensei. I'll conclude this post with a couple of internet links well worth reading/watching on this day of remembrance.
OSU!
________________
SOME LINKS FOR ASAI MEMORIAL DAY:
This video was televised at Asai Sensei's funeral (composed by Hoshimi Asai). I was greatly honoured as it included several clips from the New Zealand TV demonstration Asai Sensei asked me to assist him in. Especially check out Sensei's muchiken take down (right before he's shown punching the makiwara). Incredible waza! This style of technique is how I'll always remember Sensei): CLICK HERE: http://jp.youtube.com/watch?v=-eKqto-MoRs also an article in June relating to this video footage: http://andrebertel.blogspot.com/2008/06/personal-training-from-asai-sensei.html
________________
Last years Asai Sensei Memorial Training (my last years memorial practice posted on this blog - just one of many around the world): CLICK HERE: http://andrebertel.blogspot.com/2007/08/on-this-very-day-august-15th-last-year.html 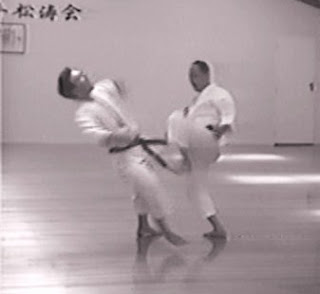 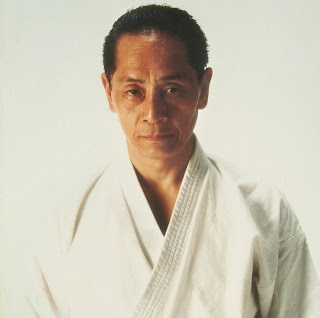 I decided to slightly increase my self-training during our Obon holiday which started on Saturday. This evening on completion of day four, my body is really feeling it! The additional practices really shocked my muscles from day one.

My Saturday training session, under the tuition of Tachibana Shihan (8th Dan), was harder on my legs than usual as I'd already trained twice, firstly in the morning (kata; precisely following my current 'fixed' routine) and secondly in the early afternoon (kihon, namely the ido-kihon for the cha obi and shodan exams) therefore I will not describe these sessions in detail here. Fortunately I managed to get through the dojo training with my burning thy muscles, feeling much better by the end of practice. I'll briefly give an overview of this lesson here:

Jodan age uke - The Asai way: We initially practiced stationary migi chudan gyaku zuki from tateshuto kamae 30 times, followed by jodan age uke kara chudan gyaku zuki 30 times, then chudan gyaku zuki kara jodan age uke 30 times. We then switched and repeated on the opposite side. Physically the hardest point of this training was the deep zenkutsu dachi we remained in. My quads were on fire. Shihan emphasized exact shomen, hanmi, hiki-te, shisei (posture), power from the tanden/hara, and uchi momo (the inside thys). The main focus in this class was on jodan age uke, the way that Asai Shuseki Shihan taught it. Tachibana Shihan demonstrated this technique focusing on shoulder snap, and natural energy by 'swinging' the block. We applied this by using age uke to attack the opponent and/or destroy their balance from a variety of angles, which Shihan demonstrated several times as he learned directly from Shuseki Shihan. This led onto partner drills up and down the dojo with the attacker firing three jodan punches (jodan oi zuki, jodan gyaku zuki and jodan maete zuki) with the defender blocking with jodan age uke (hanmi), jodan age uke (gyaku hanmi) and jodan age uke (hanmi). This was again repeated against three jodan heiko zuki with the attacker making ryo seiken hiki-te (loading up again for the next double punch) after being blocked by the defender. In all cases, snap, swing and correct positions of the hips, ankles, and posture, were closely monitored. 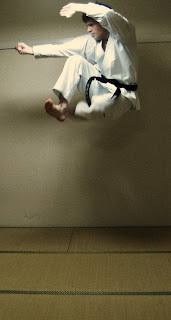 Kata: Kata covered were Heian-sandan (including one time in reverse), Tekki-shodan, Kibaken-shodan, and Jitte; three or four times each. Fundamental comparisons were made between the positions of the elbows in Shotokan-ryu techniques in 'Best Karate' style (namely Heian-sandan and Jitte, but also Tekki and Kibaken). Tachibana Shihan gave special attention to Jitte by initially taking us through it very slowly. He explained and demonstrated each technique, during which I was given some valuable advice on my bo tsukami uke. The class ended with Kihon Ippon Kumite in grading syllabus fashion (jodan oi zuki, chudan oi zuki, chudan mae geri, chudan yoko kekomi and jodan mawashi geri with free-choice defenses, and counterattacks).

Sunday Training Sessions: The first two practices on Sunday were dedicated to the kihon in my current routine: (http://andrebertel.blogspot.com/2008/07/my-latest-training-routine.html) with special attention given to mawashi geri in isolation, and the final renzokuwaza with jodan soto uke. The training was very tough and revealed some new weaknesses I'm determined to erradicate. The third training session was altered from my current routine to include Jion, Junro-shodan, Kibaken, Kanku Dai, Sochin and Kakuyoku-nidan. Much of the time was committed to Jion and Junro concentrating on the fundamentals which I'm currently honing. A physically and technically demanding practice to say the least.

Monday and Tuesday: Focus has been on kihon keriwaza, and Kakuyoku-nidan in preparation for the memorial practice for Asai Sensei this Friday. Today was special as I did a beach training taking advantage of the 30+ tempratures. Much of my kick training was done balancing on rocks fighting a strong breeze. The warmth and soothing wind made hard training seem easy. Kata practice on the beach was typically challenging for the exact application of level hips, due to a sloped, and 'soft sinking' surface. I often entered the water. To be completely honest, as tired as I was today after the high repetitions, it was more difficult to keep a smile off my face, as the training was so much fun.

I must like pain, as I'm greatly looking forward to tomorrow's practice sessions. But I'm sure I'll be waking up with plenty of lactic acid to reduce my enthusiasm. All the more reason to train! Where ever yo 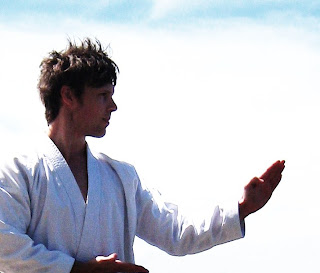 u are in the world let's train hard together in the spirit of true karate-do.

My wife Mizuho and I just returned from a wonderful holiday in Okinawa where we spent the best part of a week. We stayed at the beautiful Okinawa Harborview Crowne Plaza in Naha and enjoyed a luxurious room and superb hotel service. I say this here not to brag but rather to recommend this excellent hotel to anyone if they are going to Okinawa to do karate. On this trip to Okinawa we only visited one private island opting to stay on the mainland, this allowed us to accomplish more.

By complete coincidence I visited the 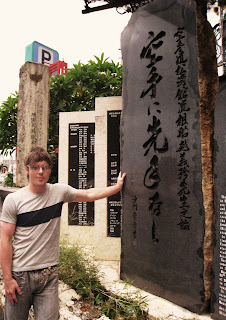 Gichin Funakoshi Monument, which was literally located right next to the rental car company we were taken to. It was so unusual because the location of the monument was on such a tiny street, and hidden from the majority of passerby’s, except for those cued up at the small traffic light beside it. Regardless, it was nice to finally see a monument for Funakoshi Sensei in Okinawa.

All in all I really enjoy visiting such areas as Shuri, Motobu and Tomari as they are such important locations in the history of karate. Shotokan practitioners should not forget the links we have to the traditional karate of Okinawa. Whilst Shotokan’s technique has advanced via science, we must never forget the origins of our art, especially in regards to functional application. The present-day lack of street effectiveness, I believe, has come from the increased emphasis on ‘playing karate’ (sports karate). This problem is also in Okinawa, however, more dojo in Okinawa have retained and practice the effective applications of the kata. 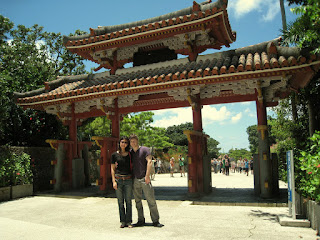 It is my belief that Shotokan karateka, do not need to change style, but rather understand the ‘pre-competition karate’ of Okinawa. Understanding the karate of Okinawa can help us more effectively dissect our kata for practical application (bunkai-jutsu/oyo-jutsu). Doing this means that Shotokan 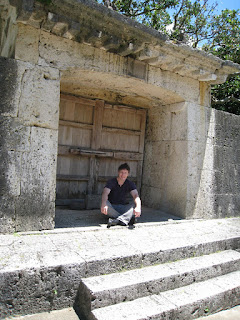