Here in Japan I've never been asked "Anata no karate ryuha wa dore desu ka?" ("Which karate style do you do?") Hey! Just like you, I am a person! I'm André Bertel, not a style...
_______
Amusingly enough, one of the biggest questions 'outside of Japan' amongst karateka, is exactly that... "What style do you practice?" Ironically, here in Nippon, whilst politics obviously still exist, there is just karate-do, competition and traditional. The biggest divisions are not style, but rather the manners/main objectives of training.
_______
The three main 'manners of training' are: (1) Full-contact karate - get in the ring for a KO (such as Kyokushin, Seidokaikan and others); (2) Sports karate (focused on WKF rules competition karate) - look pretty doing kata and tag to score points in kumite; and (3) Budo/Bujutsu karate, which is focused on 'ippon technique', that is karate (kihon, kata and kumite) with a 'single killing blow' as the prime objective -"Continued life or death in an instant."
_______
So when someone says they practice Uechi-ryu, Wado-ryu, Shorin-ryu, Seido, Goju-ryu, Shito-ryu, Shukokai, Kyokushinkai, Ryuei-ryu, Shotokan etc.., it really doesn't say much. The real issue is how they practice, and what they sincerely practice for. Do they train for full-contact fighting, sports karate, or for application in the real world. One may argue that they train for a combination of these, however, this is impossible, if a reliable level expertise is desired in any of these fields.
_______
This is the reason why I accept, and respect, all styles of karate, and all martial arts. Regardless of style, some people are prize fighters, some are sports players and some are lethal weapons. Style does not establish this. To me, all that matters is 'what people train for'. The best karateka in the world are one's who train for reality, the single finishing blow, because regardless of style, they are the people who are keeping real tradition of karate alive.
© André Bertel, Japan (2009).
Posted by Andre Bertel at Monday, July 20, 2009 No comments: 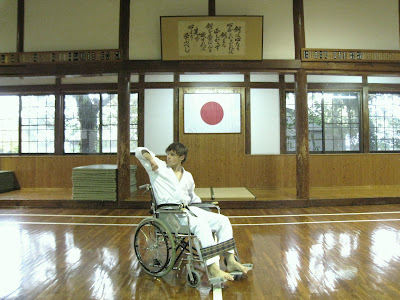 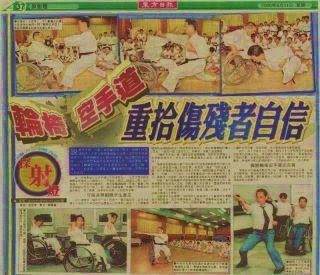 ured and/or unwell. However, lesser known is the fact that he also developed kurumaisu karate for able bodied people. He even created special training routines in which people practicing on wheelchairs and standing, could simultaneously follow together (often with people being seated on wheelchairs and standing alternately throughout the session). For example whilst the karateka in wheelchairs turned their chairs diagonally with jodan age-uke followed by uraken tatemawashi uchi, the standing karateka would pivot into kiba-dachi with the same techniques. Sensei proudly stated “Kurumaisu karate has been my biggest contribution to broader society, especially in regards to social inclusion. My dream is to see it in the paralympics.”
__________ 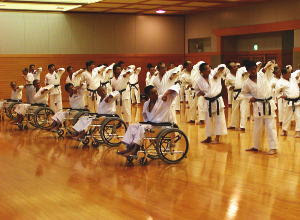 Wheelchair karate competitions: A good point to mention here, is the fact that both able-bodied and disabled, are permitted to enter wheelchair karate competitions (they are not divided into separate categories). Asai Sensei’s explanation of this was “We do not regard kurumaisu karate as an inferior method of martial arts training. In many ways it is more difficult than standing karate as one must have superior junansei (softness) and shoulder snap if they are to be effective. Male and female, handicapped and not handicapped, everyone competes together, everyone is included.”
__________ 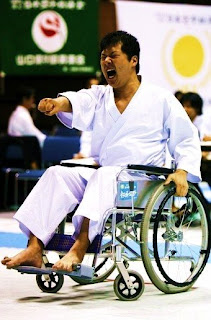 The technical benefits of Asai Wheelchair Karate (The perfection of upper body joint snap): Asai Sensei explained that kurumaisu karate is for all karateka because it more effectively trains upper body snap. He stated “You have to master snapping the shoulders, elbows, and wrists, and using the waist and backbone without the drive of the legs. This requires softness. It is therefore isolation training.” He also emphasized his philosophy of seated, standing and jumping karate. “You must be able to do effective karate whilst seated and in an unstable position, and because a wheelchair rolls around, it is such a position.”
__________


I'd like to conclude by saying that I hope this article has furthered your understanding, of what Asai Wheelchair Karate is, and what motivated Asai Sensei to develop it. 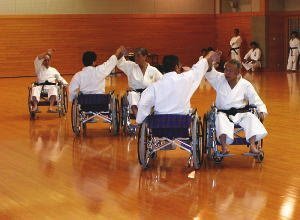 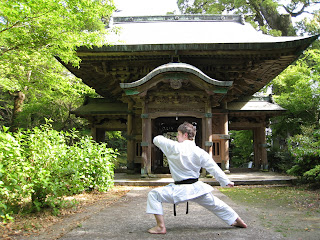 Here's my updated self-training routine. Presently in Japan the boiling heat, and especially the humidity, is very draining, so often fatigue presents itself much faster than usual. However, the ease of warming up and deep-stretching is a great trade-off. There is nothing I hate more than lame excuses to avoid keiko! In the cold, karate warms us up, and in the extreme heat, our suppleness can be more readily be increased. My advice to everyone is to focus on the positive, and better oneself via karate-do, regardless of environmental factors. NO EXCUSES - JUST TRAIN! All the best from sweaty Nippon, André Bertel.
________
A. Stationary kihon
My stationary kihon at the moment comprises of a vast array of different foundational techn 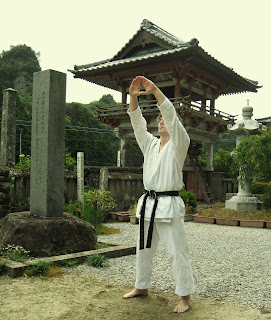 iques. Each day is dependent on what I feel I have to work on. For example high knee lift and compression for keriwaza, timing of hip action in punches, strikes, blocks and kicks and so forth. Regardless of what I do, it is always "as simple as it gets", the "basics of the basics". Nevertheless, I'm challenged to the maximum physically (by the high repetitions & humidity) and technically (by the numerous weaknesses that I have to correct)...
________ 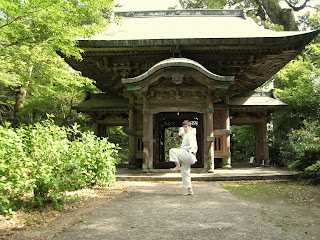 C. Kata
(a) Jion or Kankudai.
(b) Empi.
(c) Unsu.
(d) Another Jiyu kata (Shotokan-ryuha or Asai-ryuha) based on my daily feeling/personal training focus.
________
D. Kumite: Goshin-jutsu
My present focus is on practical/street effective goshin-jutsu (self-defense) techniques. The source of these waza are the kihon, and kata, that I’m currently refining.
________
E. Supplementary training
To supplement my technical training I'm following Asai Sensei's special strength and flexibility routine (which he often included in his morning practices). I'm also sitting in the full splits for extended periods to relax my muscles (at the end of practice) whilst getting rehydrated. 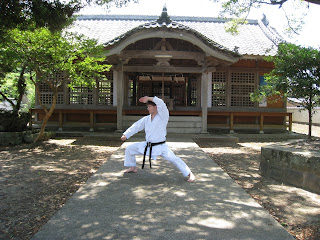 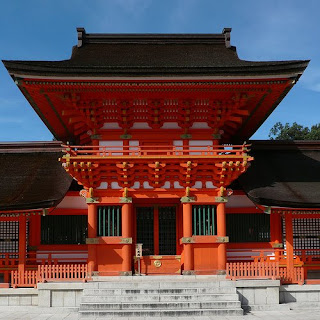 Please excuse my lack of posts as of late, I've been 'very busy', and simply have had no time. In saying that, I have plenty of articles still in the works, videos to upload, and so forth. So please bare with me!
__________

I'd like to take this brief chance to thank all of my readers from around the world. I sincerely hope that my blog continues to assist you, where ever you may be. Over the last couple of years I've received so many wonderful emails from people of every ethnicity. All who mutually love the art of traditional Japanese Karatedo. Such letters always put a big smile on my face. Karate never ceases to amaze me, in regards the development of strong international bonds, regardless of cultural differences.

My kindest regards to you all from Nakatsu City, Oita, Japan.