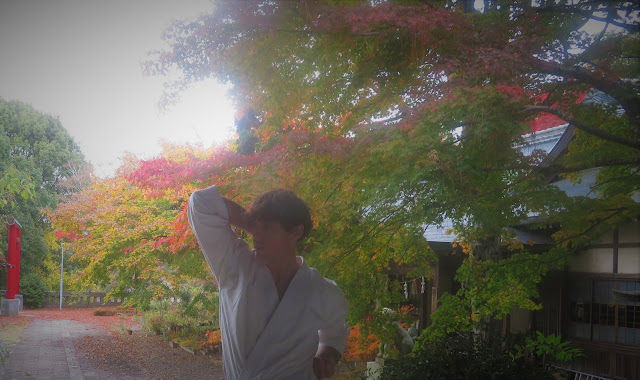 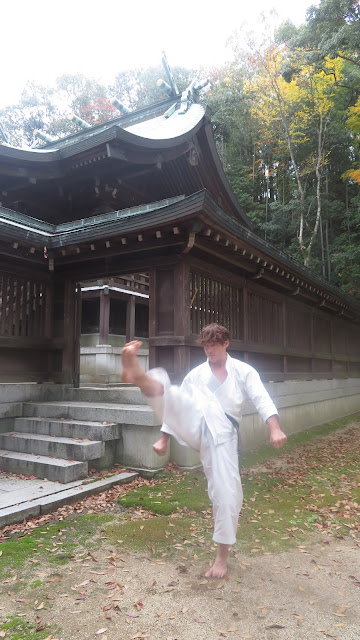 Training in nature is an important aspect of 'extra practice' for me - outside of the standard work in the dojo. Initially in my youth it was simply to be in a nice environment and for the fresh air. Later, I started learning from practicing on different surfaces, rocks, sand, inclines, declines, etc... While these advantages of training outside still apply, I acquired much more important gains from this practice. That is, to see how small and insignificant I am in comparison to nature; furthermore, to attempt to expand my energy into the environment. 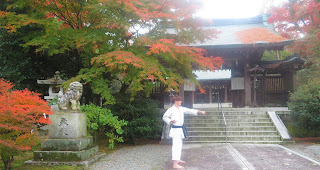 Indeed, power can be expressed much-much easier in a confined place, and the bigger the space gets, this becomes more of a challenge. This is why it is harder to express power in say, the Nippon Budokan, than it is in your dojo. In this regard, being in nature is the ultimate test as it far transcends any human-made gymnasium.

As I have stated in the past, I was shocked when I first came to Japan in the early 1990s. In New Zealand, if I trained outside, for the most part, I’d practice at the local park. And, indeed in summer, at the beach. Immediately when I attempted to do that in Japan (to train at a park or leisure space), I was surrounded by kids and parents. My practice ended up becoming like a demonstration. People were of course really nice, but it was difficult to train seriously and keep myself on target.

This was only my first attempt at training in a Japanese park. So, I thought it was probably just a one-off… But to my surprise, when I tried again, the same thing occurred. I decided to not give up! So, I went to another park, which was smaller and more hidden. Still the kids and parents seemed to come out of nowhere.

As it was my first time here in Japan, I was doing a lot of sightseeing. It suddenly occurred to me, many of the places I was exploring were empty… The traditional places such as the more obscure Jinja (Shrines) and Tera (Temples). At best I’d see just a handful of people, if there were no special events being held. 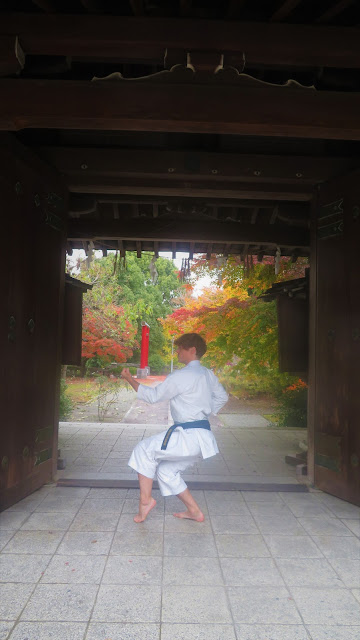 While I have no belief, nor interest, in the religious activities of these places, I recognize the architectural beauty of the buildings—especially when set in lush nature. In particular, such traditional Japanese structures ‘based in thick forests and the mountains’ provide an excellent practice environment, which minimizes disturbances and most importantly: ‘challenges the expansion of one’s energy’.

To conclude, I hope you enjoy the attached pictures from yesterdays training in beautiful Taketa City, Oita Ken. 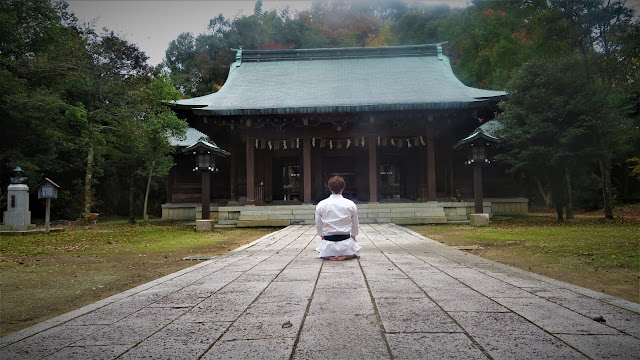 Posted by Andre Bertel at Thursday, November 19, 2020 No comments: 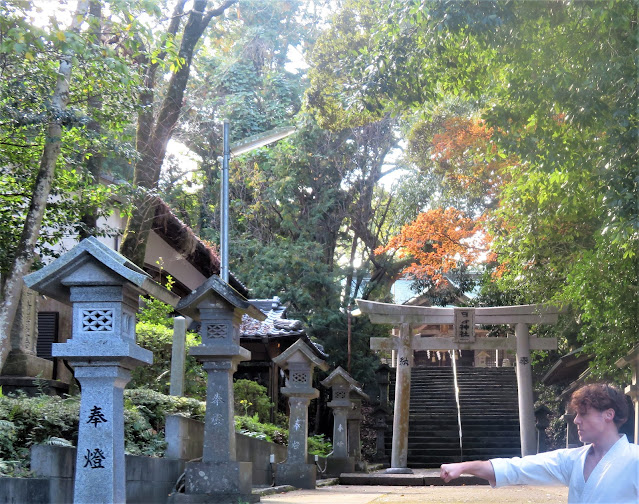 One thing many karateka fail to do is to focus on developing ‘really destructive’ punches, kicks and strikes, which are our ‘the main weapons’ in our art. Indeed, the sweeps, takedowns, and grappling techniques are absolutely imperative in Budo/Bujutsu Karate; however, the percussive blows are—as I said already—THE MAIN WEAPONS. Even if we finish with a shimewaza (choking technique) or likewise, with a nagewaza (throwing technique)—a percussive blow is what gets us there. Furthermore, in the case of a very serious situation, an impact (or series of impacts) may follow “…to ensure the opponent is not only down, but stays down.”

Put another way “PERCUSSIVE BLOWS are ALWAYS a part of the equation”; whereas, the other waza, when employed, are used in combination with them (as opposed to being used in isolation, like they are in Judo).

If you have trained with me here in Japan, or at a seminar, you will know that while, I don’t advocate going to the ground, I train a lot in Newaza (Ground Fighting) to supplement my karate. 20 years ago, in my mid-20s that wasn’t the case, but working in security I found that my standup locks, holds and chokes just weren’t enough. I felt that against a competent grappler it would be like someone who can’t swim well falling off a boat into the ocean. 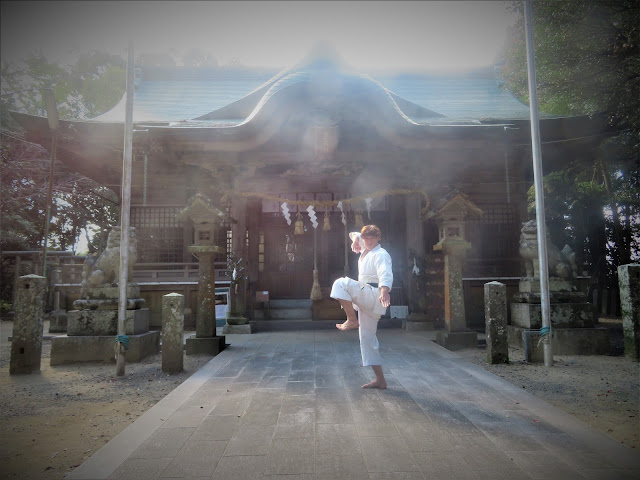 However, a decade later, in my mid-30s, I felt just as competent grappling on the ground (as I did when fighting on my feet). Finally, I knew I could ‘swim’ well! In fact, in jiyu-kumite, I sometimes enjoy taking my opponents down as most karateka are not very skillful on the ground.

Still, punching and striking, and kicking have always been my main focus… Therefore, returning to the opening statement in this article, PERCUSSIVE ATTACKS MUST BE DESTRUCTIVE, which means: (a) Effective; and (b) reliable. From now, left me define both of these: 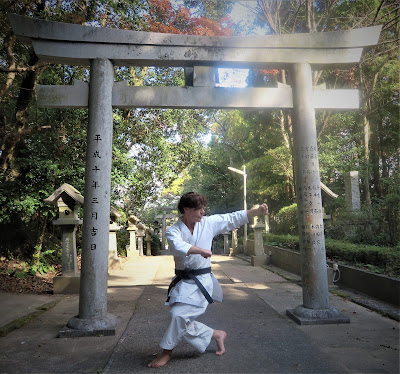 (a) EFFECTIVE: This is easy to understand… Yet, so many karateka don’t seek this enough. You have to seek effectiveness by directing adapting/evolving your training to achieve more and more explosive speed and power. Impact training must always be done—it is imperative ‘kihon’ training. In the case of strength and power, most people need to follow a strength training routine with ‘functional exercises’ like squatting, bench pressing etc… In the case of smaller built people and those with strength deficits, this must be done (if effective karate is to be achieved—please remember this, in the next point), as they will need to make up for their lack of mass or lack of fast twitch muscles. And indeed, any strength gain is also good, for those with a lot of mass: as this can only help them to use it better!
(b) RELIABLE: This is what I emphasize, as a coach, that is the really hard part… Why? Because it requires discipline. This is due to the need for lots of repetitions, and more specifically “…the constant repetition of effective techniques”. Many people have this one wrong! Really wrong!! Just to be able to do something really well ‘sometimes’, ‘half the time’ or even ‘three quarters of the time’ isn’t enough. Sorry, this doesn’t produce reliability. Reliability, is when you do something ‘really well’ 95—100% of the time.

But this too is not enough… We have to also be able to do this in a ‘freestyle context’. This is a key to Asai Sensei’s karate and, accordingly, the karate way I follow. Obviously, full contact sparring is not possible for everyone; however, freestyle effectiveness with attacks can still be achieved via adequate impact training. You need to regularly be hitting things with your best techniques and will full power, furthermore, the target (or targets) need to  be non-compliant in movement.

These points are on my high agenda as an instructor and, indeed, in my self-training. Now many instructors demonstrate nice techniques, but these are meaningless unless they can be reproduced at nearly 100% under maximum physical and mental pressure. Before I end this article I would like to apologize as it fails to neglect 'getting hurt' and still being able to function reliably. To expand on this point, I will give a personal experience. I once got into a street fight with much more technically talented karateka. However, once I hit him in the face it was over. He still managed to escape the full force of my blow, nonetheless, he had clearly never been hit before. He was terrorized, and after that I elbowed him just once and it was all over. Actually, lots of fights are like this. The first hit wipes out people's 'technique' and confidence; then they are in both shock and fear. The fact is that in karate, unless you train full contact, you will not be used to being hit. More importantly, in this case, you will not know how you respond in a violent altercation on the street. Thankfully, there are highly effective methodologies that you can assimilate, which overcome this issue without engaging in full contact kumite.

I will leave it there today. Osu, André.

Posted by Andre Bertel at Thursday, November 12, 2020 No comments: 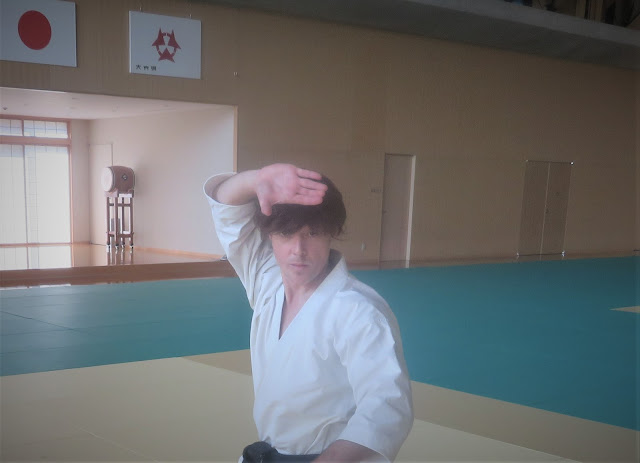 Here's some images from my training today, which was a light one (as I’ve pushed myself particularly hard this week). I only did kata and had breaks between each. Also, I only spent just over an hour and 45 minutes in the dojo. Usually my daily self-training sessions are two hours in duration.

In the fundamental sense, my technical focus was the jiku-ashi, sasae-ashi and use of the hips optimally coordinates to generate power in my techniques. In addition to this, I concentrate on ‘moving my center’ via rotation, thrust, ascension descension and diagonally. A key aspect of this by being use and move your hips like a ball, which I outlined thoroughly in the past.

Overall, it was both a fun and technical session. I personally believe that it is imperative to intermittently train with less intensity as it allows one to focus on different areas of skill development; furthermore, allows the body to stretch, rest and recover. What’s more, it can a be psychologically motivating, which results in more doing those extra sessions in the week even though one is feeling tired. 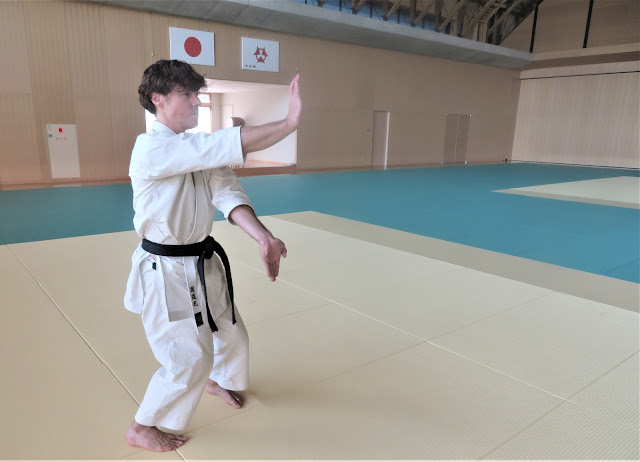 Posted by Andre Bertel at Tuesday, November 10, 2020 No comments:

TRAIN and PUSH FORWARD. YOU CAN DO IT IF YOU WANT TO!!!

My training regime was updated from the start of this month. I decided to make November very hard on myself at the end of October. My reasoning, is consistent throughout my time as a karateka. This year, in addition to my other training, I have run 500km up mountains. Yes, people who know me very well have been laughing at my insane 'additional' training. Why I've been doing that is because I needed to replace not teaching here in Japan and very occasionally around the world.

While this might sound like bragging, it isn't, it is just what I do. Bragging is folly. It is stupidity and only creates disdain for an individual. Why I am saying this IS TO MAKE A DIFFERENCE IN YOU, who is reading this. You can do much better than me if you want to. Probably much better than me.

As I have already said, I am just doing MY THING... Of course I could do more. But EVERYONE can. The point is TO DO SOMETHING, invest in your training to make yourself better: healthier, stronger, more flexible, and more efficient if someone attacks you. In addition to these points, one can increase their artistry in our beautiful art of Shotokan-Ryu, which exceeds the plastic commercialism of mainstream contemporary sports karate.

The point of this post is not to be competitive with you, THE READER, but rather insinuate that you push yourself more. BECAUSE WE ALL CAN! Of course, we must work in incremental steps to avoid injury and so forth.

My point is this, YOU CAN! As Yoda said to Luke Skywalker "Try, there is no try, do or do not". I hope this post motivates anyone who reads it. Osu and motivation from Japan. International Karate Shotokan pushes forward with this mantra, that is, to optimally boost the potential of every individual.

POWER TO YOU... TRAIN and PUSH FORWARD. YOU CAN DO IT IF YOU WANT TO!!! 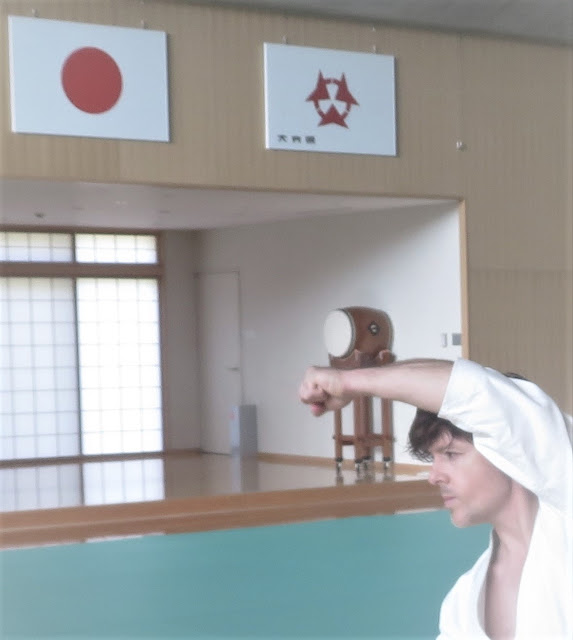 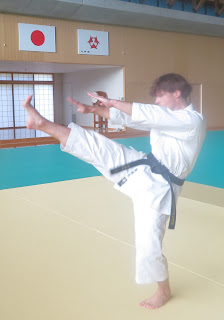 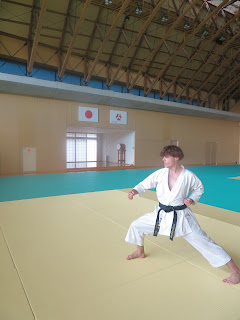 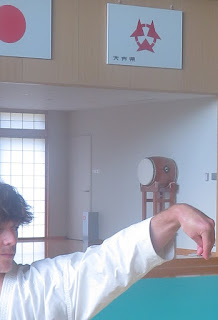 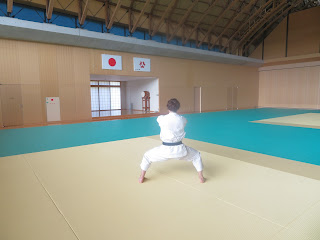 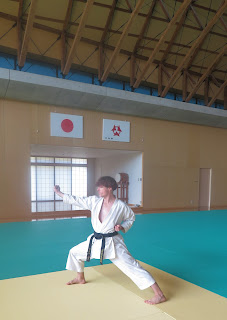 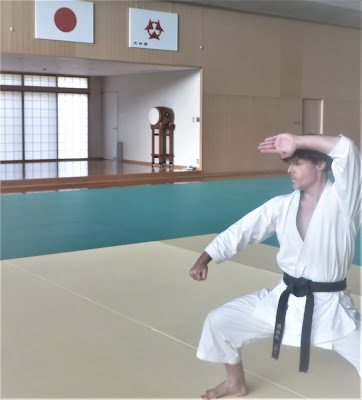 Posted by Andre Bertel at Saturday, November 07, 2020 No comments: