15th Anniversary of my Blogsite

Tomorrow (June 19th, 2022) marks 15 years since I opened this website/blog. My objective was to help my students inside and outside of Japan and to propagate ‘the Budo/Bujutsu form of Shotokan style karate’. With these points in mind, indeed, TRAINING has ruled the direction of this site and steered my life.

Back in 2007, just over a year after achieving Rokudan, I’d never believe that in the future, nearly TWO MILLION VISITORS would ever come to this blogsite.

That is because the content was always intended to be SO VERY SPECIFIC.  That is, all I have ever covered is SHOTOKAN; and more specifically, as said just above, the total focus has always been the Budo/Bujutsu form of our style, which, needless to say, is outside the domains of mainstream Shotokan. This undeniably proves that while we are the minority in karate, some are still seeking the traditional way of ichigeki-hissatsu "...as opposed to an empty and plastic version of Shotokan which is focused on 'movement performance' and 'tagging for points'.

Today, one might go back to see the original post here, on June 19th, 2007. However, on this Fifteenth Anniversary of the site, I thought I’d post links for the previous five years on this day. So here you are...

Overall, I want to thank you all for your support of my Karate journey; moreover, I hope that this site and my YouTube channel has contributed towards your karate, wherever you are here in Japan or around the world.

Lastly, I want to say that my book is nearly completed and there are also many other projects in the works.

A message from Japan

My preparation for the upcoming seminar in Bavaria, Germany, is now at an advanced stage. This seminar will be the first since late 2019, so it is going to be special. I want to make this course a Budo education seminar, not so hard physically, but very technical and useful for everyone's skill development.

I'll wrap up with some images from today's training.  Let's enjoy some great budo karate keiko and nice times. For those who will be attending, see you in Deutschland. OSU!! 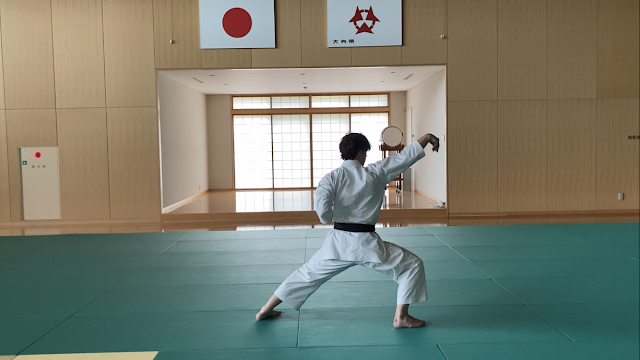 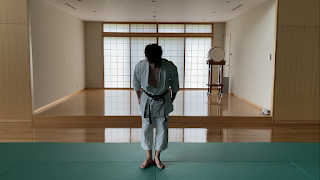 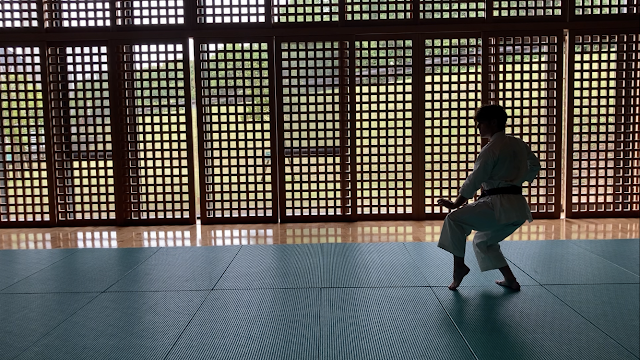 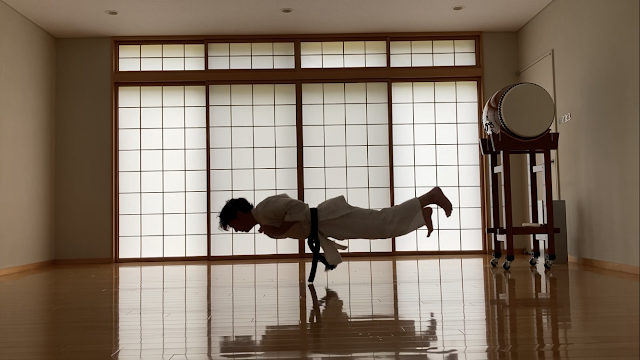 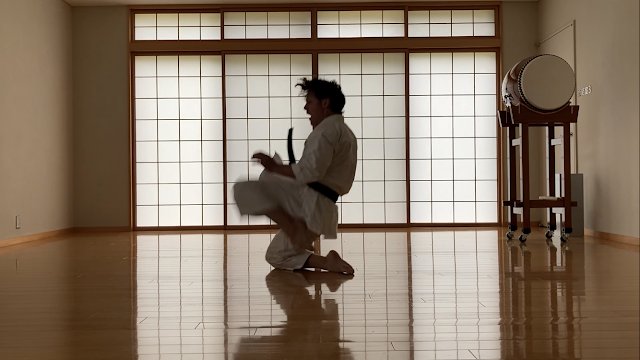 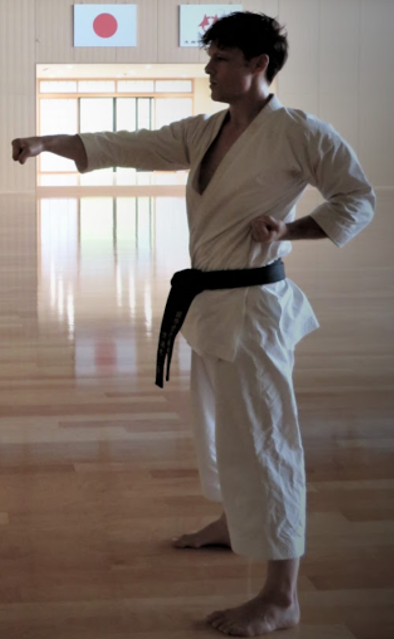 Asai Tetsuhiko Sensei would have turned 87 today. I am really thinking of the Asai family and my seniors, who closely followed Asai Sensei's karate. Just like me, there are too many technical questions unanswered; that being said, it is all of our responsibly to seek answers through training and research, thereby, follow Sensei's example.

This is the greatest legacy of Asai Karate: TO DO SHOTOKAN AS BUJUTSU; that is, to practice our style but not allow us to be trapped within it. 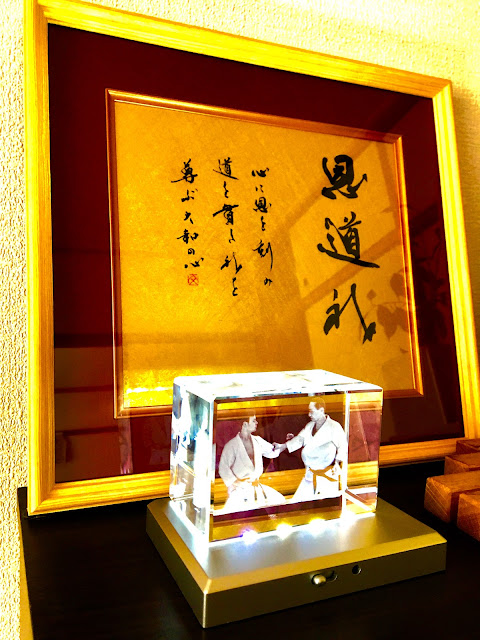 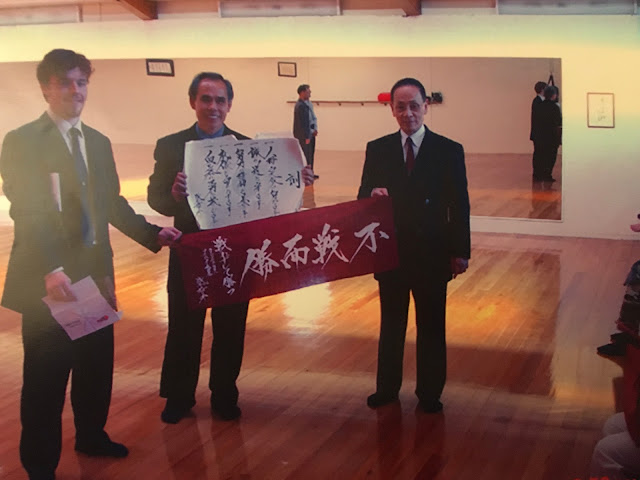 This is the same practice as the previous waza except mirrored; that is, practice migi jodan kizami zuki followed by hidari chudan gyaku zuki in migi zenkutsu dachi.

This practice is the same as techniques seven and eight, but mirrored for balanced practice. In my case, if one side is weaker than the other, I usually do more reps on the weaker side.

Techniques 11–14 are all attacking techniques advancing from and into zenkutsu-dachi. The first is sanbon ren-zuki which comprises of jodan oi-zuki followed by niren chudan-zuki (gyaku-zuki kara maete-zuki), which is a combination of propulsion/drive followed by vibration/subtle rotation. The second is two consecutive mae geri, the initial attacking chudan, with the second waza going high. The third, technique 13, is ‘legs followed by hands: Mawashi-geri then chudan gyaku-zuki. Technique 14 is Chudan ushiro-geri kekomi in isolation.

These two renwaza are in zenkutsu-dachi. The first is chudan uchi-uke followed by chudan uchi-uke kara chudan gyaku-zuki; the second is the same but the ukewaza is gedan-barai. Needless to say, both of these uke are ‘compression inward then expansion outward’ waza. The classical aim of the chudan zuki is not to merely target the opponents abdomen, but to target their spine.

The final waza of my current idokihon training and total kihon regime is simply transitioning from kokutsu-dachi to zenkutsu-dachi in correspondence with shuto chudan-uke and chudan tate shihon nukite. The key here is kakato chushin and driving forwards for the nukite.

i. Random 平安 (Heian). Today was Heian Sandan. This is simply fundamental training at present. Very shallow ‘precision’ and ‘athleticism’ based practice.

ii. Random 鉄騎 (Tekki). I deviated in today’s training and worked on both Nidan and Sandan focusing on overlapping applicative points for infighting.

iii. One kata from Shotokan’s ‘Big Seven’: for example, today was 半月 (Hangetsu) as some of students are preparing it for an examination, and this spurred me to do it.

iv. 浪手 (Roshu) . This kata is a jutsu for perfecting wave like actions in defense and offense. When practiced properly it mimics the rise and fall of waves, swirling, ebbing and flowing movement, which is not the wave itself but, rather, energy. This is one of the many kata I learned privately, one on one, from Asai Tetsuhiko Sensei. Appropriately, I state this today as it would have marked his 87th Birthday.

v. 安三 (Ansan) is a Tomari-Te kata, which we have a very unique version of. Ansan is particularly focused on Atemi/Kyusho jutsu.

I’m presently focused on shadow boxing. That might sound strange but my focus is on footwork (this coincidentally coincides with Hangetsu), head movement, and intercepting ‘the shoot’; that is, neutralizing ‘being taken down’.  In addition to these points, I am also working on the aforementioned applications from Tekki, Ansan, and the use of energy from Roshu. 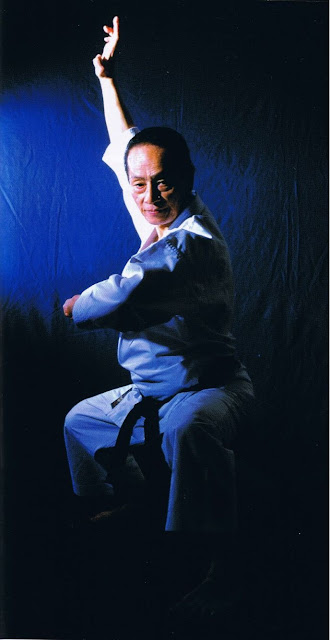 Sen no sen (Tai no sen) and Sen sen no sen 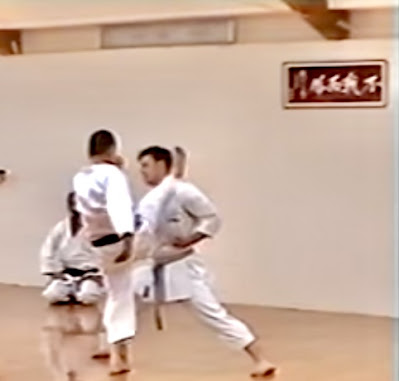 Today, I will concisely define SEN NO SEN (TAI NO SEN) and SEN SEN NO SEN as taught and practiced in traditional/budo style Shotokan-Ryu.

Predict the opponents movements/mind and make a decisive attack, which impacts faster than their waza.

In this regard Sen no sen is the strategy and, for example, 出合 (Deai) is a noun of this. It depicts the moment of meeting. I.e. - In kumite as my opponent launches their attack, I often impact as they launch; that is, I catch them within the initiation of their attack.

In Japanese this is explained as basically "...controlling the opponents chance". So when the opponent is utilizing Sen no sen, you defeat them in their process, catching them with a kimewaza whilst they attack. Indeed, this can also be 出合い; however, on a secondary level.

Again, I must emphasize that these budo strategies are different from sports karate as they are based on pure bujutsu; that is, they are not to merely to 'snatch a point' but are fully concerted on achieving ichigekki hissatsu. Much of this is to do with MAAI, which requires that "...the impact will result in maximum damage". Therefore, in the basic equation of these two strategies, we see the optimization of speed; full use of mass; and the capitalization of 'collision': via the opponents offensive action(s).

This is literally 'infighting' which conforms with the distance in a real fight and self-defense in general.

In sum, I hope that this brief article has sufficiently summarized both Sen no sen (Tai no sen) and Sen sen no sen. 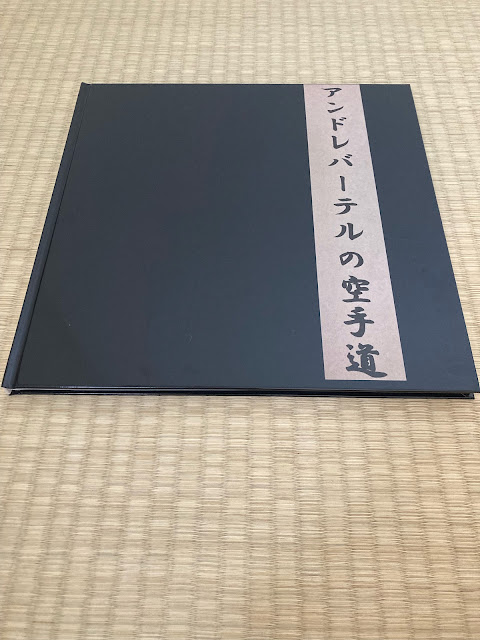 Commemorating the 15th Anniversary of this blog later this month, and in my 40th year as a karateka, we produced a PHOTO BOOK. This is not one of my books to be published in the near future but, rather, it was a personal project for my family and me to physically retain the memories of training over the last 15 years. The majority of these years (that is, with the exception of three), were here in Japan.

In sum, it reflects training and practice every day, learning from seniors, and passing on knowledge.

With these points in mind I want to offer a deep bow to all of my seniors, peers and students here in Japan, and around the world. Thank you all so very much. Also I want to thank my family for their loving and unconditional support. They are indeed the unsung hero's behind everyone who commits their lives to mastering and teaching Karate-Do.

Here a just few pages from the book. Osu and greetings from Oita. 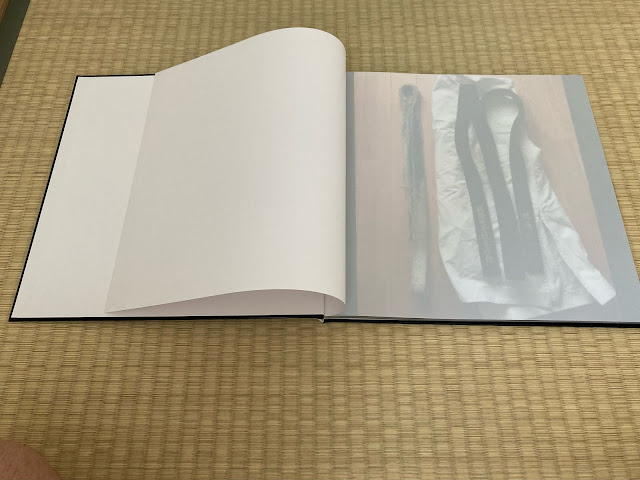 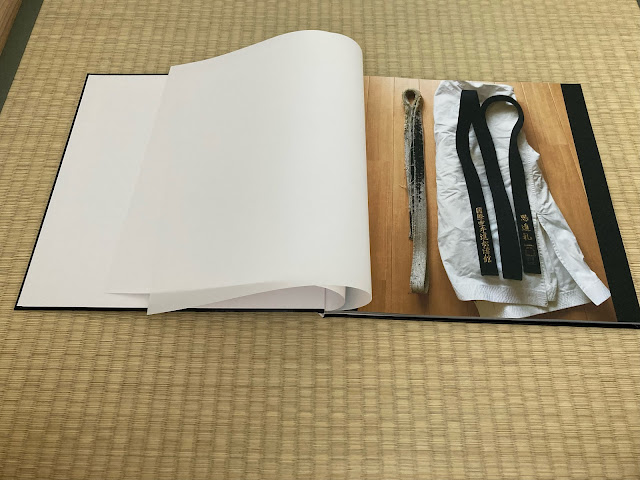 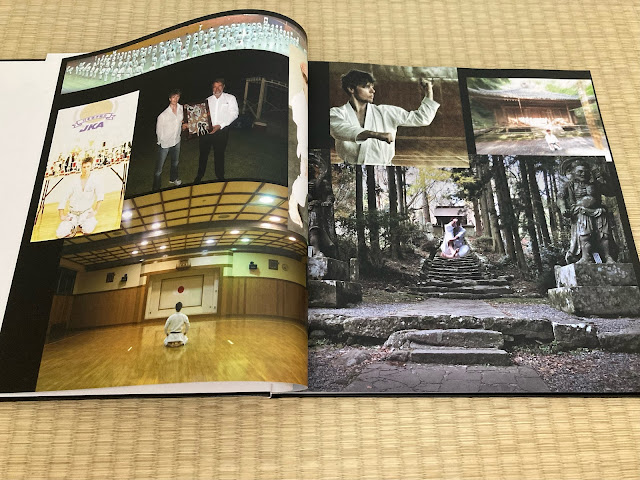 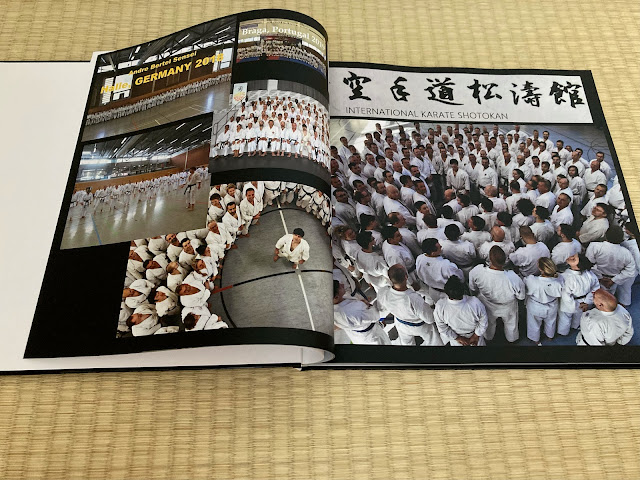 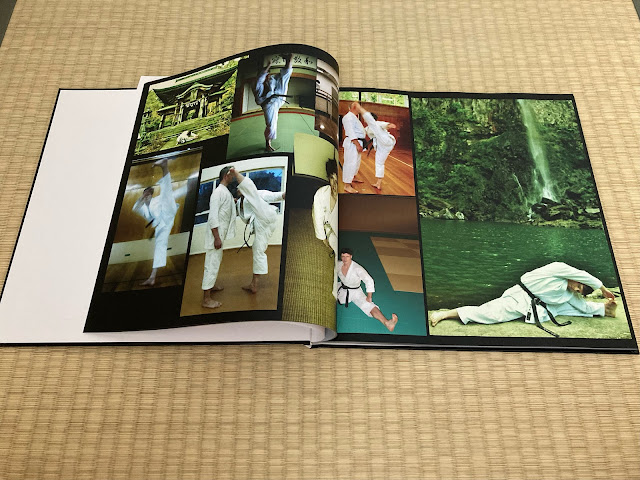 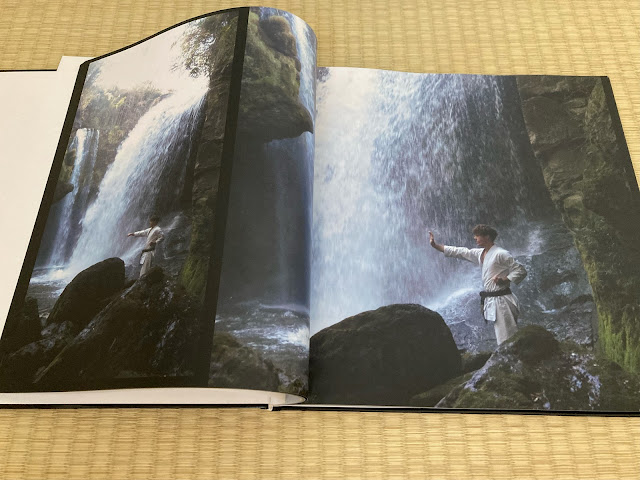 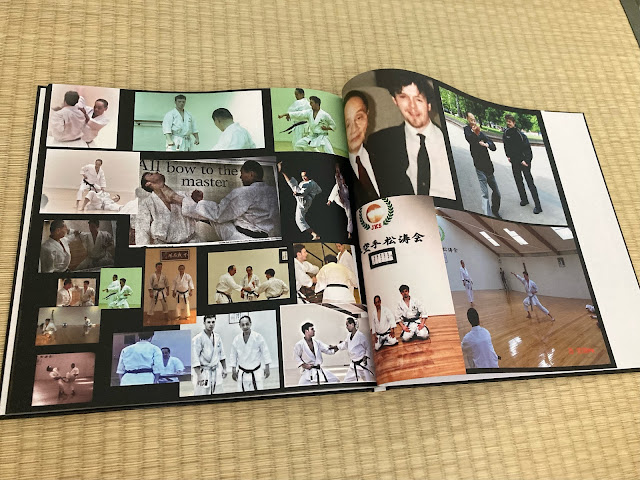 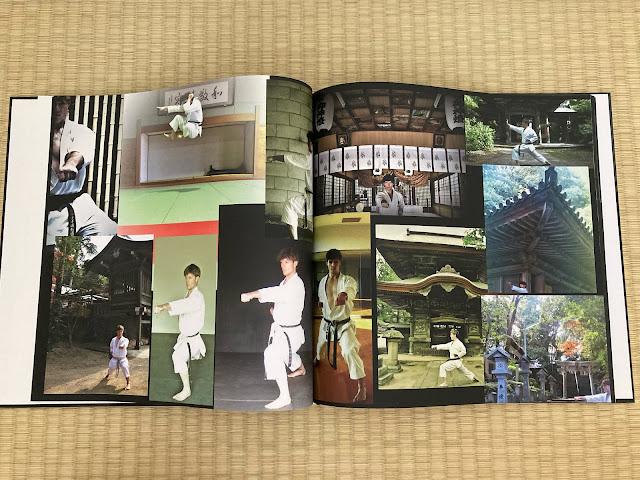 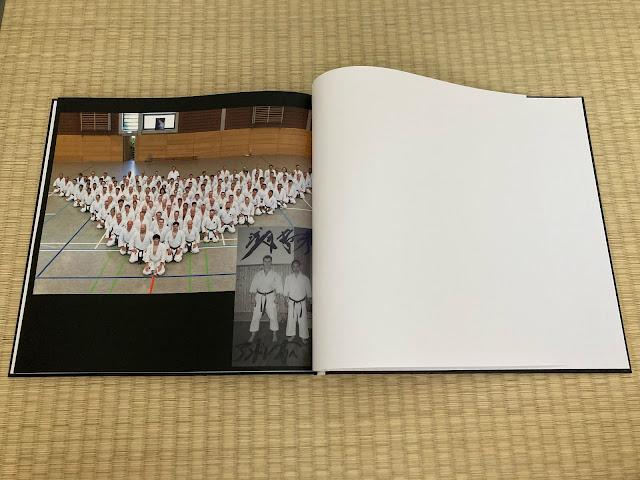 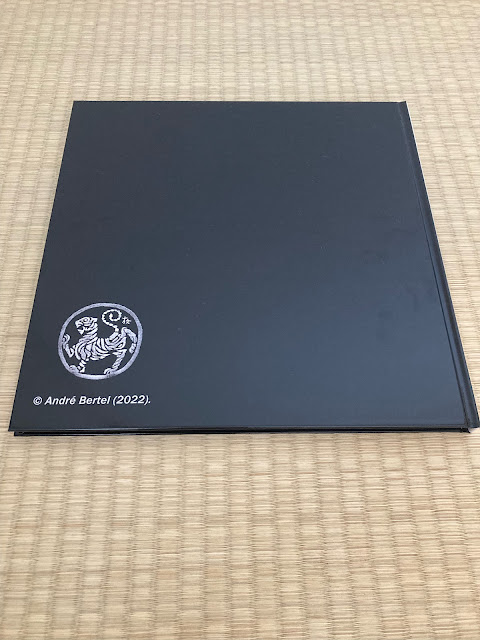 Today, when training kata, there was an elderly gentleman watching me whilst doing walking laps. He later politely asked if he could help me refine my お辞儀 (ojigi); namely, my 立礼 (ritsurei/standing bow) before and after kata. 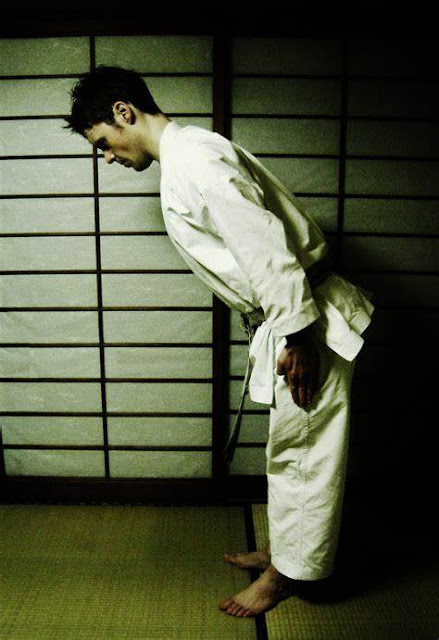 Anyway, I gladly accepted his offer as I’m always pleased to learn new skills or refine existing ones. Besides this, and the despite the advanced age of the man, he also appeared very fit, physically strong, and emitted strong self confidence.

As it turned out, later I learned that the gentleman has spent his life in Japan’s FDMA (Fire and Disaster Management Agency).

Kindly, he had no objective to undermine my bow, however, he said ‘it can be made perfect’. To briefly summarize, to achieve this, he emphasized that I should bow around one centimeter less deep. Furthermore, that I should focus on the bending at the waist and not breaking of the head and neck posture.

Now, if you know my ojigi and my shisei (posture), you will know that my alignment is very good. That being said, he stated in Japanese that: “…it could be even better”. In particular, “by maintaining an extremely strict head and neck posture” in conjunction with aforementioned advice (about one centimeter less deep in the bow). In fact, the adjustment made was basically imperceptible, however, it made a difference, which I could immediately feel.

Taken as a whole, it was a great opportunity for me to refine my ritsurei and, accordingly, I’m very thankful to this gentleman. Isn’t it great that something ‘as seemingly simple as a bow’ can still be further refined. 押忍!