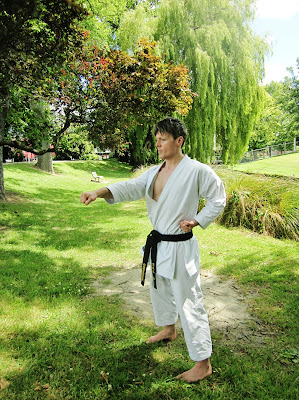 I hope this post finds you well as 2012 rapidly comes to a conclusion. It has been a very busy year on all fronts for me: with my Asai-ha Shotokan-ryu Karate seminars in Palmerston North (in the North Island of New Zealand), here in Christchurch (the South Island of New Zealand), Freemantle and Margaret River in Western Australia, Italy, Germany and in England. Not to mention hosting Keigo Abe Shihan (9th Dan) here in the Garden City. Furthermore, an intense year of daily self-training, instructors classes and practice at the Christchurch Shotokan Karate Club (click here: www.christchurchshotokan.blogspot.com) - the Mecca of Shotokan Karate-Do in Canterbury. I have also been very busy with my study at the University of Canterbury, which has again resulted in high grades that undeniably reflect the self-discipline and hardship of daily Karate-Do training. What a year 2012 has been! On that note, here is my latest training schedule which I will follow for at least the next two weeks. Kindest regards to you all over the holiday season. Keep up the training! Osu, Andre.


* Repetitions at full-pace after warm-up (10 times in slow motion): Tewaza - 60x each side; Keriwaza 30 times each leg.


* Repetitions: Ten times for each technique (slowly) then 10-30 times with maximum speed.


* Repetitions: Monday to Friday three different kata are practiced every day (four times each - facing North, South, East & West). The first practice is in slow motion and the other three are with full-speed. Light stretching is performed between each kata allowing for `fresh performances’.
Saturday & Sunday are jiyu-gata: One or more kata are practiced depending on my focus or feeling that day; nevertheless, I follow a similar pattern of repetitions to my weekday self-practices.

* Repetitions: (1 &2) For all uchikomi-waza practice at least 10 repetitions with full speed from both the left and right jiyu-dachi. (3) Rounds of jiyu-kumite are variable but the emphasis is on relaxation and extreme explosiveness once maai is gained. And (4), this impact training is focused on maximum explosiveness with the aim to develop penetration power; therefore, only ten repetitions at maximum speed and power are performed on both the left and right sides for five linear punches: namely, jodan gyaku-zuki, chudan gyaku-zuki, jodan oi-zuki, chudan oi-zuki, and jodan kizami-zuki. This is quality training of 100 punches in total; overall, your strongest punch 100 times. 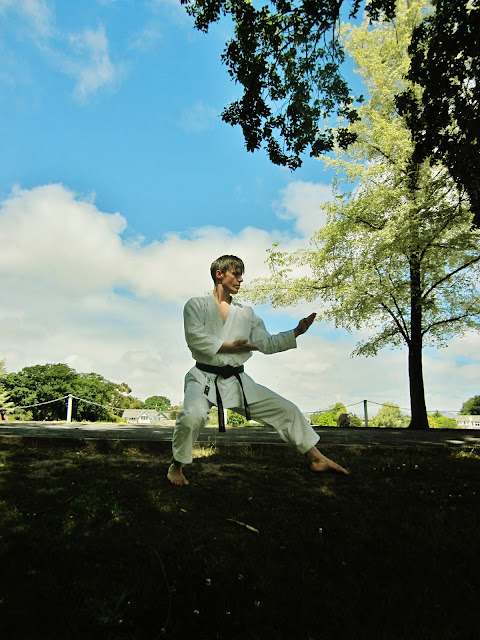 Here’s another report on my seminars in the United Kingdom: this time by the course organiser, Michael Barr Sensei (IJKA 4th Dan).
Michael not only organised the England course and trained throughout it, but he also completed a number of private lessons, and did one-on-one Asai style Shotokan training with me (on a daily basis). Click here to read the article on the IJKA Blackpool and Wyre website/blog: http://wyrekarateijka.blogspot.co.nz/2012/12/sensei-andre-bertels-england-seminar.html
Again, a big thanks to Michael and Nathalie for taking such great care of Mizuho and me whilst in the UK. Also, a special thanks to their family, especially Nathalie’s daughter and her partner Benji, who kindly hosted us at their home in London.
For those who haven’t seen the seminar videos from Enlgand, you can find them on my youtube channel by clicking here: http://www.youtube.com/user/andrebertel/videos?view=0
© André Bertel. Christchurch, New Zealand (2012).
Posted by Andre Bertel at Thursday, December 20, 2012 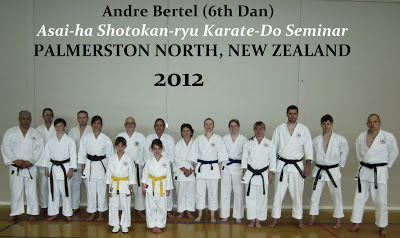 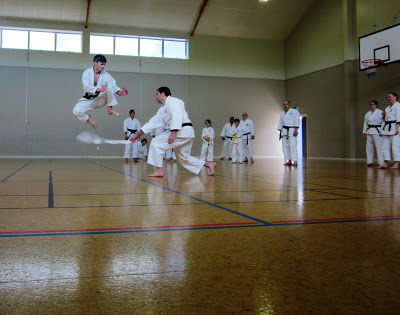 Here is a video and some photos from my karate seminar in Palmerston North (the 9th – 11th of December). It was hosted by Morgan Dilks Sensei (5th Dan USKU). This was my final seminar for 2012, which has included courses here in Christchurch, New Zealand; Ahrensburg and Hamburg, Germany; Mira (Venetia), Italy; Fremantle and Margaret River, Western Australia; Poulton (Blackpool and Wyre), England; and this seminar in the North Island of New Zealand. 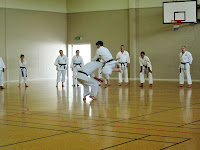 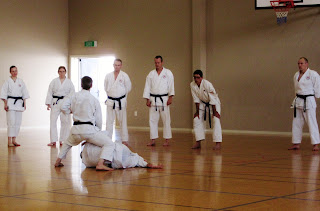 This year’s classes in Palmerston North were focused on correct maai (distancing) and three cardinal points of Asai-ha Shotokan-ryu technical form, which I always emphasise: (1) Koshi no kaiten (the rotation of the hips/waist); (2) Tai no shinhuku (the compression and expansion of the body); and (3) Junansei (softness/relaxation) to move with optimum economy. This was applied to standard Shotokan karate kihon, then to the kihon-gata—Heian Shodan; and sentei-gata—Empi. 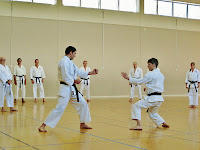 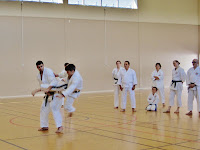 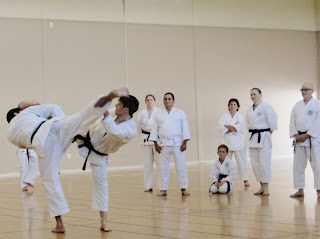 ADVANCED PRIVATE LESSONS:
In addition to the two days of group training, Morgan Sensei also had private lessons with me, where we covered three Asai-ha Shotokan-ryu koten-gata: namely, Kakuyoku-Shodan, Kakuyoku-Nidan and Kakuyoku-Sandan. We also went over several of the standard Shotokan-ryu kata, including Wankan and Chinte, followed by the Oyo (Practical Applications) that Shuseki-Shihan Tetsuhiko Asai’s taught. It is worth mentioning here that Morgan has developed a tremendous oi-zuki with immense power and snap. It was great to see, but certainly wouldn't be great to be hit by it! A fantastic budo karate-waza: pure bujutsu! 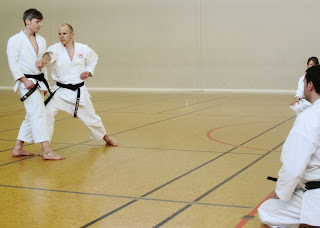 Again, Mizuho and I would like to thank Morgan, Yuko, Yuri and Mia for taking good care of us, and all the members (and families) of the Palmerston North USKU Shotokan Karate Club. By the way, please feel free to comment on the video, especially if you attended the course. Osu, André 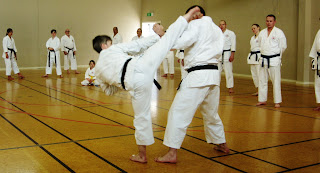 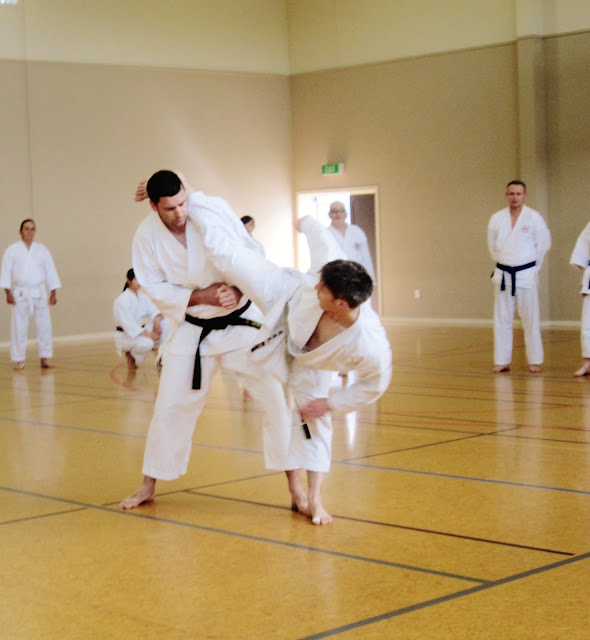 More videos from my 2012 seminars in England

Here are some more videos from my November 2012 seminars in England. Michael Barr Sensei (IJKA 4th Dan) kindly produced these. Here is a link to the IJKA Blackpool and Wyre webpage with a small article on them. A special thanks again to Michael and Kevin Berry... OSU! Click here to see the article: http://wyrekarateijka.blogspot.co.uk/2012/12/andre-bertel-basic-principles-parts-1.html and below are embedded links to both videos. 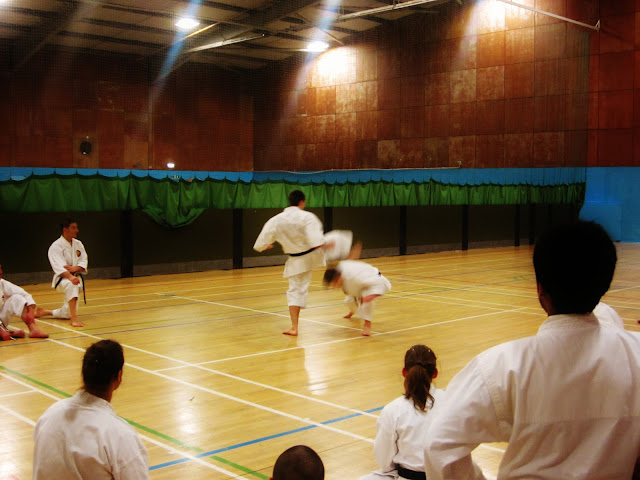 Neil Jerome Sensei (4th Dan), chief instructor of the Kenmei Shotokan Karate Club, has written a report on my seminars in United Kingdom. Earlier this year Neil also did a private lesson with me in Christchurch, New Zealand.﻿﻿


I really like Neil, who besides being a member of the KUGB (Karate Union of Great Britain) England Squad, is a super guy, so I was very pleased that he travelled to attend my course in Poulton. Moreover, Neil is an exemplary karateka who seeks to talk with his karate, and systematically studies karate as a martial art. This is Karate-Do!

Here is a link to his report. Please click here: http://www.kenmeikarate.org/bertel_seminar.html 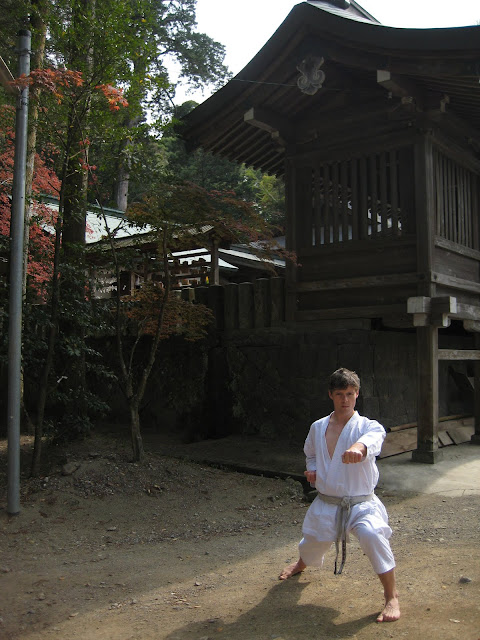 In this post I want to address three things that probably need some confirmation, based on some misunderstandings about Tetsuhiko Asai Sensei’s karate that I practice, and instruct, globally.

Firstly, an explanation of muchiken (whip fist) techniques; secondly, why in drills I often have my uke attack with oi-zuki; and thirdly, kime.


(1)    MUCHIKEN: Contrary to the views of Canadian gentleman commenting on/closely following  my international karate career, Muchiken-waza is not just a slap, although it can be with devastating results. Foremostly, muchiken is about learning to fully relax in karate techniques. By practising muchiken we not only improve circular techniques, but also our core Shotokan punches: namely, oi-zuki, gyaku-zuki and kizami-zuki. Not to mention ukewaza, keriwaza and most obviously, uchiwaza. When you see me demonstrate muchiken-waza at chudan level, it is for safe practise. This is the safest way to practise with a partner without holding back too much. Nevertheless, the Canadian chaps thoughts were totally understandable and utterly logical, which I like to see; hence, this explanation.


Interestingly, every country I have taught seminars in: Japan, USA, Australia, Italy, Germany, New Zealand, England etc..., have been shocked by the immense power that can be generated from proper muchiken.  It really has to be experienced to be believed. When I worked in the security industry, I had the chance to apply these waza... No need to say more.

(2)    OI-ZUKI: When demonstrating in seminars I often have my uke (receivers) attack with oi-zuki. Many people denounce this… They say “no one attacks with oi-zuki in a real fight”… This is funny for me as a person who worked in the security industry for many years and had numerous altercations. Maybe they think I don’t know this?


Explanation: The purpose of oi-zuki in `open seminars’ is to allow those participating to `cleanly’ see the technique I am teaching.  You have to remember the teaching context! My seminars are to improve people’s karate... Not bash up people. Of course, this is basic training. Consider military training with rubber bullets as opposed to the real thing. We move on from there with hooks, uppercuts, grappling and so forth. If we did that from the beginning, there would only be a blur.


(3)    KIME: On my recent course in England, it was said that I don’t teach or believe in kime… Well, that is wrong. I teach to eradicate `incorrect kime’ according to Asai Sensei; that is, tensing the muscles for a fraction of a moment at the end of techniques. Asai Sensei ‘s Kime is about `decisiveness’. I.e. – the target, depth of impact etc… This was his view, and therefore, the karate that I teach. I’m not claiming this is the only way; it is merely the tradition I am keeping alive. Please don’t think André Bertel thinks “it’s my way or the highway”… I am merely teaching what Sensei Asai taught me. I’m only one guy... If you like what I teach adopt it, otherwise disregard it. The reality is that my karate is for small people or those with very limited strength. If I was big and strong, perhaps I would do karate very differently...

Lastly, I would like to say that I don’t believe anyone has all the answers in karate-do, naturally, myself included. I simply keep on the straight line of practising and teaching IJKA karate (Asai-ha Shotokan-ryu) as my late teacher Tetsuhiko Asai asked me to do before he passed away. If you don’t understand this, please read his final interview in English (which he had me conduct): http://andrebertel.blogspot.co.nz/2008/12/asai-senseis-final-international.html

﻿
A small group of karateka from the Christchurch  Shotokan Karate Club trained at North New Brighton beach this morning from 6am. Practice included kihon, kata (Heian & Junro), kihon ippon kumite and some fun sumo matches. The keiko concluded with some stamina work, jiyu-kumite in the ocean, and a long period of mokuso. Osu, Andre 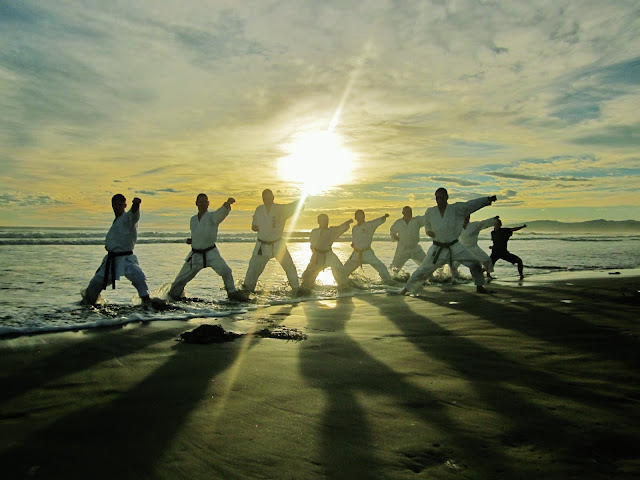 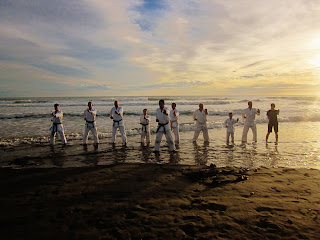 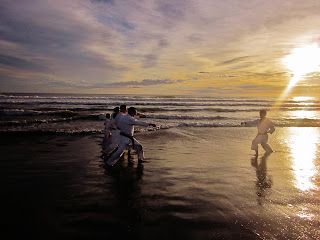 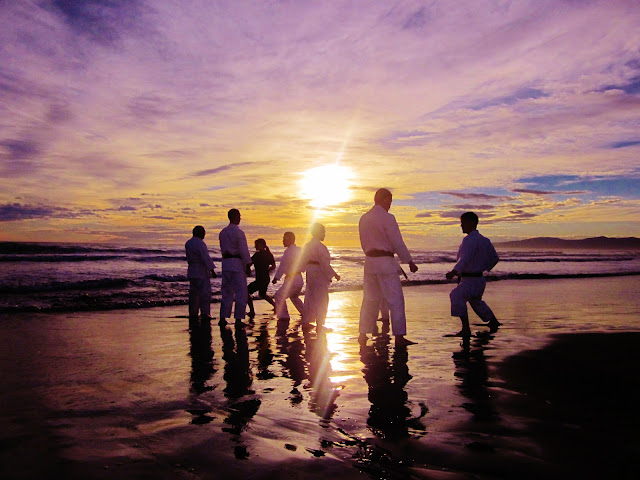 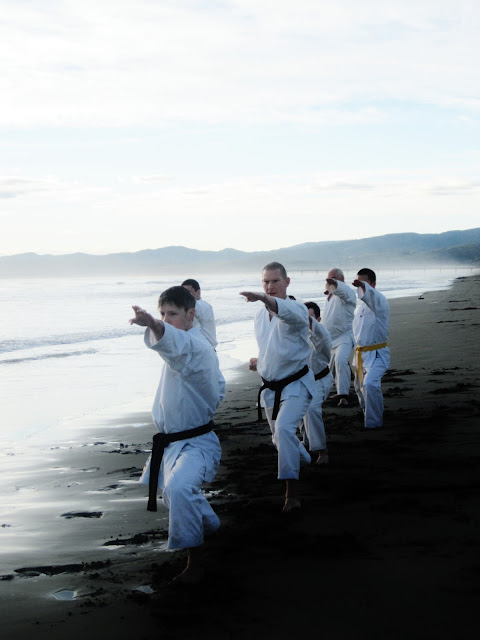 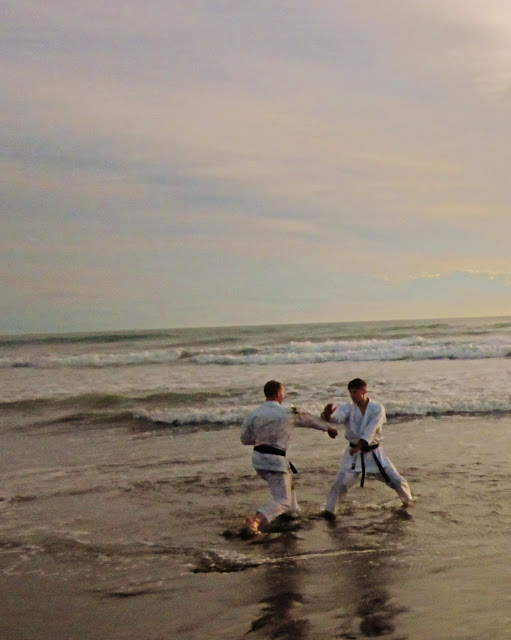 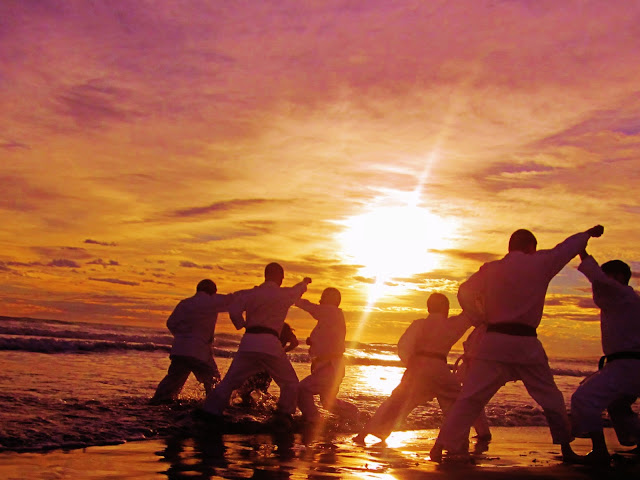 ﻿Over the weekend I taught a seminar here in Christchurch. The focus was threefold: firstly, jun-kaiten; gyaku-kaiten in kihon; secondly, the full `Asai-ryu' technical performance of Heian 1-5; Tekki 1; and thirdly, the complete oyo of these six kata.
It was great to see the karateka in attendance improve their karate over the two days, and gain a "physical understanding" of Asai Sensei's application methodology. Osu, Andre.
© André Bertel. Christchurch, New Zealand (2012).
﻿

Here is the second video from my seminars in Lancashire, England; also a link to `the correct version' of the Asai-ha Shotokan-ryu kata `SEIRYU' (as taught by my late teacher, Shuseki-Shihan Tetsuhiko Asai). Needless to say, this was the version I taught on the course. I hope these videos assist those who attended by highlighting the key points worked on: in kihon, kata, kumite and goshin-jutsu (self-defence) without giving away the lessons online.