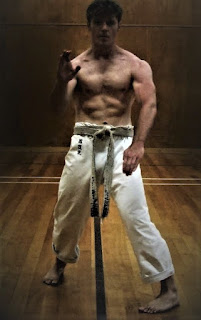 So, I thought I would address this today. Before briefly describing the three stages implemented, I need to say that there are many other forms of Jiyu Ippon. Nevertheless, stage one to three, are the standard forms as established by my seniors; in particular, my late mentor Asai Tetsuhiko Sensei. Interestingly enough, no one else seems to be following this methodology, which sadly shows that the past knowledge is being erased. This is because of the predominance of sports karate.

STAGE ONE: The first time one must formally demonstrate Jiyu Ippon Kumite is when one attempts the examination for Nikyu (2nd kyu brown belt).

The focus at this stage is that the karateka forms a kamae and natural jiyu-dachi; furthermore, that they apply the fundamentals developed in Gohon Kumite and Kihon Ippon Kumite. What matters the most is firstly: “…the seamless connection between the freestyle position, and formal/classical technique and stance—then immediate return to the freestyle position” (Ref. - T. Asai). And secondly, strong kihaku (fighting spirit), kiai in both attack and counterattack, and vigilant zanshin (Ref. - M. Tanaka, N Iida, Y. Osaka).


STAGE TWO: With the aspects of stage-one still being intensely worked on, as mentioned about counterattacks, it is now possible to diversify. However, (as in Kihon Ippon Kumite, to pass from 2nd to 1st Kyu) one must use the most effective technique (from precisely where they are) after receiving—blocking/parrying/covering—the attack. At this stage it is now possible to also use simultaneous uke and counterattack, deai-waza, and so forth.


Irrespective of the technique, spontaneity is imperative at this point with ever growing kihaku and zanshin. Stage two is the blood and bones of Jiyu Ippon Kumite training, which sets the stage for the rest of one’s future karate practice.


STAGE THREE: After achieving the Ikkyu one immediately faces the direct challenge of challenging Shodan: ‘The Beginners Step’—the first-degree black belt. This is where Jiyu Ippon Kumite truly becomes the bridge to Jiyu Kumite.


At this stage, the attack is still an oi-waza, however, it is not announced and can be anything which is effective.


To pass "...the Shodan is not only to defend, it is to attack effectively. One cannot pass if they do not try to down the opponent" (Ref. - T. Asai); hence, their choice of attack and attacking maai must be exact. Likewise, the defense and counter must be effective. In the case of attack, full contact is permitted; however, the counterattack must be perfectly controlled. A key point, in defense, is to really watch the opponent and to "not run away" (Ref. - T. Asai, M. Tanaka). One must be both decisive and courageous in this form of Jiyu Ippon Kumite. It is a real challenge!

A few other points... "The attacker may employ kenseiwaza (feints) before they attack; furthermore, if the defenders counterattack fails, the attacker is permitted to attack again" (Ref. - M. Nakayama).

Overall, this is ‘old school form of Jiyu Ippon Kumite’. 国際空手道松濤（International Karate Shotokan） follows this process of as it logically builds from Gohon and Kihon Ippon Kumite; then, bridges to Jiyu Kumite and Goshin Jutsu/Self-Defense. Otherwise, what is the point?  I would like to conclude by saying that the second and third forms of Jiyu Ippon Kumite are essential training—irrespective of grade and tenure in Karate. Of course, this also leads on to Oyo Kumite, but that is perhaps a topic for another day. 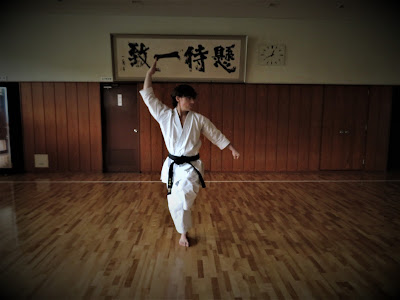 Finally back in the Dojo 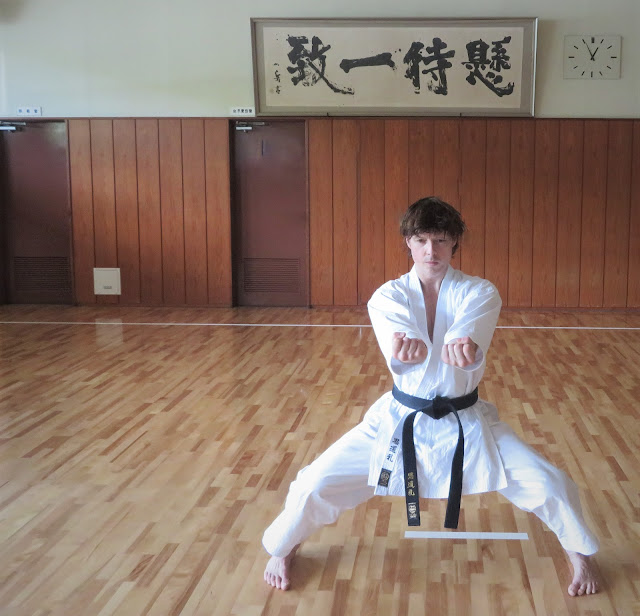 I did my first ‘OFFICIAL TRAINING’ in the dojo today, since the ‘Japan State of Emergency Declaration’. 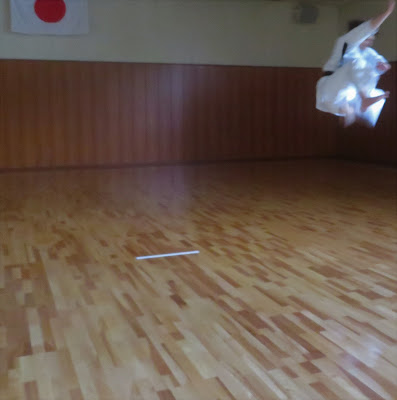 It was super to be back on the dojo floor; however, I decided to only do two hours in the dojo, and second training session was outdoors. My endurance level and strength has benefitted from the lockdown period as I spent more time working on power and endurance. 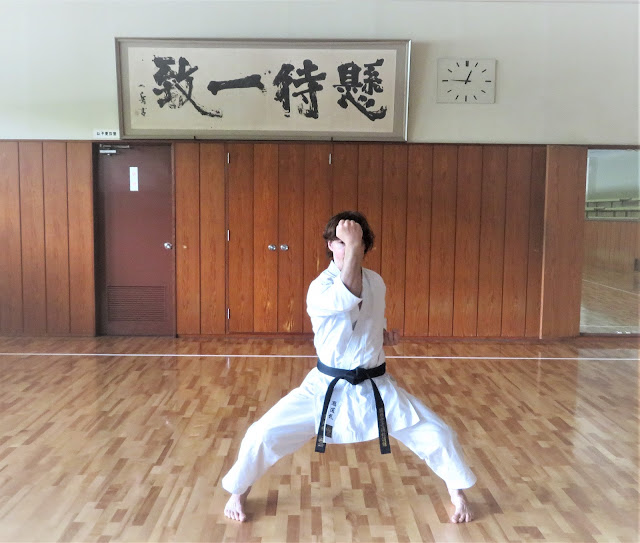 Kihon training was focused on elbow strikes and application of bodyweight combined with snap.


Needless to say, it was great to ‘officially’ be allowed back into the dojo today. I certainly have no doubt that I’ll feel it tomorrow!


Osu and positive energy from Japan. 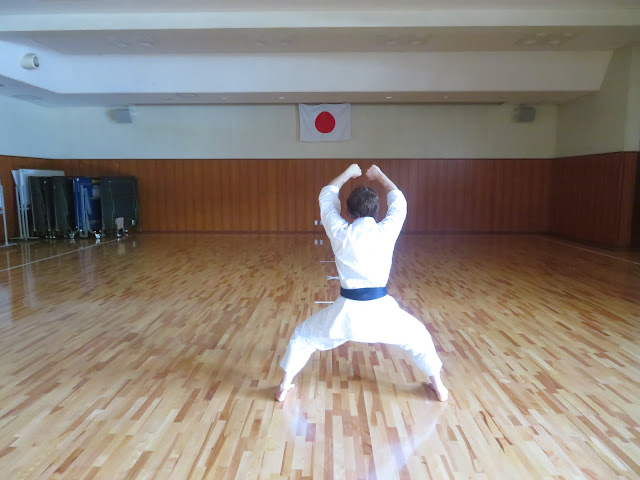 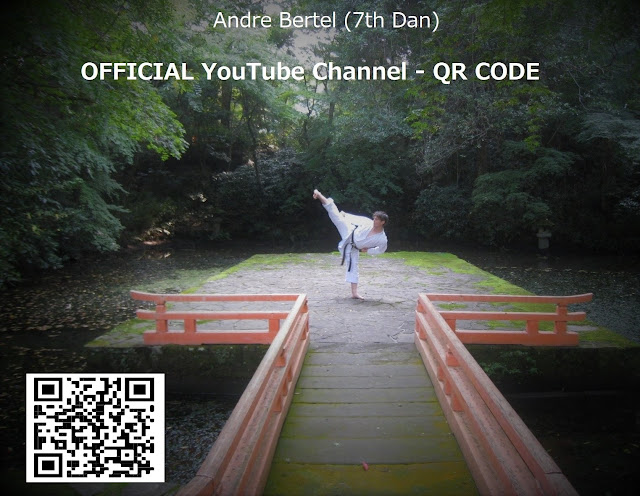 For several months I have been asked to make an official QR code for my YOUTUBE CHANNEL; so, here it is finally.


For those who have asked over the last 12 months thank you very much for your patience. Also, for others, I hope that you share the code online and by other means when possible.


Views and comments on the video featured on the channel really drives the filming and/or release of new content. I look forward to reading your comments and ideas on YouTube.


All the very best from Kyushu, Japan.
押忍
André 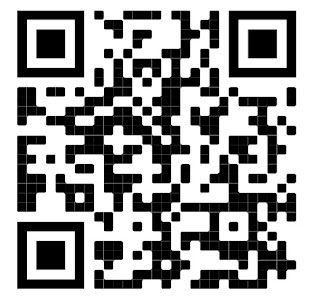 Today I enjoyed a nice outdoor self-training at 丹生神社
(Nyuu Jinja) here in Oita. The practice was standard Shotokan kihon and special calisthenics developed by Asai Tetsuhiko Sensei. This was followed by two foundational kata: 順路初段 (Junro Shodan) and 常行四勢 (Joko Yonsei); also, one of the koten-gata: 騎馬拳 (Kibaken).


It was a challenging session but, nonetheless, enjoyable. Especially given the increasingly warm weather. My next goals are in target and the road to achieve them—the next level of skill—is well under way! As the saying goes “Practice doesn’t make perfect, only perfect practice makes perfect”; accordingly, to optimalze our karate we need to "SEEK PERFECTION of real knowledge from high-quality mentors".

I wish you the absolute best health and excellent training.

Here is a new video on my YouTube Channel. It features past footage and some new stuff also.

Please check out the other videos on there if you want. You never know what you'll find. Also, there are some updates on the way! Here is a direct link to the channel: https://www.youtube.com/channel/UC9sLgH7TVz9zkLQ8okjxT4Q?view_as=subscriber 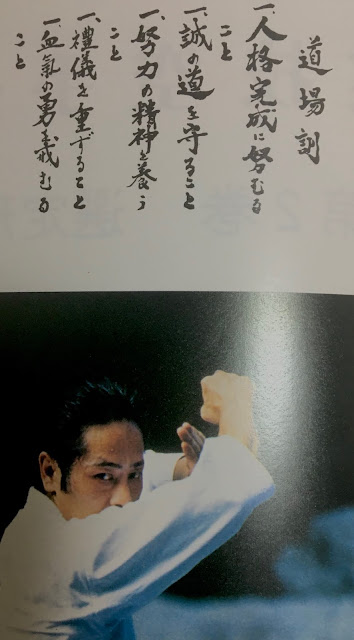 Many people ask about the DOJO KUN.

Irrespective of what one thinks about this topic, I believe that it requires fluency in Japanese (both speaking and reading) and also a deep understanding of the sociological and psychological aspects of Japan.

This is something I would like to talk about in the future. So far I have not seen sufficient explanations, as the Japanese level of foreigners attempting to do so, has been particularly poor.


The request for more sound explanations about the dojo-kun is a project that I intend to undertake at some stage. Until then, what are your thoughts on the dojo kun? Do you recite it at the end of your trainings and, if so, do you do it in Japanese or your native language? 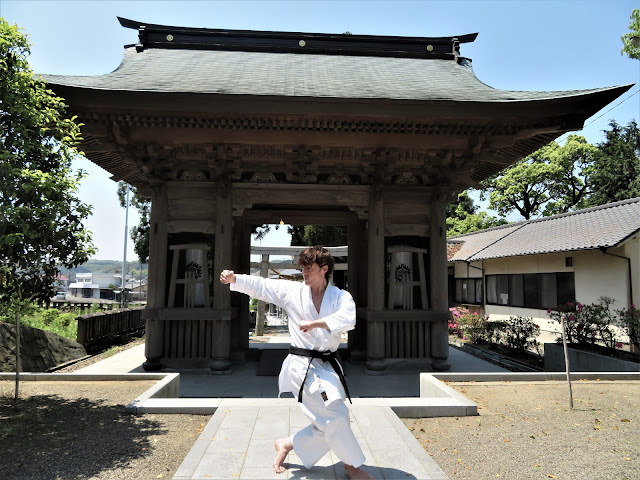 Japan’s GOLDEN WEEK has begun and unlike any other year, it will certainly be different due to the current pandemic. While the dojo is still closed, until it reopens, I am continuing my daily training; albeit, in my home and, even more so, outdoors. 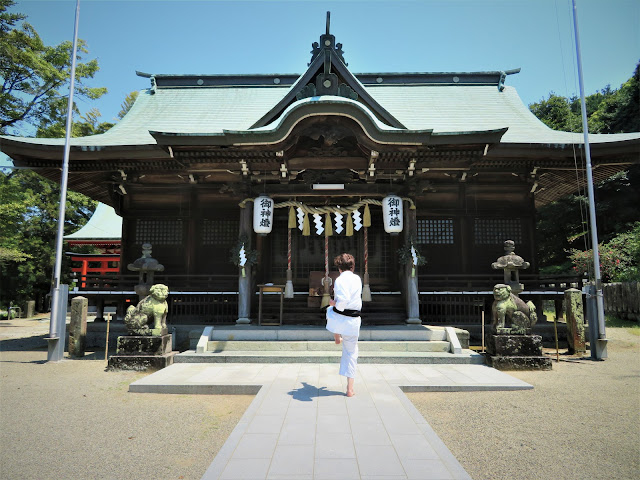 For those of you who have come to train at my dojo here in Oita City, you will know that besides daily dojo-keiko, I regularly practice at local jinja (shrines) and temples.

I’d really like to stress here that I have no personal interest in Buddhism nor in Shinto… Just to clarify, my reason for training in these places is threefold: Firstly—unless there is a festival or some other special event, very few people are about. Secondly, the traditional Japanese architecture (I am self-admitted geek about old structures and history). Thirdly, I love training in nature (and, for the most part, the temples and shrines are in places such as beautiful forests, next to rivers, and so forth).


Today I will not describe my training but, instead some photos. 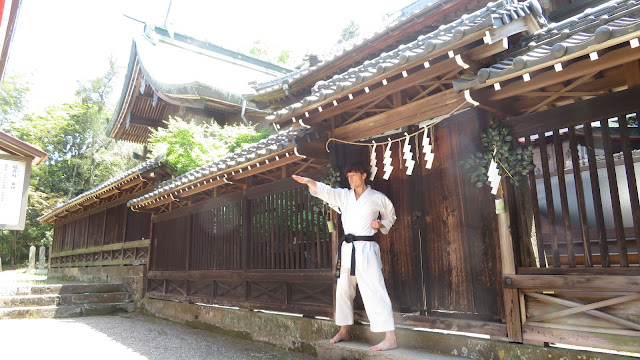 This years Golden Week can still be gold for everyone if they have an open mind and keep up their normal routines as best they can. I have found that the current situation has actually been very good for my karate training. My hope is that you and your loved ones are positive, and keeping in good health. ―André 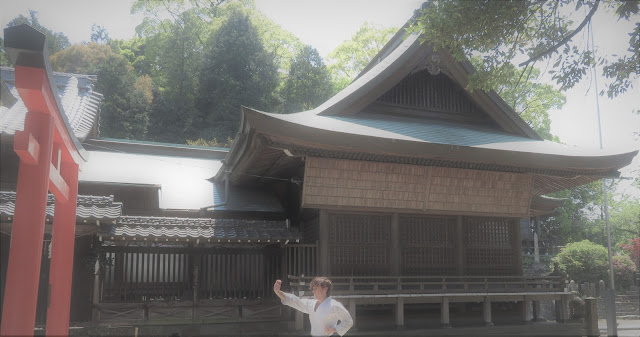