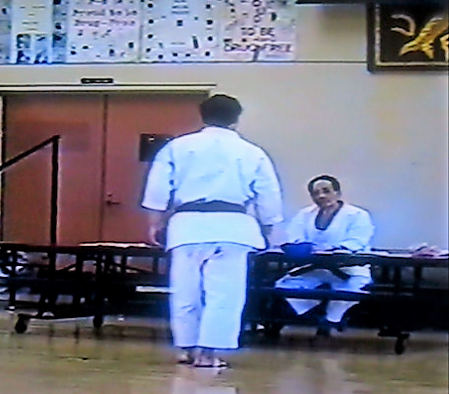 Today I thought I would write about my toughest DAN EXAMINATION… It was not the 六段 (Rokudan), but my 五段 (Godan), which was ‘by far’ the hardest.

Surprise Examination, yet again!!
There were many reasons why my Godan Examination was the hardest karate test in my life. The first reason was that—I wasn’t ready—because I didn’t expect it! Asai Tetsuhiko Sensei called me over to him (just minutes before the Dan Examination began) and, to my astonishment, said ``André kun, junbi undo!“ He then, gave me his infamous grin and gestured with a nod followed by pointing  to go outside and get ready 'ASAP'.


型  (KATA)
Finally, when Sensei called my name, I ran back into the dojo. He
then sharply questioned “Tokui-gata???”


I announced “雲手” (Unsu). After ‘a very-very brief pause’ he said “No, no, no… Sandan, Yondan—Unsu. You must do 五十四歩大 (Gojushiho Dai) again”. To put this in context, Asai Sensei had also told me to test for Godan (in the previous year) and had also banned me from using Unsu at that time. So, in the prior year—I selected Gojushiho Dai—and, of course, he hadn’t forgotten that I used it). It was one of those “Oh shit” déjà
vu moments in life. 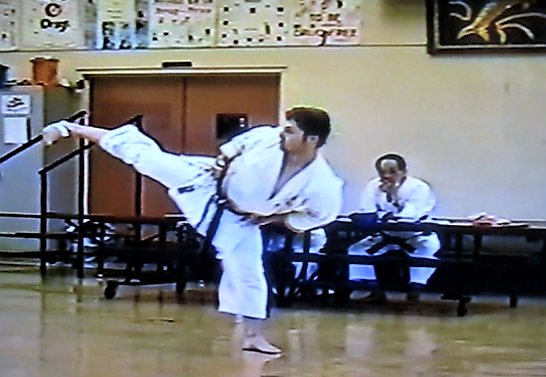 So, I had to demonstrate Gojushiho Dai again… After that, the syllabus of the time required that “…Godan examinees to demonstrate—a randomly called kata—from the 20 standard Shotokan kata (above the five Heian and Tekki Shodan)”. While in the previous year I had to perform 観空小(Kanku Sho), this time Sensei announced 明鏡 (Meikyo). However, the real shock was yet to come…

Yay, I had completed the kata portion of the exam. But actually, that wasn’t the case…

Suddenly, Asai Sensei told me to do 鶴翼初段 (Kakuyoku Shodan); next 水手 (Suishu); and lastly, 八門 (Hachimon). In sum, it was five consecutive kata for the fifth dan, kind of appropriate I guess: four of which came completely out of the blue!!! The price of being an uchideshi!!!!!!
組手  (KUMITE)

Yet another surprise then came.... Asai Sensei always gave the option to select either: (a) 自由組手 (Jiyu Kumite / Free sparring); or (b) 護身術 (Goshin jutsu / Self-defence). He then told me, “you must do both!” Needless to say, that was another first. More interestingly, in jiyu kumite, I was only allowed to defend, except when Sensei said I could attack. He also stressed that I needed to achieve ‘ippon technique’ on his demand—so the pressure was on. Consequently, I made sure that all opponents were downed and received a clear kimewaza. In the self-defence section of the exam, in addition to the classical iri-guchi-waza, I spontaneously utilized shihon-nukite, atama-uchi, kin-geri, shuto-uchi, haito-uchi, fumikomi, ushiro-keage, tsuki with nakadaka ippon-ken, and even kani-basami.
In sum, many who witnessed this exam—including Hawaii Chief Instructor Edward Fujiwara Sensei—said this was the most complex Godan examination that he had ever seen. The pass presented another surprise. At the time I physically passed the godan examination I was only 26 years old. The certified registration came just a few months after my 27th birthday. A few days after receiving my two diploma
s Asai Sensei called me and congratulated me again. He also told me that I was youngest ever to receive this rank from him and that he expected me to help preserve his karate.

To conclude, yes it was my hardest Dan Examination, but like in all things “tough means gain”. I am in deep gratitude to Asai Tetsuhiko Sensei between 1993 and 2006 for his amazing physical training, constant mentorship and overall immense support of my karate path. Lastly, I'd like to thank Matt Brew Sensei for assisting me, at this time, and providing the images from this examination.

Updated video of Seiryu Kata. This is Asai Sensei`s second kata primarily for `shoulder snap`. The video has been `brightened up` for more clarity. If you wish to see more, and see more uploads, please visit my YOUTUBE CHANNEL. The more interest will literally result in more videos.

International Karate Seminars officially decided so far, from
March to June of 2019.

Seminars for the second half of the year will be announced from late February.

To book attendance, for these events, please reference the following posters. 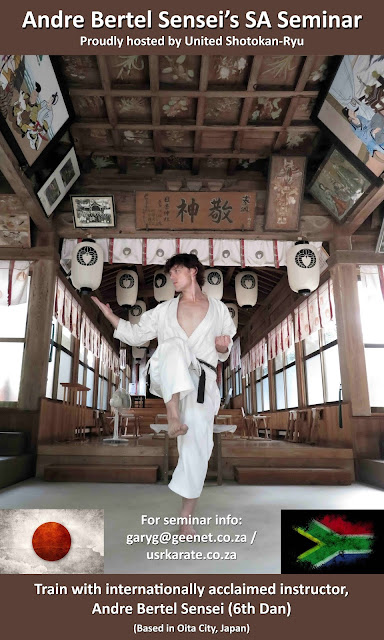 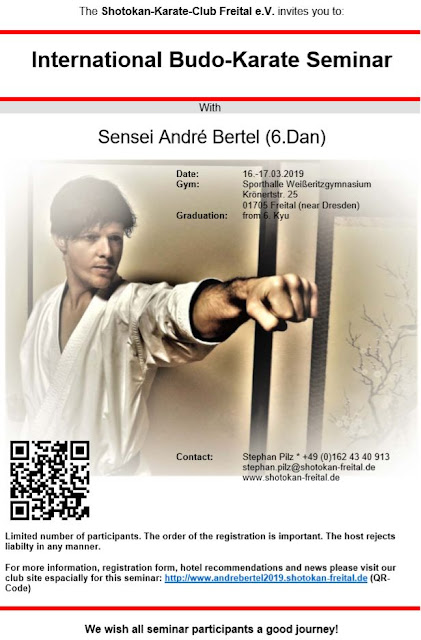 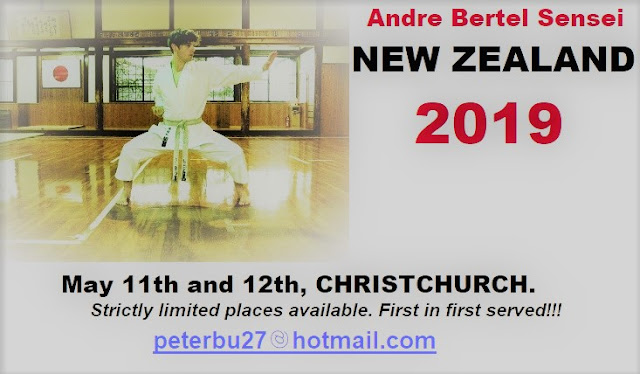 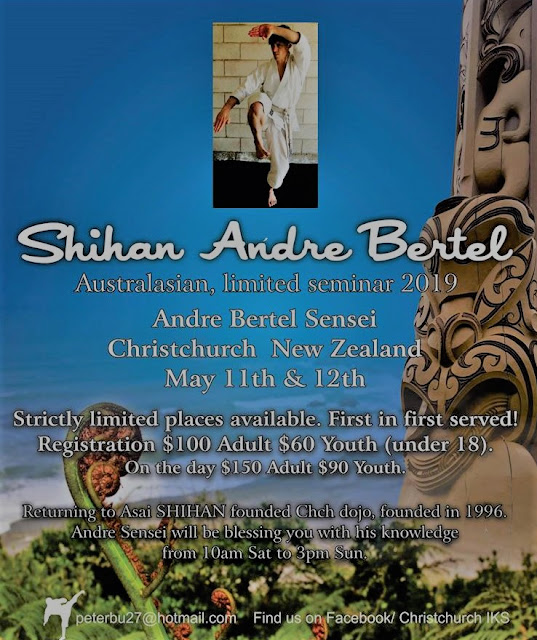 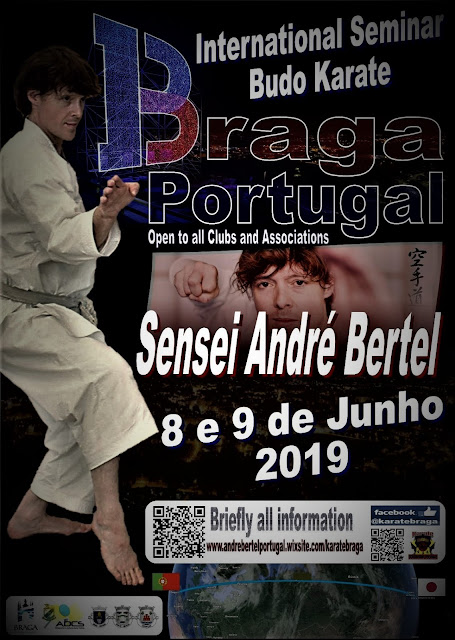 Today I completed HATSUGEIKO: my first dojo training of 2019. In fact, my last time in the dojo was on December 24th, which has been my longest break, from karate training, in over 25 years!! 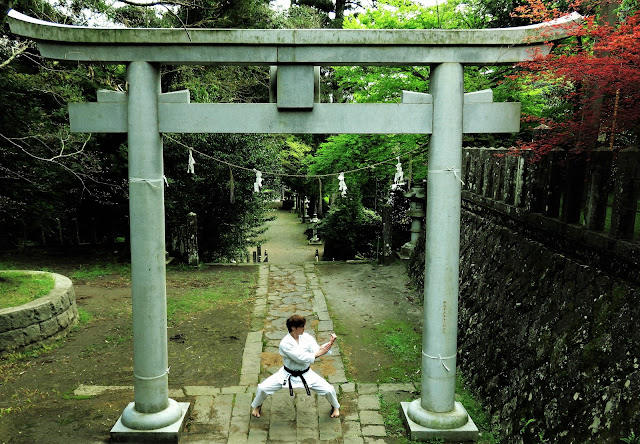 To reiterate past posts, this 13 day break occurred as I had 'non-karate related' surgery on December 25th, followed by several days in hospital. So, until today, I was only able to go very lightly through kihon and kata at home.


So what did my first dojo training of this New Year consist of? Typically, I begin the year with lots of kihon and kata; however, this year I focused on five fundamental kata. Namely:

Simple focal points to kickstart 2019: My areas of focus were to optimally use my kinetic chain for each fundamental technique in all five of these kata; kokyu (breathing); kakato chushin, especially in regards to sokuto; generic alignment - pelvic, backbone and head/neck; and harmony of the hands and feet—te-ashi onaji. Another point of focus, related to these points was the ‘oi-zuki—gyaku-zuki’ connection; in sum, the best timing for impacting as fast and damaging as possible.

With these points in mind,  逆突きの型 (Gyakuzukinokata) was the `main meal`. Like other formal exercises, I have a unique version of this kata, which comes directly from Asai Sensei. Several movements are different from all other versions and correspond directly with 平安 (Heian), 順路 (Junro) and 常行 (Joko).

Conclusion of Hatsugeiko: To conclude this year’s Hatsugeiko, and the final year of 平成 (HEISEI), I executed 百八歩 (Hyakuhachiho) several times, which allowed me to concentrate on `sinking into my seika tanden` and, in doing so, maximize the utilization of `core power`. Overall, a great start for the New Year.

Lots and lots to come in 2019. Stay tuned!!! Also, be sure to regularly check into the sites offical YouTube Channel: https://www.youtube.com/user/andrebertel
あけましておめでとうございます. 押忍！ 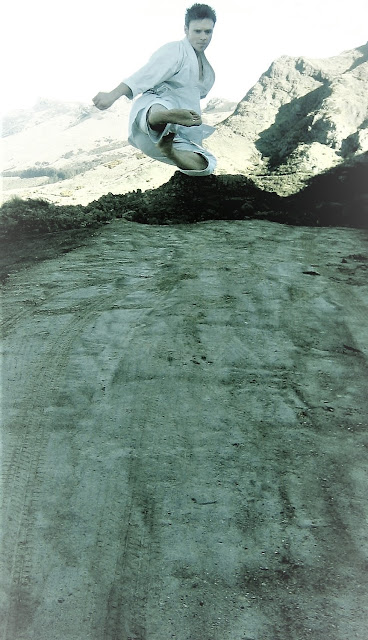