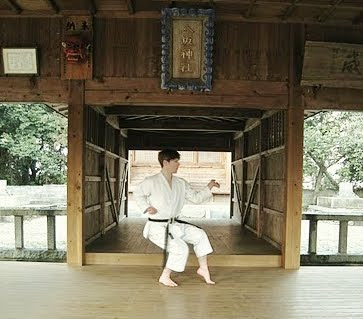 Tomorrow morning I leave to teach karate seminars for the KUA (Karate Union of Australia): http://www.kua.com.au/

I'm looking forward to training with traditional Shotokan karateka there and hopefully offering something of use for all.

It will be a long flight from New Zealand right across Australia tomorrow, so I'll have to train triple hard tonight and tomorrow morning. To those attending my technical seminars in Margaret River and Freemantle... See you soon. OSU!

Links to my karate videos 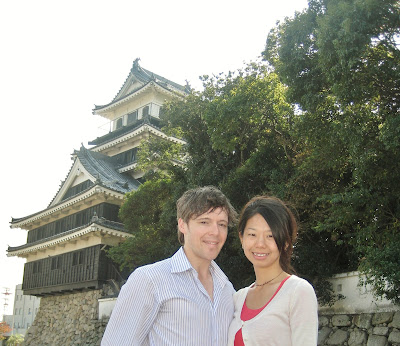 While these are not all of my karate videos on the internet they are a fair few of them. I've uploaded them as 'a single post' due to numerous requests over the last few months. Again, please feel free to post comments as they really do encourage me to post more (as they show me there's an interest).

To those who have emailed me to upload the videos today, here you are.

Please excuse the term `Sensei' - I never call myself that - but a certain lovely lady typed this out for me.

Kihon is THE BENCHMARK 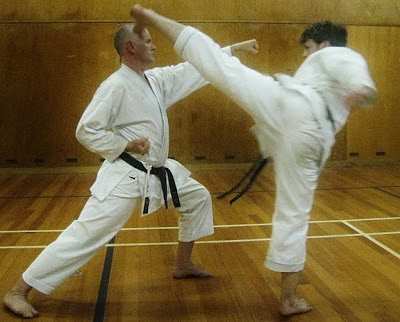 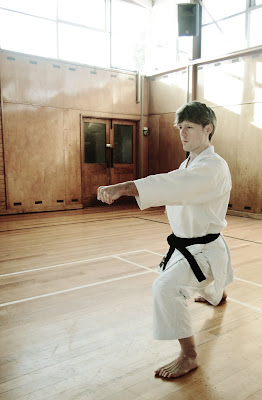 It is undeniable that what establishes the skill level of a persons karate is the level of their kihon (fundamentals). While kata is ruled by oyo, as I have discussed in past articles, the quality of ones kihon still determines "effectiveness". This is precisely why there are so many excellent instructors in Japan in comparison to the rest of the world. In the hard-core traditional karate clubs of Japan the priority is correct kihon: intensely repeated over and over again. Unsurprisingly, many karateka outside of Japan have exaggerated beliefs about about how good their karate kihon actually is. Hard training and precision training must be harmonious... Many old time Shotokan karateka in the West have trained hard for many years, yet unlike their Japanese counterparts have a low technical standard. The answer is not culturally based or because the Japanese are physiologically different... The answer is a lower quality of kihon-geiko.

My wife Mizuho has practiced classical piano since she was four years old. After 32 years of

experience she still emphasises that ‘kihon’ is what determines everything. One can play any complicated piece of music and apply the greatest feeling, but without high-level kihon they will be amateur players: in particular, to those who deeply understand the art of piano playing.

Returning to karate, and the point of ryuha: kata and kumite are also kihon. Therefore, if our kihon does not remain “Shotokan”—when applied in kumite—we are no longer doing the Shotokan system. Correspondingly, our kata must also strongly reflect the kihon of our respective ryuha or kaiha. Obviously it is still important to study shimewaza, ude-gatame, nagewaza and other waza hidden in the kata, but these are FAR SECONDARY to mastering the surface level kihon (oi-zuki, gyaku-zuki, mae-geri, yoko shuto uchi etc). I would like to see any bunkai expert in the world try to `apply their karate' on the likes of Masahiko Tanaka Sensei, Mikio Yahara Sensei, Hitoshi Kasuya Sensei et al.

To conclude, beware of Shotokan Karate instructors (with high grades and long experience) who emphasise kata applications and innovative karate drills; but NEVER DEMONSTRATE A FULL KATA in front of you (which is undeniably of a high-level). This is “the definitive sign” that they are fakes (alternatively, kata experts who cannot perform their kihon effectively in kumite). Unarguably, kihon was, is, and always will be the benchmark of people’s karate skill. 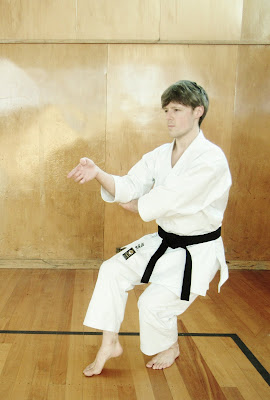 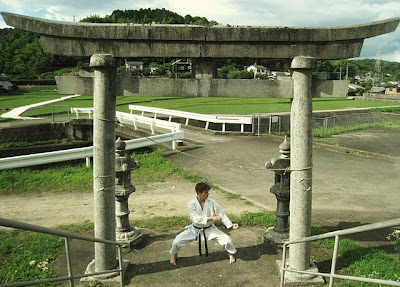 Since starting this blog a number of people have said all sorts of nasty things about me and my karate online, but I have noticed that when I respond, immediately they forget that they were highly disrespectful in the first place. My suggestion is that if people don’t like my blog or videos, they are free not to visit or view them. And if they make rude comments that attack me, there is a possibility that I just might respond. Is that 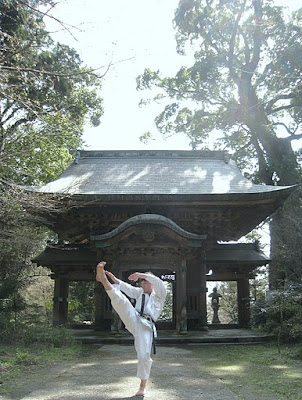 not logical?
`André Bertel’s Karate-Do’ is a blog jam packed with articles/posts (backed by numerous photos and videos)—I TALK WITH MY KARATE not only teach and write articles. It is interesting that the worse critics of this site are people who never show their own karate technique online, only talk a lot. These critics ridicule me from behind their computer screens, then claim I am arrogant when I respond. Interesting isn't it...

Any intelligent person can see that something doesn’t sit right… The people on Karate Chat Forums are the worst, and many of been waffling on them for years with literally thousands of posts! I wonder how much time do they spend in the dojo training hard? With all that time for online karate, you’d think they even have, just a moment, to upload a single kata on youtube…Even their best Heian-shodan...But no! They are clearly mouth budoka…


As said before, if people don’t like my site they are not forced to visit it, and it is their choice if they want to 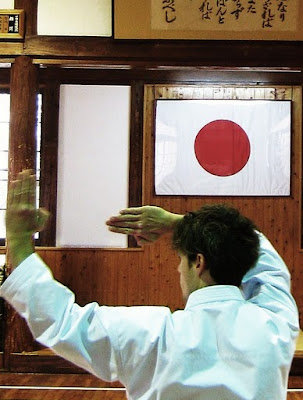 spend their time talking about me (and even posting entire forums). Such people either have no life or they live an unhappy life... Probably both, which I am not mocking here: but it is extremely sad.


Ultimately, one cannot improve their karate skill with words and text, and certainly not spending hours (and years!!!) in `internet karate chat rooms’. Karate is a physical art and those who have acquired a high-level are not afraid to demonstrate their skills: skills which clearly unveil their technical standard. 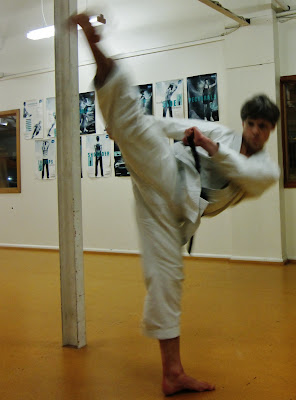 My blog turns five years old today! Yes, half a decade has passed since I started this website.
Recently the site exceeded one million visitors and received over a dozen very thoughtful emails from all over the world. DOMO ARIGATO! The common thing that people say is that they have “…enjoyed the site because everything in it is based on actual training”. Indeed, the key is to engage in daily "TRADITIONAL" JAPANESE SHOTOKAN TRAINING. Even though I'm currently back here in New Zealand—my training still precisely mimics karate from the source. This practice is simple, repetitious and intense. However, like it or not, if one wishes to be even “OK at karate” by traditional Japanese standards: THERE IS LITERALLY NO OTHER WAY! 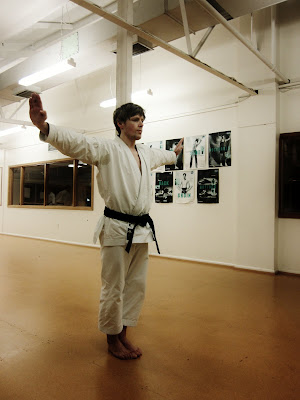 So there you have it! Five years on, my message remains the same! I will continue to follow Shotokan properly and conveying technique which is seeking the perfection that is sought in Japan. Thanks to all of the TRADITIONAL JAPANESE SHOTOKAN KARATEKA around the world that have supported this site for the last five years. There is so much more to come 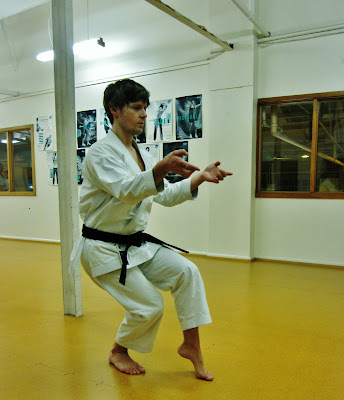 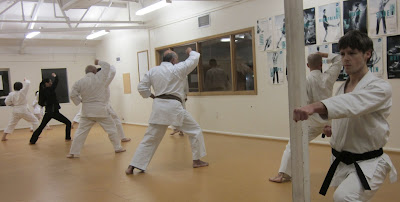 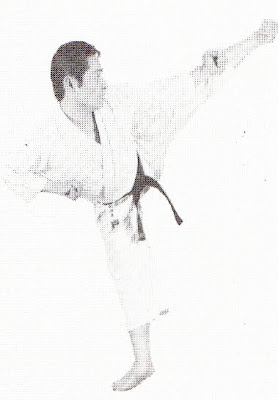 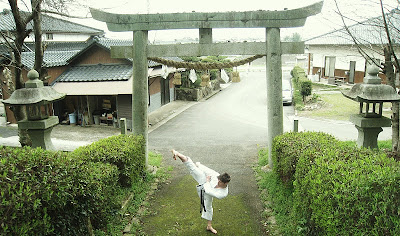 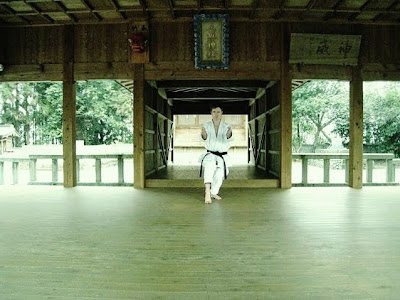 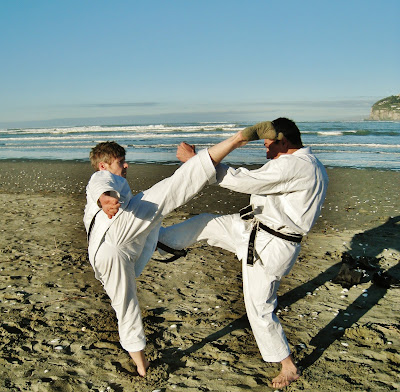 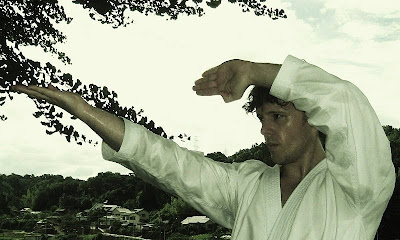 I am free for the next few weeks 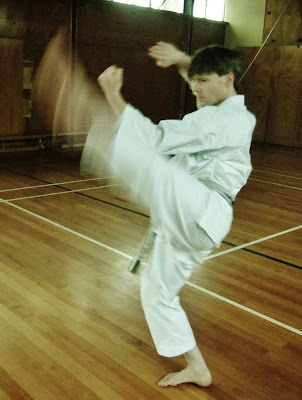 From Monday of next week (June 11th) I'll be available full-time until I take a week off to teach karate-do seminars in Western Australia.

For those wishing to train prior to then, you can email me at: andrebertelono@gmail.com Like at the start of this year, it will be a case of “first-in-first served”.
Osu, André 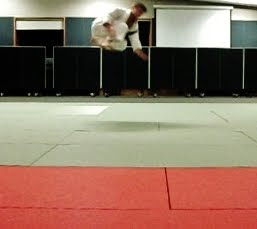 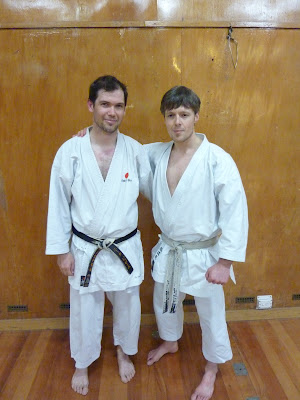 Neil Jerome Sensei (4th Dan) of the KUGB (Karate Union of Great Britain) came for a private class with me, late in May. It was a pleasure to meet him, and his girlfriend Debbie, during their vacation here in New Zealand.

Here is a report on the class (featured on his club website): http://www.kenmeikarate.org/bertel.html