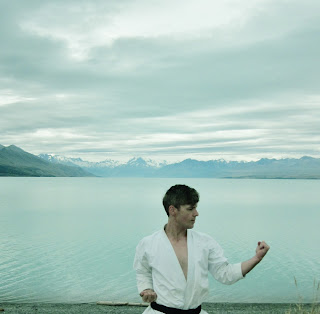 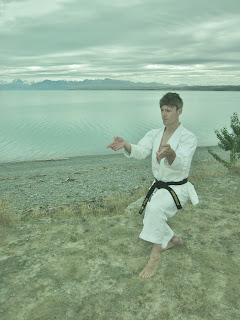 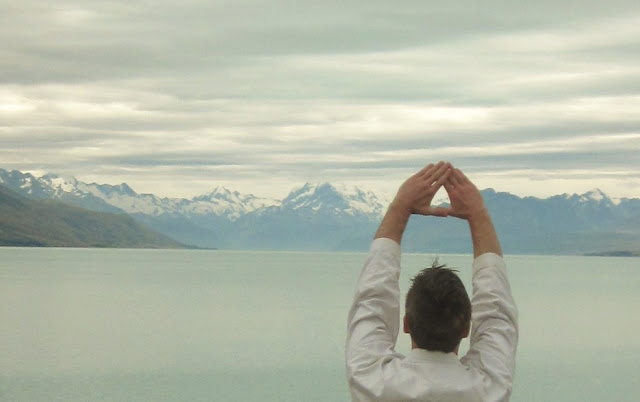 Upon my return from South Africa we travelled to Wellington (more about that later depending on outcomes) and then travelled with Matt Sensei and his family to Mt. Cook (real name - AORAKI); hence, this post. Please stand-by for more articles from my seminars in South Africa and video footage. Osu, Andre.

Posted by Andre Bertel at Tuesday, February 19, 2013 No comments:

Gary Grapentin Sensei (chief instructor of East Cape Shotokan-ryu and seminar organiser) arranged a training on Kariega Beach, which I thoroughly enjoyed instructing... As I went overtime with my lesson, I checked if the participants were keen to continue in the darkness, they answered with a determined "osu": so we continued.
The session was for advanced karateka so we used the time to practice kihon, kumite and Seiryu kata: primarily revising what I taught during the weekend seminars.
In particular, emphasis was placed on the difference between bunkai (merely to learn the kata sequence properly - literally `analysis'), which we utilised in this class; and oyo (application: the actual combative applications/self-defence principles of the kata); moreover, the use of junansei (softness) to maximise impact power. All of the participants did very well, and gained a better understanding of Seiryu kata and Asai-ha Shotokan-ryu karate in general.
Here is a link to the correct performace of the kata, as taught to me by Shuseki-Shihan Tetsuhiko Asai (10th Dan): https://www.youtube.com/watch?v=uNcOeu5Fv20

NB - Whilst one cannot learn kata with any depth merely from videos, as you (those who attended my South Africa Seminars) have been taught the kata and fully understand it through first-hand instruction, the video will now be useful for your study. Please apply the principles of Seiryu kata to the standard Shotokan kata, and also kihon, kumite and self-defence. I wish you all the very best in your karate-geiko.
Osu, Andre 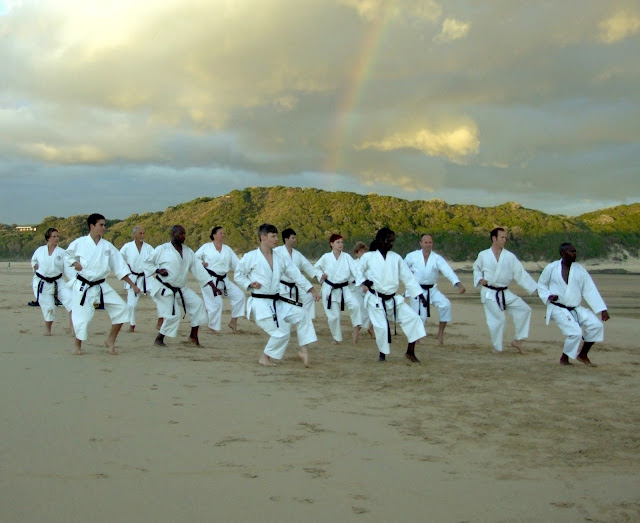 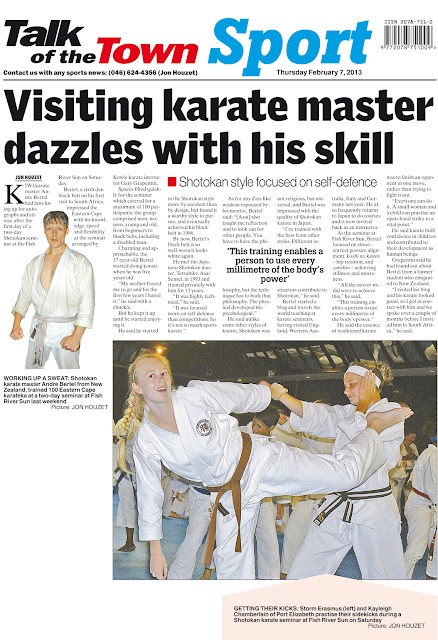 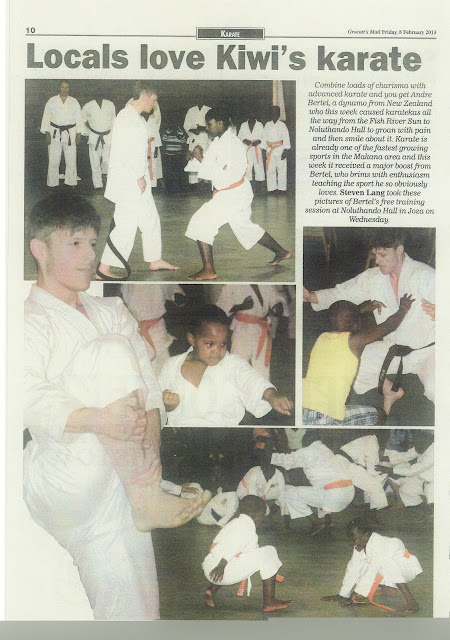 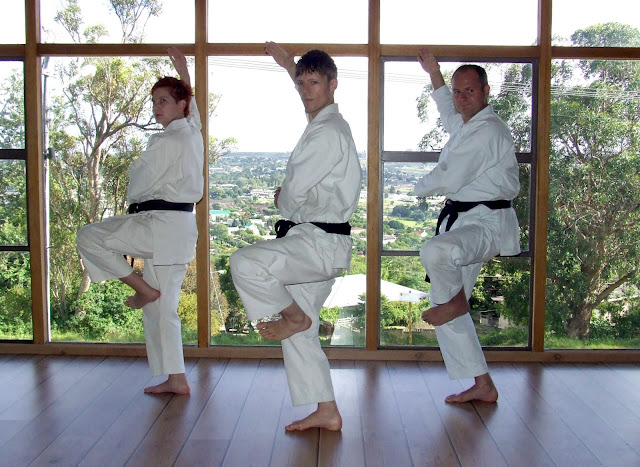 Each day, whilst in South Africa, I gave Gary Grapentin Sensei and Maureen De Jager Sensei private lessons. The private lessons for Maureen Sensei were primarily focused around Jitte kata and “Jitte kata kumite no bunkai”, but also included a general introduction of the Asai-ha version of Unsu, and revision of Seiryu. The one-on-one lessons I gave Gary Sensei also included a revision of Seiryu; however, elite traditional kihon and Meikyo-Nidan kata (the Shotokan version of Matsumura Rohai) took precedence.


All of these private sessions emphasised `hip-torso-leg coordination’ during the execution of all techniques; maintaining correct posture; relaxation to generate snap; and the interrelationship between compression and rotation. I will not give a full run-down on what we did—in detail—as that information is in Gary Sensei’s hands, as the chief instructor of East Cape Shotokan-ryu.


On the whole, it was great watching Gary and Maureen improve their karate technique and, in doing so, generate more speed and power than they previously could; moreover, equip them with new skills to filter out to the members of East Cape Shotokan-ryu. Osu, André. 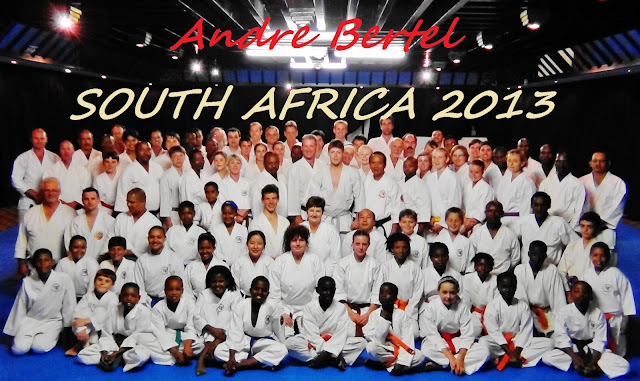 To begin, I thought the best thing to do is provide  a background on my hosts, the EAST CAPE SHOTOKAN-RYU, and its chief instructor, Gary Grapentin Sensei (5th Dan). Unequivocally, this will be very useful for those looking for quality karate lessons (see the time and location schedule below): namely, classes in Port Alfred, Grahamstown, the Kenton on Sea Karate Academy, Fort Beaufort Karate Academy, Yellowwoods Primary School Karate Club (midway between Adelaide and Fort Beaufort).


PHOTO, VIDEOS AND ARTICLES ARE ON THE WAY: However, before I offer this schedule (and the aforementioned profiles on ECSR and Gary Sensei) I'd like to emphasise that I will be filtering out a series of articles in the coming weeks covering my open seminars at the Fish River Sun; daily one-on-one technical sessions for Gary Sensei and Maureen Sensei; the training in the Joza township; special classes for the ECSR instructors/senior grades, and local media. Last, but certainly not least, video footage from these sessions will also soon be available, so stay tuned! Osu, André 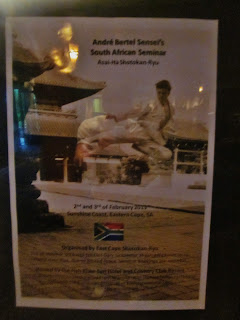 PS - To all karateka who attended my seminars in South Africa, you are invited to offer feedback. If you are willing to do this, please email me at: andrebertelono@gmail.com. Furthermore, with your permission this will be published, here on my website/blog.
ABOUT EAST CAPE SHOTOKAN-RYU:
East Cape Shotokan-Ryu (ECSR) is based in the Eastern Cape Province of South Africa and was established in 1992. ECSR currently comprises the following academies and clubs: Kowie Karate Academy (Port Alfred), Albany Karate Academy (Grahamstown), Kenton on Sea Karate Academy, Fort Beaufort Karate Academy, Yellowwoods Primary School Karate Club (midway between Adelaide and Fort Beaufort), Rhodes University Shotokan Karate Club (Grahamstown) and the Kingswood College Karate Enrichment Programme (Grahamstown). Membership includes children and teenagers as well as a large contingent of adult karateka. One of ECSR’s objectives is to strengthen and unite relations between the various communities within the Eastern Cape. This is in part realised through links to the Joza, Makana and Fingo Karate Clubs which are situated in the previously disadvantaged areas of Grahamstown.

Chief Instructor - Gary Grapentin Sensei: Gary Grapentin Sensei (5th Dan) has practiced Shotokan karate for the past 28 years and is the head instructor for East Cape Shotokan-Ryu. He also serves as a shihankai member and as the vice chairman of a national style based organisation in South Africa. At ECSR he is assisted by a number of instructors, many of whom began their karate training with him. I highly recommend Gary as a Shotokan Karate instructor and his seeking of high-level traditional technique; moreover, his fine character, which exemplifies the virtues of true Karate-Do.


ECSR special events: Apart from weekly classes, ECSR offers regular gradings at all training venues, mountain and coastal gasshuku, and training seminars conducted by senior guest instructors from various disciplines and styles of karate. ECSR is well-known for annually hosting the prestigious East Coast Karate Open Championships at the Fish River Sun Hotel and Country Club Resort. In 1999, 2008 and 2010 ECSR members enjoyed representation in the South African National All-Styles Junior Karate Team. Although participation in the karate sports arena is encouraged, emphasis is placed on traditional budo karate with the development of a positive attitude and a healthy way of life being of primary importance. Visiting karateka to the area are always most welcome to train at ECSR dojos.
Email contact (Gary Sensei):  garyg@geenet.co.za