Here's an article by my good friend Bryan Dukas Sensei (5th Dan) who travelled down for my seminars on the East Cape. Bryan Sensei besides being a truly wonderful human being, in my opinion, is one of the best traditional Shotokan technicians in the world.

You can click on the following link for his report on the seminars: http://www.dukaskarate.co.za/index.php?option=com_content&view=article&id=98:training-with-andre-bertel-sensei&catid=1:latest-news&Itemid=50
© André Bertel. Christchurch, New Zealand (2013).
Posted by Andre Bertel at Thursday, March 28, 2013 No comments: 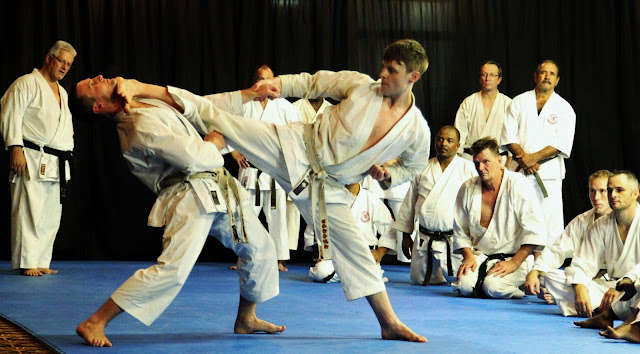 I have been a reader of André Bertel Sensei’s Blog for a number of years, and have always been immensely impressed by his articulate and well-written articles on Shotokan karate-do. From a technical perspective his articles are always highly informative and analytical. As most regular readers of André Sensei’s Blog would probably concede, he is also a unique and somewhat controversial figure in the Shotokan world. For starters, the fact that André Sensei is a westerner and a past uchi-deshi of Tetsuhiko Asai Sensei is in itself unusual. In addition, his lifelong ambition to preserve the original principles and concepts of Asai-Ha Shotokan-Ryu has earned him a certain degree of criticism in some quarters.

I first began corresponding with André Sensei after a good friend and long-time karate student suffered a major stroke in the latter part of 2011. I had previously been aware of Asai Sensei’s research into karate for the disabled and in particular wheelchair karate (kurumaisu). André Sensei showed a genuine interest in my student’s predicament, and was quick to offer his advice and assistance. Shortly thereafter, at my request and invitation, André Sensei agreed to travel to South Africa to conduct an Open Seminar. Throughout our year-long planning of the seminar, André Sensei was always extremely professional and punctual in his correspondence. He also offered valuable input and sound recommendations on how best to structure the seminar and additional dojo training.

Finally meeting André Sensei in person was a great privilege and honour for my fiancé, Maureen, and I. His friendly, unassuming and easygoing nature belies his vast depth of knowledge and ability in karate-do. Despite his rank and achievements, we found him to be an incredibly humble and patient teacher, whose passion for karate-do is boundless and highly infectious.

The flight from Christchurch, New Zealand to East London, South Africa is a lengthy one and after meeting André Sensei at the East London Airport we embarked on the last leg of his exhausting 30 hour journey - an hour’s drive to the Fish River Sun Hotel and Country Club Resort where the seminar was to take place. After dinner we took André Sensei to have a quick look at the seminar venue. We hardly expected an impromptu training session – which is exactly what we received. During the session, André Sensei demonstrated some incredibly practical and highly effective oyo-jitsu. This was to be the first of a number of impromptu training sessions during his visit. Other memorable sessions included the practice of Seiryu Kata in the car park of a Kenton on Sea seaside restaurant; and a midnight training session for Maureen and I in the lounge of our home in Grahamstown.

The SA Open Seminar was held over two days and was structured into four, two hour sessions. Due to the limited venue space, and because we did not want the seminar to become impersonal, the number of participants was limited to one hundred. This figure was easily achieved and the seminar was booked to capacity well in advance. 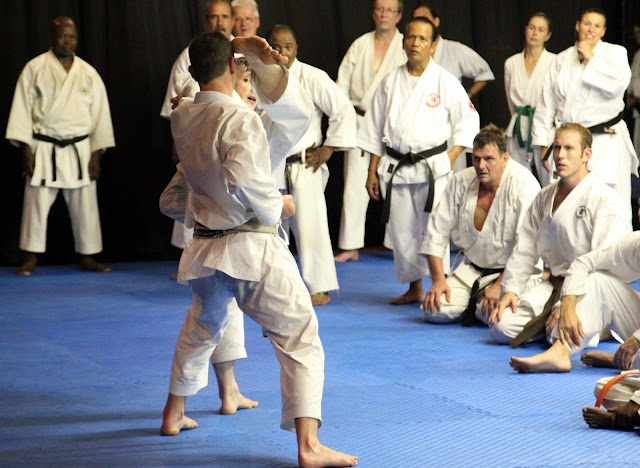 The seminar participants were a mixed group, ranging from children to adults who varied in level from novice to advanced. The most senior grades in attendance were Tony Williams Sensei and Kenny Tawse Sensei, both well-known and respected karateka from the Eastern Cape Province. Bryan Dukas Sensei, who had previously trained with André Sensei in Japan, also made the long trip from Gauteng Province to attend the seminar. Neither age nor grade seemed to have any bearing on the participants’ enjoyment of the seminar. André Sensei’s dynamic teaching methods and inspiring approach - as an instructor, communicator and karateka - instilled enthusiasm and vigour in all of the participants, even though the training was sometimes physically demanding.

André Sensei’s seminars are well-crafted and balanced, and as such carry wide appeal. With his structured, step by step teaching methodology, participants are able to comprehend fully the principles which he conveys. Often during André Sensei’s visit, I would see him reviewing and/or making notes or analysing video footage of his seminars. He is highly critical and analytical of both his teaching methods and practice of karate; and also welcomes input from participants who attend his seminars. I believe that his success as a karateka and international instructor is due, in part, to the significant introspection which he practices.

In the week following the Open Seminar, Maureen and I were extremely fortunate to enjoy private tuition from André Sensei while he was a guest at our home in Grahamstown. With Maureen, André Sensei focused on Jitte while I received instruction in Meikyo Nidan. Apart from the private sessions at our house, André Sensei provided additional formal training which was exclusively reserved for the brown and black belt members of East Cape Shotokan-Ryu. The intensive training was exceptionally rewarding, and our instructors have gained immensely from these sessions.

André Sensei also readily agreed to instruct a class in Joza Township, one of Grahamstown’s previously disadvantaged communities. The impact which this generous gesture will have had on these young karateka is immeasurable, and will be remembered for many years to come.

Many of André Sensei’s harshest and most misguided critics would regard him as being outspoken and self-important. I believe that this couldn’t be further from the truth. Unlike many self-proclaimed karate ‘masters’, André Sensei does not hide behind a keyboard, prominent world association, dan grade or title; instead he leads by example, placing a tremendous amount of focus and energy on self-training. Through ongoing self-analysis he is continually refining and improving the efficacy of his own karate. Based on the principle of ichigeki-hissatsu (to kill with one blow) and given his personal experience within the security industry, his training is extremely effective and relevant to karate as a practical form of self-defense. In my estimation, this is a welcome and necessary antidote to the current world focus on sport karate.

Moreover, during the time that André Sensei spent with us, he continuously encouraged us to apply similar forms of self-analysis. He advised us to test his methods during impact work and kumite, so as to draw our own conclusions. He certainly did not advocate that we should blindly follow his ideas.

In addition, André Sensei’s ability as an extremely effective communicator and teacher sets him apart from many instructors. His understanding of Japanese culture and language allows him to convey the subtleties and intricacies of karate which are often misunderstood and/or overlooked due to language barriers. André Sensei is also extremely generous when it comes to imparting knowledge and experience. He is accessible, and encourages questions from participants. He shows a genuine interest in the karateka attending his seminars, and his desire to see them improve is clearly evident.

André Sensei maintains that, should he be unable to return to a country for a follow up seminar, participants will already be equipped with the key principles of his teaching. That said, and with his incredibly infectious approach to traditional budo karate taken into account, it is not difficult to see why André Sensei is continuously invited by federations to return for further seminars. After spending a considerable amount of time with André Sensei during his recent visit to South Africa, I have gained an even deeper respect for him – not only as a karateka and teacher, but also as an exemplary human being. 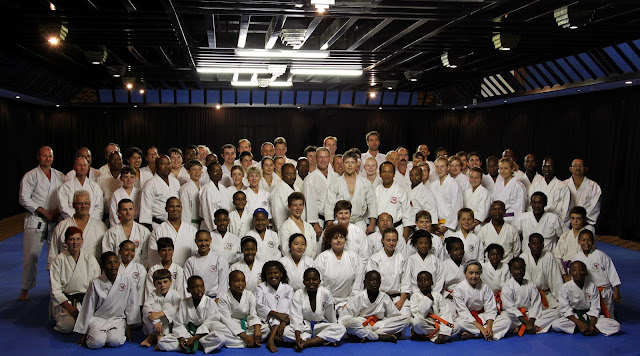