Some karate media
*************
Here are some internet media links in case you haven't seen them! The first is a demonstration with As

ai Sensei I uploaded on Youtube several months ago. Again I am sorry about the terrible quality! I have heaps of other footage I want to upload, but as you can see by this clip, I've had plenty of trouble transferring it from video tape. The other main problem has been the PAL to NTSC transfer, not to mention the worn out (poor quality) state of my recordings. http://www.youtube.com/watch?v=dYYQauucQA8

John Cheetham's Editorial for Shotokan Karate Magazine's 80th Issue (commemorating 20 years of this excellent publication). I was greatly honoured as it featured my 2003 New Zealand interview with Asai Sensei. Check out the Editorial comments! http://www.shotokanmag.com/index.php?option=com_content&task=view&id=45&Itemid=41

My final competition results, as a serious tournament competitor, the 2005 K.A.N.Z (Karate Association New Zealand) National All-Styles Karate-Do Championships. Would you believe, I competed after having serious food poisoning! I literally lost several kilograms 24 hours before the championships! That was an experience I will never forget, moreso than winning any plastic trophies or medals... http://www.kanz.org.nz/index_2005_nationals.html 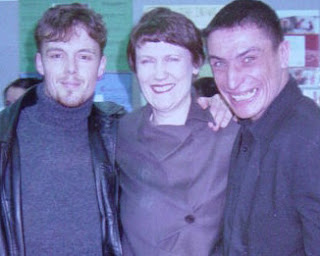 In August of 2000 I was asked to give a karate demonstration for the Prime Minister of New Zealand, Helen Clark. I had my student Lyall Stone assist me. This picture was taken after the lunch and discussions with the Prime Minsister and her security staff. You don't get much better media than that!
© André Bertel, Japan 2007
Posted by Andre Bertel at Thursday, June 28, 2007