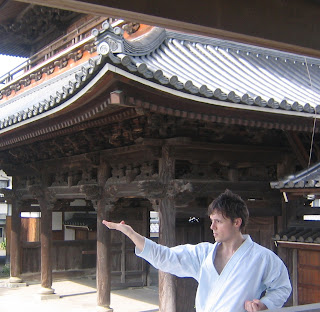 This article I originally wrote in January of 2002. I dug it up as several of my students have been requesting an article on Gohon kumite (Five Step Sparring). It is pouring down with rain here today... I guess Japan's rainy season has finally arrived, actually it has been unusually late this year (I was just distracted by a rather sudden and spectacular down-pour). To all of you facing the challenge of gohon-kumite, at your next examination, I truly hope this gives you some useful hints. I am off now to do some walking, or better still, some gohon-kumite steps, in the rain. Regardless of the weather in your neighbourhood on planet Earth, happy training to you!

While studying at the Christchurch College of Education and the University of Canterbury to become a school teacher, I became very familiar with lesson planning, and effective assessment methods. Everything in ones planning and lesson delivery had to come back to the AO’s (Achievement Objectives) established by the New Zealand Ministry of Education. The assessment process had to verify whether the objectives had been met by the students.

I believe it is essential that instructors clearly understand the core objectives of any given requirement in the grading syllabus. Unfortunately this is often not the case. It is also important that the students fully understand these objectives as well, so they can maximise their training time. From my several trips to Japan, I have discovered that many karateka outside of Japan are confused, in regards to training exercise objectives. According to Asai Sensei this comes back to language and cultural barriers, and within Western karate circles, the instant correlation to jiyu-kumite (free-sparring) we make, when `kumite’ is attached to a drills name.

Often, us Gaikokujin overcomplicate our karate, particularly in regards to the fundamentals, trying to bridge everything closer to `jiyu-kumite’. This is precisely why the Japanese have such a high level of technical prowess. I hope this simple article on Gohon kumite (Five step sparring) can help instructors, and karateka in general, fully understand and perform standard Gohon kumite both correctly, and with the proper achievement objectives in mind.

What is Gohon Kumite?
Gohon kumite in its standard form (grading syllabus `required’ method) is kihon yakusoku kumite or basic pre-arranged (promise) sparring. Essentially it is fundamental training, with a partner in front of you, adding the elements of distance, timing and physical (and psychological) interaction with an `opponent’. The name five step sparring literally means there are five basic kogeiki (attacks), and five basic ukete (receptions or blocks) followed by a hangeiki-waza, or counterattack, on the fifth and final step. Roles are then reversed, with the attacker taking the role of the defender, and the defender becoming the attacker.

The purpose of training in the standard method:
Correct kihon with a partner. That is it! The attacker and defender must groove the following into the subconscious mind:

(a) Correct zenkutsu dachi i.e. – when blocking correct hanmi (half-facing position of the hips, with the rear leg contracted). And when attacking/counterattacking – full shomen (hips/ shoulders `square on’ with the rear leg locked straight or 'expanded').

(b) Posture exact at all times. The pelvis/hips, back and neck must remain completely erect. This is particularly notable when counterattacking. If you are out of distance, you MUST NOT lean forward. Remember, the achievement objective of Gohon kumite is basic technique training with a partner, rather than Jiyu Kumite (free sparring).

(c) Correct kokyu (breathing). Both partners must not hold their breath. Breath naturally and harmoniously with your opponent. Ideally, if your opponent inhales, you inhale, if they exhale, you exhale. Related to kokyu is the `kiai’. When making your fifth and final attack, always kiai strongly (perfectly coordinate your kiai at the completion of your punch or kick - where kime is made. A common mistake is doing a 'late kiai'). Likewise, kiai strongly with all of your gyaku zuki counterattacks. For those testing for low kyu grades, a strong kiai is particularly influential on the pass and fail marks, so don't be shy and kiai with spirit!

(d) The jiku-ashi (pivot foot) must remain `set’ whether advancing with the attack, or retreating. When attacking, the front foot must not telegraph your step by moving. Likewise, when retreating, the rear foot must stay `set’. That is, the heel must not rise up, and the foot must remain in place (never use slide, or half step, to make rearward motion seemingly more easy).

When being tested on Gohon kumite at gradings, the examiners are primarily searching for:

(1) Exact basic stance (zenkutsu dachi) and posture of the pelvis/hips, back and neck at all times.

(2) Position of hips and upper thy/knee (shomen & hanmi) in zenkutsu dachi. Note – related to this is the height of the hips. In both attack and defence, the hips must not change in height, nor tilt. 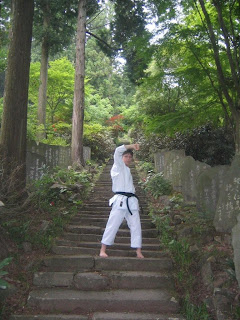 (5) Timing of blocks (the defender must wait or `react’ to the attackers technique. The block must divert the attack without excessive motion (i.e. – over-blocking). Note the importance of timing to cause damage: If your aim is to impact hard with your blocks, you can do this more powerfully, without overblocking. Simply focus on your elbow/hip connection, and pull back rapidly with hiki-te. If you simultaneously time your step (landing, and rear leg thrust), decisive blocking action, hiki-te, and 'locking in' of your lower abdomen/hips, you will transfer maximum energy to your training partners limb. Do not do this unless your partner wants to 'train hard', otherwise I see it as highly disrespectful, and potentially bone crunching.

(6) The defender must counterattack with chudan or jodan gyaku zuki. The technique must demonstrate control, and maximum power from rear leg drive and hip rotation. Note: In the basic syllabus form, the counterpunch MUST NOT be snapped back. It must be left extended with hiki-te (pull back hand) tightly pulled back on the opposite hip.

(7) Complete zanshin (awareness) must be maintained after the punch. The defender should not be hasty in returning to shizentai (natural position). Both partners should move slowly showing martial spirit and readiness for a surprise attack. This is also training for waza no kankyu or 'technical rhythm'.

(8) Your confidence! Decisively step back into zenkutsu dachi and 'snap' your gedan barai. Announce your attack (either `jodan’, `chudan’ or `mae geri’) firmly, but don't bellow it out like the typical sports karateka. Kiai strongly on your fifth and final attack. Likewise kiai strongly on all of your counterattacks with gyaku zuki. ''Kiai sharply as opposed to sounding like a fog horn!''

(9) Explosive power and kihaku (fighting spirit) must be demonstrated, but not at the expense of the previous eight points. Otherwise, the objective of Gohon Kumite, as partner kihon training, is invalidated, as the core purpose of the exercise is diminished. Regardless of how much power and speed you perform your Gohon at, keep it picture perfect (that is, from start to finish in each action).

(10) Hyoteki (target). When attacking or counterattacking, aim at effective targets (ideally weak points such as the ribs, solar-plexus, temple, throat, kyusho also the jaw line etc. Likewise do the same when attacking. WHEN ATTACKING, NEVER AIM TO MISS YOUR OPPONENT as you will only be 'short-changing' yourself, and your training partner.

Additional tips to perfect Gohon Kumite:
One key point is to not rush, make each technique with full commitment and pause between each step. Consider Gohon Kumite as kata with a partner. The attacker must lead the exercise with the defender responding to the stimuli of the attack. As I said in the previous tip, aim to make each technique picture perfect. After the fifth step: If attacking, always step back into shizentai; and if you are the defender, step forward into shizentai, after counterattacking.

Standard kyu/dan-shinsa requirements:
Gohon Kumite is typically required for the 8th, 7th and 6th kyu examinations. Only jodan oi zuki and chudan oi zuki attacks are tested for, in the 8th and 7th kyu exams. Jodan oi zuki, chudan oi zuki and chudan mae geri are tested in the 6th kyu exam, and also often in the shodan exam (to test the core basic `line-defence’). No tai-sabaki (body evasion) is permitted in Gohon kumite, this is because karateka must be able to deal with sudden attacks where evasion is impossible. This fully tests their ukewaza (blocking techniques) in isolation – in particular their timing and blocking trajectory. I have even sat on a grading panel where Asai Sensei had Nidan examinees demonstrate Gohon kumite, and were failed for their 'un-committed' mae geri attacks and defenses.

Conditioning:
Gohon kumite if trained in the manner described above, will provide basic conditioning for the karateka’s limbs (in blocking and attacking). The attacker must aim to hit, and the defender must block properly. This initially can be painful, but with practice, the karateka will become stronger. It is essential that those who follow the karate way seek to physically strengthen themselves, and avoid taking shortcuts. With training, the limbs will calcify and highly effective blocks (limb attacks) will be developed. In the case of older people, and those with medical issues, such as haemophilia, osteoarthritis etc., padding can be used, or simply a reduction in the level of contact (focusing more on timing). I believe that karate training, when it comes to p 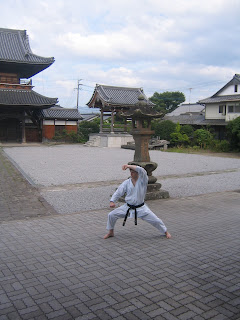 hysical contact, must be customised, according to the needs of the individual. Otherwise, karate becomes an exclusive activity for those who are young and strong. In saying that, in real fighting/self-defense, there are no compromises, and this opens a huge field for discussion/debate.

Conclusion:
For higher ranks there are many advanced variations of Gohon Kumite, however, the most basic form is by far the most essential. The key, regardless of the training drill, is to always keep in mind the 'achievement objectives' of what you are doing. Gohon kumite is not jiyu kumite, it is basic form with a partner. Therefore, when practising Gohon, always seek perfection of the kihonwaza/fundamental techniques.