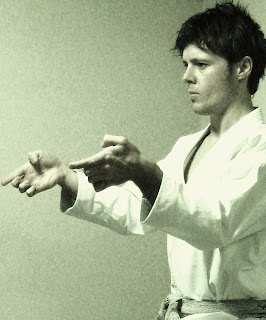 There are five formal exercises referred to as the ‘Shizen no kata’ (natural kata), nicknamed in English as ‘The Natural Element Kata’, by my late karate teacher, Asai Tetsuhiko.
_______
To state the obvious, only one, Unsu/Unshu, is amongst the ‘standard’ 26 Shotokan forms. However, Asai Sensei claimed that the other four kata, Kashu (Hi no te), Suishu (Mizu no te), Roshu (Nami no te) and Hushu (Kaze no te) were also koten (ancient/classical) kata. Other comments by Sensei suggested that Suishu, Hushu, Roshu and Kashu were actually ‘hybrid kata’ combining/recording a variety of koten-waza (ancient/classical techniques). I believe Asai Sensei did indeed engineer them based on numerous martial arts techniques, and strategies, not found within mainstream Shotokan. I personally think that these techniques came from a combination of Chinese Boxing, the karate of Okinawa, and Sensei's own kumite experimentation. Regardless of their origin, as a personal student of Asai Sensei, I didn’t concern myself with their history, only to improve my ability as a martial artist, based on his ‘karate way’.
_______
The reason Asai Sensei introduced the additional four ‘Natural Element Kata’: Sensei taught these kata to provide himself with a clear canvas to teach 'natural movement'. He said to me that “Unsu is enough, however, when teaching at courses, it is often difficult to correct peoples ‘use of energy’, they turn into robots * when you ask them to perform one of the famous Shotokan kata”. By teaching Kashu, Hushu, Suishu and/or Roshu, Asai Sensei could capture each students complete attention, (via their enthusiasm to learn something new, such as a fascinating kata) and therefore open up their minds to using ‘natural energy’.
_______
* Asai Sensei often said that "WKF karate kata is rubbish, it's gymnastics not fighting kata". He hated sports karate because he claimed it was invalidating karate as an effective martial art.
______
Profiles of the natural element kata: Originally, when I started to compose this article, I thought of giving individual profiles of Unsu, Kashu, Suishu, Roshu and Hushu, based on what Asai Sensei told me candidly. However, I changed my mind, as that is not what Asai Sensei really emphasized. I know 100% that he would have preferred me to give a broader explanation based on 'natural movement', which is what these kata are primarily for. If I were to give descriptive explanations, based on what he said, I'm sure you'd be distracted by visualizations of calm rivers suddenly turning into rapids; the fluctuating energy of waves and tsunami's; typhoon's and tornado's; the unpredictable movements of forest fires; and the like. When Asai Sensei demonstrated movements, they really resembled these descriptions, and sadly, I cannot put these phenomenal displays of karate into words. Perhaps the best thing I can say, to anyone who reads this, is that Asai Sensei closely analyzed nature to develop his movement, and used the 'natural elements' as his own 'sensei'.
_______
For me personally, the practice of Kashu, Hushu, Roshu and Suishu has significantly enhanced my kata and kihon for effective fighting. Why? Because they have taught me that effectiveness is determined by natural movement. As Asai Sensei stressed about the forms he introduced; "There is no problem merely focusing on the famous Shotokan kata, but if you do, use natural energy. Don't perform kata just to look nice, do it for real fighting. Kata is more beautiful when it is bujutsu." 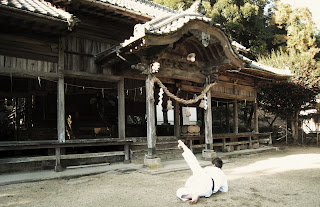