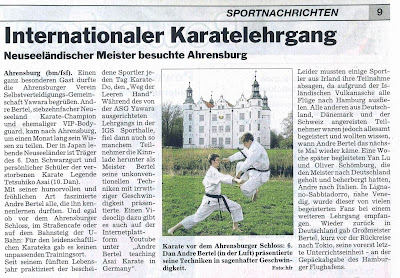 Many thanks to Oliver Schomburg for sending a copy of this newspaper article (and translating it into English). You can click on the article to read it in Deutch.
_________
Translation:

The martial arts club ASG Yawara in Ahrensburg had the opportunity to welcome a very special guest. Andre Bertel, seventeen times New Zealand national Karate champion and former VIP-bodyguard, came to Ahrensburg to share his knowledge for one month. The New Zealander who lives in Japan is bearer of a sixth Dan black belt and was personal student of the late Karate legend Tetsuhiko Asai (10th Dan). With his humor and cheerfulness he fascinated everyone who was lucky to meet him. And be it in-front of Ahrensburg castle, in a street café or on the platform of the underground station. No training place was inappropriate for the passionate Karateka. Since the age of five the humble sportsman practices the “way of the empty hand” every day. As a result, many people’s jaw dropped when master Bertel demonstrated his unconventional techniques with lightning speed during a seminar, organized by ASG Yawara on 17. and 18. April. A video clip is available on the internet platform Youtube under “Andre Bertel teaching Asai Karate in Germany”. Unfortunately, several Karateka from Ireland had to call their seminar attendance off. Due to the volcano ashes from Iceland all flights to Hamburg were cancelled. However, all other participants from Germany, Denmark and Switzerland were hooked and wanted to know when Andre Bertel would come back next time. A week later Yan Lu and Oliver Schoemburg, who had invited and hosted the master, followed Andre to Italy. Many fans awaited him in Lignano-Sabbiadorro, near Venice, during another seminar. Back in Germany, master instructor Bertel gave his last training session for the time being, before returning to Tokyo: at the check-in counter of Hamburg airport."
_____________ 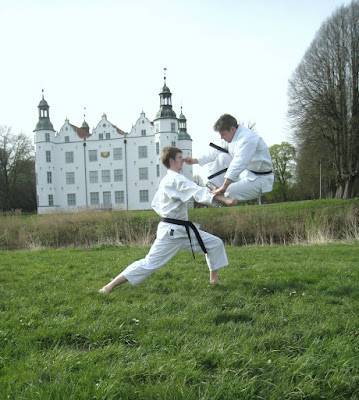