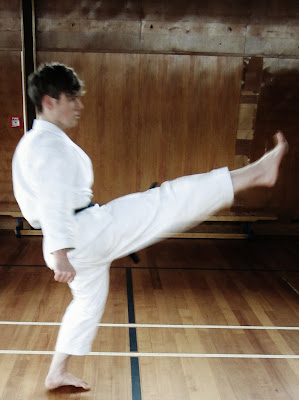 There are two broad problems amongst karate practitioners: The first is “poor technical form”; and the second is “obsession with form”. While these are at opposite ends of the scale, they both result in ineffective karate.
Problem one – OBSESSION WITH FORM:
Obsession with form is the problem which most, if not all mainstream Japanese organisations typically have. What happens is that they are so consumed by form that they spend too much time on cosmetics as opposed to making their karate effective. Of course, karateka should always be seeking better form, but form has purpose and this purpose is to achieve effectiveness within the context of the style one does i.e. – Shotokan, Shito-ryu, Goju-ryu, Wado-ryu etc. A great example is Mikio Yahara Sensei who is known for his stiff ankles. His back foot in zenkutsu-dachi cannot go much beyond 45 degrees and his kokutsu-dachi rear foot simply doesn’t get to that 'textbook ideal' 90 degree angle… Needless to say, he still has wonderful karate. I can 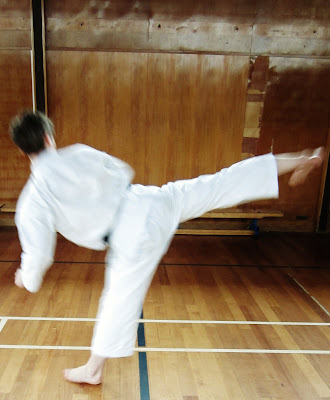 personally relate to this (with my stiff ankles) and similarly have never found it to lessen my effectiveness (note my kizami-zuki photo from todays training). A fellow instructor once said to me "you can't do zenkutsu-dachi with your rear foot at that angle". So I replied by saying "you think about my rear ankle while swallowing your own teeth". My question is when did zenkutsu-dachi and other karate techniques/movements/stances become so obsessive?

Another example is of course is my late instructor, the legendary Tetsuhiko Asai Sensei, who was limited by his small frame. People criticise the continuity of his movements, but this is how he made his karate work for himself.

Obviously, this doesn’t mean we can just settle for lapses in our form or personal abilities. The art of karate is 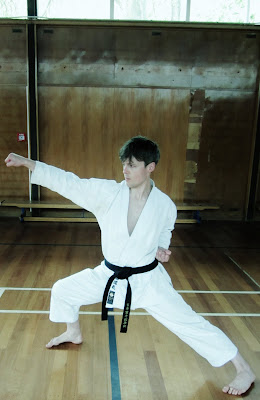 to constantly seek `personal perfection’… Not obsessively but with application in mind. Moreover, SOME THINGS DO MATTER AND MUST BE DONE otherwise our karate will be useless. For example the correct use of kokyu (breathing), tai no shinshuku (contraction and expansion of the body), koshi no kaiten (rotation of the waist) etc. Someone like Asai Sensei could break a damp hardwood board a foot behind his head (without utilising his waist); thus, to copy his favoured small-scale hip action would clearly be foolish…
Problem two – POOR TECHNICAL FORM: Poor technical form means “incorrect form and ineffectiveness”. Incorrect form is `style based’ and ‘ineffectiveness’ is dependent on one’s ability to apply techniques. In the case of smaller people, we must develop ways to make up for our smaller body mass and strength. And for bigger people, often speed is an issue. Of course, these are mere generalisations… We all know big people who are very fast and small people who are amazingly strong. My point is that poor technical form is not only about form but its relationship with physicality. If you want to discuss correct positioning 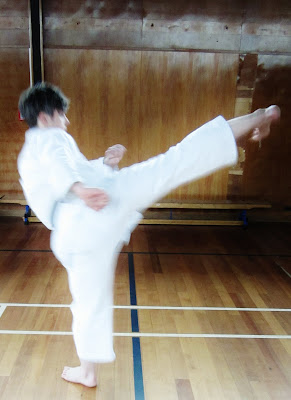 and movement compare the greats i.e. – Sensei’s Asai, Kase, Enoeda, Yahara, Osaka, Imura, Ueki, Tanaka etc. They are all different but the important points are the same and all of them have or had destructive karate-w 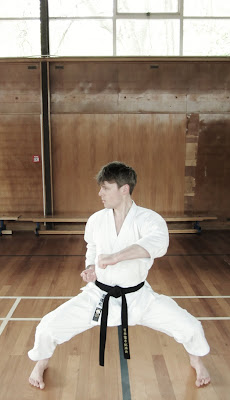 
Karate is about GOING WITH WHAT YOU HAVE GOT / OPTIMISING WHAT YOU HAVE! Not settling for less, but aiming to have the best technique you can. The secret is to not be obsessed with form but rather use form as a vehicle to optimise the application of your techniques. Asai Tetsuhiko Sensei once said “Kihon is for kumite, kata is for kumite and kumite is for kumite”. His point was that while karate is an art as opposed to a sport, it is first and fore-mostly a MARTIAL ART.