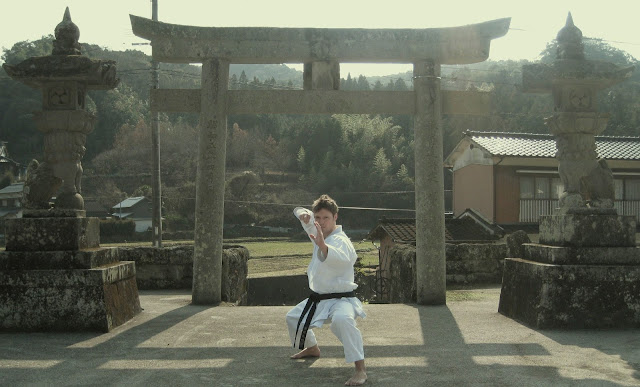 The weakest point of most people’s karate, especially yudansha (holders of dan grades) nowadays, is failure to use the kahanshin (lower body) correctly. Irrespective of rank, tournament accolades and the like, failure to use the kahanshin correctly means that the person is literally not worthy of dan. The reality is that many of the current “world karate champions” and people having high dan ranks, including those from Japan, execute their kihon and kata without properly using their kahanshin; thereby, taking away (or more commonly, "seriously limiting") karate's prime source of power. For that reason, it shouldn’t be surprising that many people view karate with contempt: insofar as being an effective martial art. 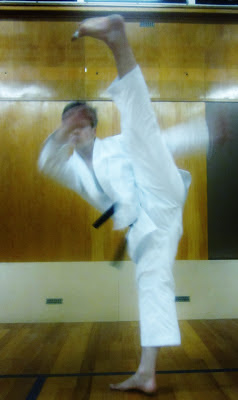 As discussed countless times before on this website, rotation of the waist is also insufficient without the drive of the legs. Personally, I teach that the rotation and/or driving of the hips is an automatic consequence of leg thrust, as opposed to being an independent action; moreover, it is harmonious with one’s waza (technique), unsoku/ashi-hakobi (foot work), kokyu (breathing) and zanshin (mental preparedness).

From this common-sense perspective, which like all things in karate must not only be theoretically understood, but must be perfected and maintained through regular training, simple kihon-geiko is paramount. I’ll say this again… just "knowing the theory" is useless: one must train.

How to train? In particular, to develop the kahanshin, stationary kihon is essential. The most simple ways are: (a) practicing koshi no kaiten (hip rotation) from hanmi into shomen in zenkutsu-dachi (and naturally in other tachikata as well); (b) training individual techniques from tate-shuto gamae i.e. - gyaku-zuki , yoko shuto-uchi etc; and (c) renzonkuwaza: most commonly kizami-zuki kara gyaku-zuki.

From there, ido-kihon, training in jiyu-dachi and impact work must be done. Of course, practicing kata and kumite further groove the proper use of the kahanshin. Overall, the full use of the kahanshin must remain homogeneous if one wishes to practice karate: as the unsurpassed martial art of self-defence that it can be when practiced correctly.