A reverse look at kihon-centric karate: the karate-do of contemporary Japan

One of the common criticisms of modern day Japanese karate, by Western exponents, is the “high level focus on kihon”—and purported lack of `street effective applications’ (especially pertaining to the kata). In response to this, many Western karateka have put a huge amount of effort into developing oyo (applications) and, in some cases, have become dedicated to this aspect of karate. Today I’d like to offer my opinion on `kihon centric karate’, which essentially is that “the extreme focus on kihon—in contemporary traditional Japanese karatedo—is a major improvement on the karate of the past”. Furthermore, that it is consistent with the original (traditional) objective of karate techniques: ichigeki-hissatsu…to develop the capacity ‘to finish an attacker with a single blow’.

Before I go on, I’d like to stress that I also practice and teach the applications of kata; what is more, I wholeheartedly emphasise that “…not `physically and instinctively understanding’ effective oyo turns kata into what I dub “TTW’s” (`Training-Time-Wasters’)”. Nevertheless, I believe that KIHON is the first and fore-most priority in karate training, without which any `effective application of karate’ will very limited—“especially in the multidimensional blur of a violent encounter”.  Put another way, when someone starts `smashing into you relentlessly’, all the fancy stuff goes out the window; hence, kihon becomes the most essential `technical point’ in determining one’s self-defence capabilities.


Let’s take a trip back to the time `before kihon’, where it is alleged that training was exclusively kata. Suddenly Funakoshi Gichin Sensei introduced kihon, simple kata (namely, then three Taikyoku and Ten no kata), and very simple yakusoku-kumite (prearranged sparring). He even reduced the number of kata down to 15 (in addition to the aforementioned four that he, and/or his son developed). While it is regularly argued that Funakoshi Sensei was making karate into a `less dangerous’ martial art (from what he learned in Okinawa), I do not believe that this provides a full picture. Certainly, on some levels, this idea has some truth in it; however, I think you will agree that ‘nothing in life is black and white’. Accordingly, I believe that he: (a) improved karate for his `introduction’ of it on mainland Japan; (b) made karate more accessible for a wider spectrum of society—karate as a ‘do’ form; and (c) also made karate ‘more combat effective’ based on traditional concepts… This `killing of three birds with one stone’ was achieved via his introduction of (and extreme emphasis on) kihon training.

My rationale for believing this does not need to be explained, insofar as making karate `more accessible to everyone’ and `putting safety catches’ on techniques (this is all very well documented online and, of course, in numerous publications); that being said, his increasing of karate’s combat effectiveness obviously does.
Essentially, Funakoshi Sensei realised that karate cannot compete with Judo in a grappling situation, nor was it like boxing… He did not believe in karate `for fighting’, and only believed it should ever be used `when no other option was available’. From these ideas, which can be found throughout his writing, it is clear that the karate-do of Funakoshi Sensei was not “a watered down beast”… On the contrary, he wanted his students to become more effective in a life or death self-defence scenario. His answer was to practice `the most effective techniques, over-and-over again`… KIHON TRAINING WAS BORN.

Funakoshi Sensei was a clever man—a school teacher and deeply inquisitive martial artist; consequently, he conjured up pedagogically sound methodologies that could extensively advance karate as a martial art. Firstly, that “…by repetition, key points become more instinctive”; thus, quicker technical progression is imminent. Secondly, that training kihon increases ones ‘physicality’ to execute techniques. And thirdly, from these previous two points, one can more efficiently apply the oyo-jutsu embedded in the kata.
Another phenomenon also occurred, which led to kihon-centric training in contemporary karate practice… Via `kihon-centrism’ Funakoshi Sensei saw an unprecedented rise of technical skill amongst his students in Tokyo. This new breed of karateka “…was `physically and technically exceeding anyone’ he had ever encountered’’. By and large, his `kihon practice methodology was verified as being a superior training method’. Further highlighting this point, the `kihon curriculum’ of Funakoshi Sensei was soon `being mimicked’ by all of the other ryuha and kaiha (schools/styles of karate). This point should not be overlooked, as it was well before the existence of competition karate. 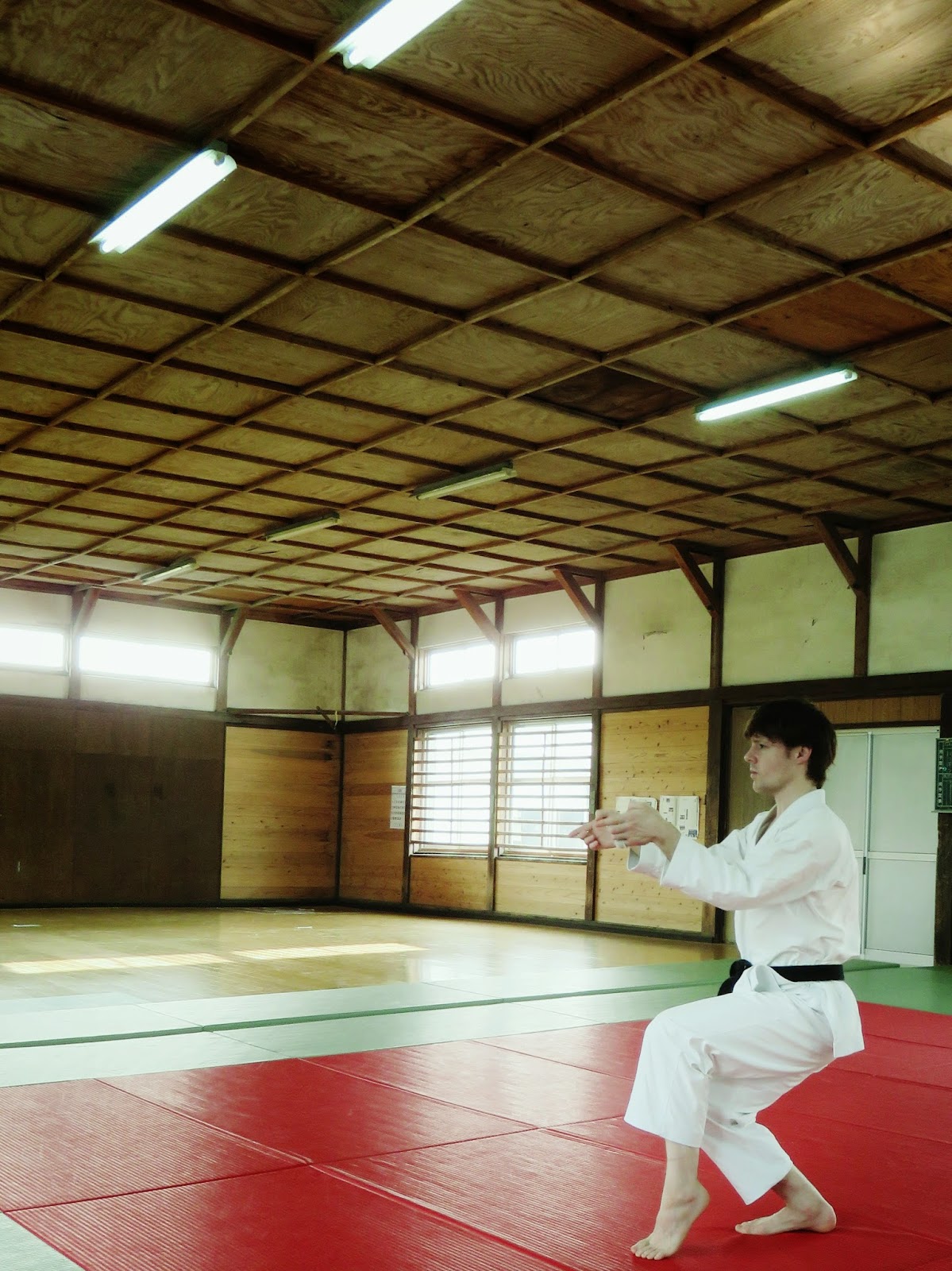 On the whole, I’d like to emphasise that understanding the oyo of kata is absolutely essential; however, kihon is even more essential. Analogically speaking, you can think of kata as conventional power, and kihon as atomic power. I will leave you with this thought. Osu, André.
© André Bertel. Aso-shi, Kumamoto-ken. Japan (2014).