To address many people around the world, who have requested this topic, today I will briefly describe and give a handful of tips on proper Jiyu Ippon Kumite. I hope that you all find that this covers your questions. 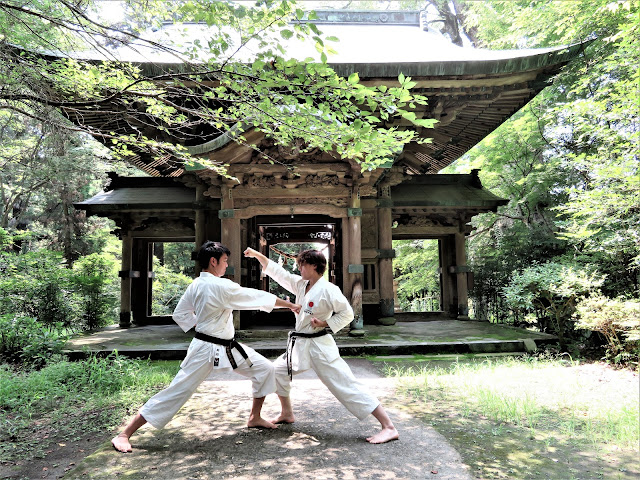 Description of Jiyu Ippon Kumite: After bowing the training partners face each other in shizentai (hachiji-dachi)―with ryoken daitae mae―with one partner as ‘the attacker’ and the other ‘the defender’. They both then advance into jiyu-dachi with a freestyle kamae and a spirited kiai: followed by announcing their respective attack.

A)    The Designated Attacker: Prior to launching each offensive technique the attacker announces their attack, then, moves forward to get their optimal maai. This maai is the optimal distance, in which, their respective percussive technique will achieve the greatest damage to the anatomical target. When this position is achieved, the attacker 'launches in with full commitment' with a 'do or die mentality'. Upon the completion of their attack they maintain zanshin in a strong forward facing tachikata.

B)    The Designated Defender: In the case of the defender, they must not backpedal nor run away; instead they must hold their ground. A rearward movement with defense is acceptable, but only at the last moment: in the case achieving the best maai for counterattacking.

Ukewaza―Reception techniques are usually as follows: (i) Jodan age-uke; (ii) Chudan soto-uke; (iii) Gedan-barai; (iv) Chudan soto-uke; and (v) either Chudan uchi-uke or Jodan haiwan-uke. The hangeki, or counterattack, is usually either jodan or chudan gyaku-zuki. I'd like to stop here and explain why this is the case.

Hangekiwaza―An important note on hangeki (counterattacking): “…the expert instantaneously selects most direct and simple option”: Some styles, organizations and clubs practice a plethora of hangekiwaza in Jiyu-Ippon and other forms of Kumite. Significantly in contrast with this ‘stylistic approach’, elite karateka must never ‘consciously choose from techniques’ but, rather, spontaneously react with the most effective and immediate/simple option. In karate, this is gyaku-zuki due to the aforementioned points; furthermore, muscle memory via fundamental training and kata. In sum, this goes back to the maxim in Japanese Budo: "…mastering a few techniques results in trustworthy effectiveness; whilst merely collecting a multitude of techniques―is nothing more than shallow movement―irrespective of outward appearance/style”. Ironically, with mastery of the gyaku-zuki counter, the karateka will automatically counter with, say, a  mae-geri (when the distance is out), and hiji/enpi-uchi, hiza-geri, etcetera, when up close.

On the whole, once all of the attacks are completed, the roles of attacker and defender/counterattacker are reversed. This process can continue, or―as typically done in a general/group class context―(after fulfilling both roles) training partners change. Irrespective of this point every time the drill concludes karateka display mutual respect by engaging in ojigi which, in this case is the standing bow.

Some tips for training…

Obviously I cannot list everything, in a post; however, here are some key points, which are often done insufficiently:

1.0)    The attacker is the main person in all forms of Yakusoku Kumite, including Jiyu Ippon Kumite; consequently, if their attack has incorrect maai, or they do not sincerely aim to hit their opponent, the training is completely wasted. I see this a lot on videos of Western instructors who post a lot on Youtube. Here in Japan, amongst serious karateka, we try our best to hit, not cooperate with the defender.

1.1)    Still, as Jiyu Ippon is completed in one action, the attackers tsuki and keri must not chase the defender but, rather, impact on target ‘where it is’. In this way, the attacker is forced to develop swift techniques, as opposed to pointlessly relying upon ‘drill based’ prediction.

1.2)    Kiai on the attack, not only the counterattack. Often people forget to kiai on the attack, which is reflective of them just going through the motions. I’ll reiterate… The attacker must aim to defeat the defender. Here in Japan, in the serious dojo, you will go to hospital if you do not defend with all of your might. In sum, the attacker provides the stimulus in order elicit a useful response and, ideally (in the case of the attacker), that is optimally connecting their blow.

1.4)    Eliminate all tension: use junansei (softness) to generate speed/explosive power―via natural energy. Added to this, breath and technique are one: start and conclude together... More about this at a later date.

1.5)    Remember the weight of your attacking limb. Throwing this weight combined with launching the backbone forward helps to create large scale and penetrating tsukiwaza and keriwaza. While this is fundamental in Jiyu Kumite, it must always be fully expressed in Jiyu Ippon Kumite: which is regarded in Japan as the bridge from Kihon Kumite.

I will leave it there for today. All the very best from Oita City, Kyushu. Japan. 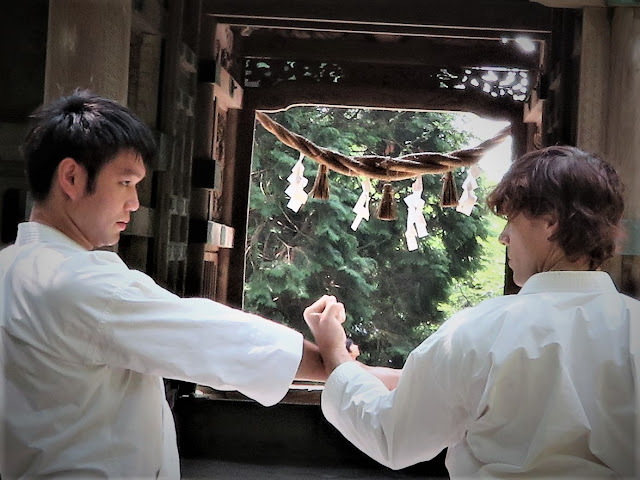