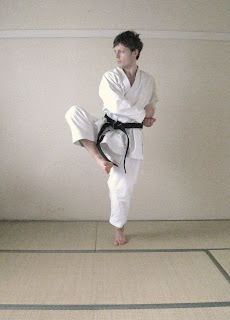 In this article I’d like to go back to the ‘basics’ and clarify the difference between the two main categories of karate kicks: keage (snap kicks) and kekomi (thrust kicks). Hopefully this be useful for beginner, intermediate and advanced karateka alike. Needless to say, after 20+ years of karatedo training, I’m constantly struggling to perfect the kihonwaza of Shotokan, and never cease to find shortcomings in my karate via them.

Keage: In keage (snap kicks) the knee of the kicking leg is pointed at the target before the lower leg fires out. The knee joint is fixed in position acting as a pivot. The kick is smoothly and rapidly whipped out, and back, precisely along the same trajectory.

Kekomi: In kekomi (thrust kicks) the knee joint drives from behind the kicking foot and likewise, it recoils it back, exactly following its outward trajectory. 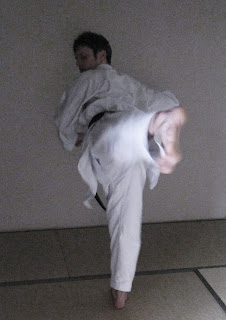 Conscious joint power as opposed to conscious muscle power: "Think of kekomi as 'driving kicks' and keage as 'whipping kicks'. And in both cases, clearly understand the roll of the knee joint to differentiate the two." - Tetsuhiko Asai Sensei prioritized joint power/control over muscle power and that is clearly illustrated in this fundamental example.
More similarities than differences: In addition to the above points, here are the other major similarities between keage and kekomi…
(1) Just like snap kicks, thrust kicks are withdrawn immediately. Momentarily suspending an extended kicking leg in mid-air doesn't make it a thrust kick! The appearance of the kekomi being 'held out' is its 'drive' in contrast to the 'whipping action' of the keage. The 'posed kekomi' is the result of competition kata aesthetics and the misunderstanding born from this.

(2) Both kicks maximize ‘tight chambering’ of the kicking leg. This is no different to a tight hikite in hand/arm techniques… In all cases, 'compress the spring' as much as possible.

(3) Full body weight is applied to both kicks, not only the thrust kick. Fully utilize the large-scale drive of the supporting leg and hips/pelvis towards the target. In principle, the support leg in snap and thrust kicks should be no different to the driving leg in oi-zuki.
_________
Conclusion:
If nothing else remember two points. Firstly; “What makes snap kicks different to thrust kicks is how the kicking knee joint is used”. And secondly; “The depth of technique-penetration in all kicks is prioritized over target height, if highly effective 'power' kicking is one's goal. That is, 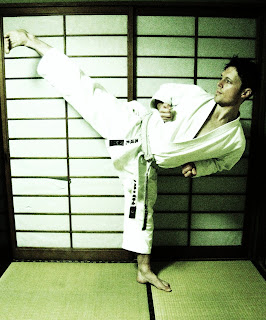 attack as horizontally as possible from grounded foot to the respective target. In all cases, if maximum impact is desired, the hips should never rise." If you get these two points correct, and your execution and application of all keage and kekomi should be optimal.