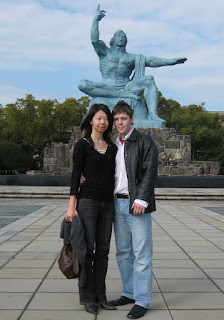 To commemorate two years in Japan Mizuho and I went to Nagasaki City for three and half days of R&R. We had such a great time wining and dining, sightseeing, and chilling out in general.
________

Naturally, whilst there, we also went to the Genbaku Kinenkan (Atomic Bomb Museum), and the Heiwa Koen (Peace park). Like our time in Hiroshima, this was an opportunity for us to reflect on the worst possible human suffering, death, and the horror of war.

Central Nagasaki: Besides our car navigation failing a few times, taking us down old streets with dead ends, or just wide enough to allow a scooter to get through, both Mizuho and I really enjoyed the central city. We stayed at the lovely Richmond Hotel Nagasaki http://www.yadoplaza.com/portal/PO10010?hotel_id=H000006055&mode=3 in Shianbashi, and this allowed us to conveniently use the infamous Romen Densha (Tram train) system. The vibe in Nagasaki is very different due to the lar 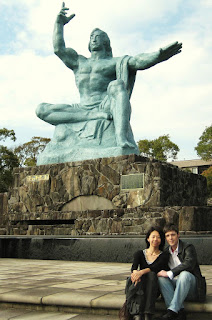 ge amount of European buildings and 'Christian influence' . This extreme merging of Japanese and Western culture (especially in regards to the architecture) is very unique.
________
A gondola ride and the night view of the city, from Inasayama, was one of Mizuho's targets, and fortunately the sky turned out to be very clear for her. Another target was to eat Champon and Sara udon in Nagasaki's Chinatown, which I'd recommend to anyone visiting the city. Delicious is the only word which comes to mind.
Hanami in Sasebo: On our way home Mizuho and I also had hanami in Sasebo City enjoying the beautiful sakura trees in full bloom. We did this at the Shinsaikaibashi and even managed to inhale a 'Sasebo Burger' in the process! Walking across the large bridge, the surrounding parks, and another bridge running parallel to it, ended up being really fun (and helped to burn off those nasty 'hamburger calories'). The warm sun, and refreshing spring breeze couldn't have been more perfect.
________ 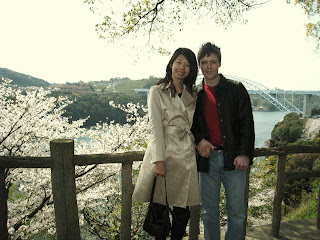 Overall this little holiday really recharged our batteries and was a great way for us to celebrate our second anniversary in Japan.
© André Bertel, Japan 2009
Posted by Andre Bertel at Tuesday, March 31, 2009