The real value of jumping techniques 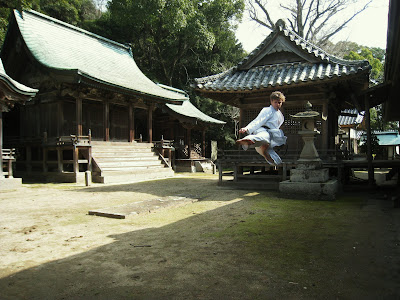 It is common knowledge about the major benefits of jump training such as plyometrics skipping, hopping etc. This is quite simply because jumping develops an athletes ability to recruit muscle fibres, enhance their explosive power and reactive strength. Including more jumping in your karate training will improve your ability to express power quickly, known as the RFD (Rate of Force Development).
_________
My late teacher Tetsuhiko Asai Sensei was noted for his jumping techniques and constantly advised me to practice them to develop my power. In the standard 26 Shotokan kata the most obvious jumping techniques include the juji uke in Heian-godan, the nidan geri in Kanku-Dai, the shuto uke in Empi, the nidan geri in Gankaku, both the shuto uke and mikazuki geri/ushiro geri in Kanku-Sho, the mikazuki geri/ushiro geri in Unsu and the sankaku tobi in Meikyo. In kihon, the traditional jumping techniques are tobi yoko geri, tobi mae geri and nidan geri. However, there are countless other variations. Asai Sensei 'taught me' (whack-crunch) that all techniques can be executed with/or from a jump. “Mr. Funakoshi knew what he doing when he added the additional jumping actions into the kata. This wisdom did not come from modern sports science but rather, a lifetime of karate training, and knowledge handed down from bushi (warriors) with actual combat experience.”
Masatoshi Nakayama Sensei wrote in Best Karate 3. “Tetsuhiko Asai’s ever-changing movements, 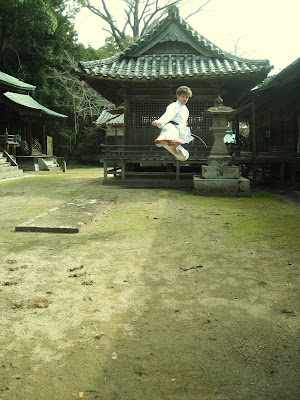 sometimes resembling a dance performed in the air, leave spectators gaping with admiration. His inimitable talent has its source in training since youth, fostering powerful hips, a flexible body, deep technical skill, excellent reflexes and nerveless courage.” Much of this strength and skill Sensei attributed to his extensive practice of jumping techniques (also techniques from a seated position, something I’ll write more about in a future article).
“Jumping with kicks, more than application is very good (karate specific) strength training, especially for young people. When you get older you can reduce, or discontinue such training, if you find it too stressful on your body”.
A brief sample routine: After a comprehensive warm up... (a) Stationary and ido-kihon; (b) Some form of kumite/partner application training i.e. - goshin-jutsu/practical application from the kata; (c) Kata; (d) Impact work; (e) Strength work... I will expand on this. Here you can incorporate a jumping technique such as tobi yoko geri until failure. Note - the jumping exercises/strength component of training is based at the end of the practice, to avoid hindering the 3 k's (kihon, kata & kumite) via fatigue. Also this way you can give 100% of your remaining energy to leap more explosively, which means you will gain the most from your jump training. Conclude the session with a thorough warm down to speed up recovery for your next practice.
________
I’d like to wrap up by saying that the most important kihon training is found in standard Shotokan, however, if one wishes to maximise their karate, as discussed in this article, jumping techniques in the strength portion of your training, are very beneficial. Like so many techniques in Japanese budo, actual application is often less important than the training (& perfection of mechanics) they provide for our bodies. As the power of karate comes primarily from the legs, waist and back, developing explosive spring from the legs is crucial not only for kicking but also punching, blocking and striking. Needless to say, by transferring the power, gained from jump training, to 'horizontal drive' in the core fundamentals, we can forge very deep/penetrating techniques. Whilst a jumping technique can be effective in application, I hope that this article clarifies that they have far greater value, 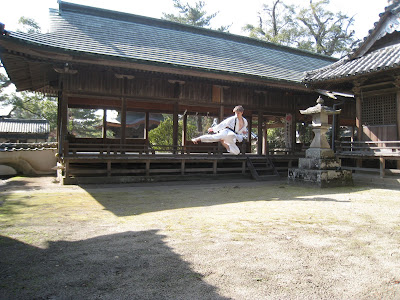 than merely this novelty.