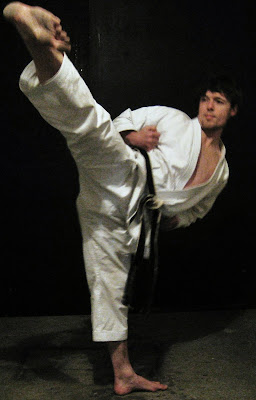 Rather than giving my own definition of karate-do I thought it would be most appropriate quote Nakayama Sensei. But before I do so, I’ll explain why, by extracting a section from an article I wrote for my dojo newsletter in 1993.
_________

“My karate teacher and Japan Karate Association Chief Instructor Tetsuhiko Asai was taught by none other than the late master Masatoshi Nakayama Sensei. Nakayama Sensei was a genius insofar as coaching is concerned, and this was manifested by the quality of students he produced. Besides Asai Sensei, barrages of other living legends come to mind such as Hirokazu Kanazawa, Keinosuke Enoeda, Masahiko Tanaka, Yoshiharu Osaka, Mikio Yahara, Keigo Abe and so on. What I am trying to adamantly convey here is that Nakayama Sensei was greatest and most influential karate instructor ever.” (Bertel, A. JKA Christchurch Karate Club Newsletter, March 1993. `The Golden Era of JKA Shotokan’).
________
Masatoshi Nakayama Sensei’s definition of Karate - The Way of the Empty Hand.
“Deciding who is the winner and who is the loser is not the ultimate objective. Karate-do is a martial for the development of character through training, so that the karateka can surmount any obstacle, tangible or intangible. Karate-do is an empty-handed art of self-defence in which the arms and legs are systemically trained and an enemy attacking by surprise can be controlled by a demonstration of strength like that of using actual weapons. Karate-do is exercise, through which the karateka masters all body movements by learning to move limbs and torso backward, forward, left and right, up and down, freely and uniformly. The techniques of karate-do are well controlled according to the karateka’s willpower and are directed at the target accurately and spontaneously. The essence of karate techniques is kime. The meaning of kime is an explosive attack to the target using the appropriate technique and maximum power in the shortest time 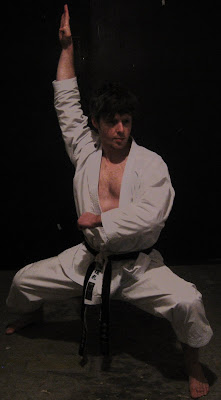 possible… Training transforms parts of the body into weapons to be used freely and effectively. The quality necessary to accomplish this is self-control. To become a victor, one must first overcome his own self.” (Nakayama, M. Japan 1987. `Best Karate Volume 11’. Kodansha International Ltd.).
_______
© André Bertel, New Zealand 2010.
Posted by Andre Bertel at Sunday, August 01, 2010