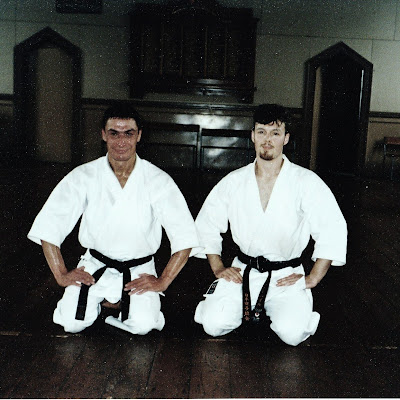 There were two seperate Matsuno JKA (Japan Karate Association) groups in New Zealand throughout the 1990's. One in Auckland under Abe Sensei, and my dojo in Christchurch under JKA Chief Instructor Tetsuhiko Asai. When I returned from Japan in 1993 there were already leadership issues & Asai Sensei didn't want me or my affiliated clubs to merge with the `Abe group'. It was a hard time for me as I was merely a young JKA 4th Dan.
This photo from 1990's was recently given to me and is from this time. It features a young Lyall Stone Sensei, now chief instructor of the CPIT Karate Club, and me without the grey hair, when I was the chief instructor of Asai Sensei's JKA New Zealand/Tetsubukan group.
Honto ni natsukashii desu!

PS - I was asked by members to put up a current photo of Lyall Sensei & me now. This is from instructor training last week and is courtesy of Song Gwang Hoon.