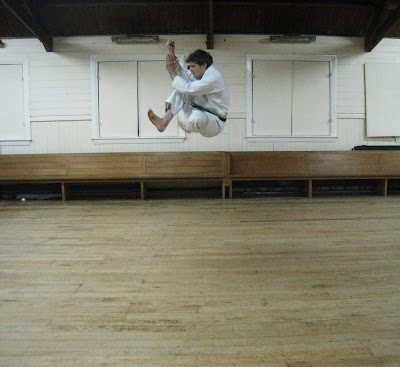 In this photo I am performing the sankaku-tobi (triangle jump) at the end of the first Meikyo kata. This technique when done correctly turns disadvantage into advantage, via a three point aerial change of position. It is not a complicated movement, however, if done correctly will allow one to maximise momentum, body weight and the element of surprise. After perfecting this technique one can utilise many variations such as that depicted below by my late teacher Shuseki-Shihan Asai Tetsuhiko (10th Dan).
__________
The Sankaku-tobi according to Asai Sensei is "the basis of all jumping attacks in dentotekina (traditional) karate-do." I can't tell you how many times he had me practice this waza and variations of it. I have over 40 in my notes... That might not seem like a large number, but imagine going through each `multiple times' with Asai Sensei wildly swinging a 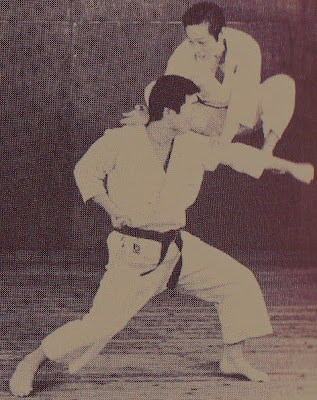 shinai at you! Needless to say, Asai Sensei helped me to refine my tobi-waza.
_________
The sankaku-tobi is a karate technique which is advanced, but its advanced nature comes from its application (and its numerous variations). This point is very important to think about when considering karate-do, as it reveals an unspoken element of the art.