es (electrical power poles) are everywhere in Japan, but here in Christchurch-City New Zealand, it is pretty much, if not all underground wiring. Needless to say, this article is not about electricity but rather `the optimal lines to build up and transfer energy’ in Shotokan karate and all traditional martial arts .
___________
I use the term `power lines’ when teaching, even though they are perhaps better referred to as `power trajectories’. In saying that, I believe the use of the label 'trajectory’ is distracting as it potentially overemphasises the mere pathway of techniques. This is because, regardless of the movement being made, the driving force must be derived from the correct use of koshi (the hips), and shinshuku (compression and expansion). Power lines are therefore a harmonious combination of these two engines and respective trajectories of techniques, which are prerequisite, if one’s karate is to go 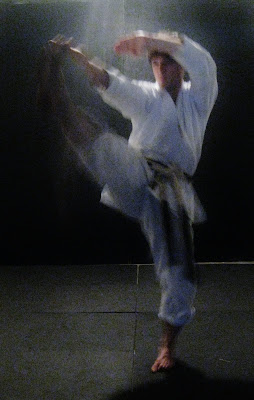 beyond the confounds of a mere sport (a potent martial art of self-protection as opposed to ‘playing’ competition karate). Sports karate intentionally breaks many of the power lines to improve the mere aesthetics of kata or ‘tag’ better in kumite. Whilst, as I’ve said before, “there is nothing wrong with tournaments”, when they promote such kata and kumite, they clearly become counterproductive for the `martial artist'. Another point I'd like to add is that if you are as small and physically weak as I am, your karate must always 'without fail' utilise the more biomechanically superior power lines. If not, your training, no matter how strong and fast you appear to be in the dojo, will never be enough in reality. A case of "pass" in the flight simulator, then crash the plane!
___________ 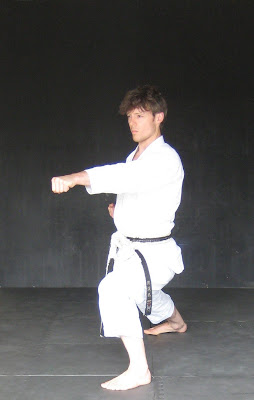 Next time you see power lines when walking down the street or driving past them, think about the power lines of your techniques. Just like electrical wires, efficiency completely depends on them not being broken.
___________
© André Bertel, New Zealand 2011.
Posted by Andre Bertel at Thursday, January 06, 2011