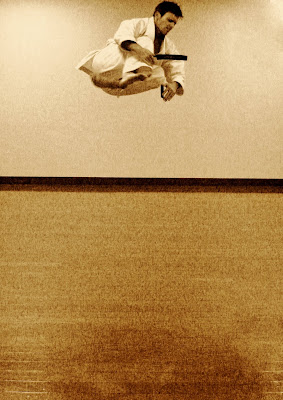 Here are some basic notes on Kihon Ippon Kumite (Fundamental one-step sparring). I could write more, but thought I'd concentrate on issues which I find many karateka fail to do optimally and what Shuseki-Shihan Tetsuhiko Asai Sensei personally taught me. Intentionally I've not put photos of kihon ippon kumite here, but rather of kata. This is because Asai Sensei stressed that kihon ippon kumite is the first method of training where the more unique techniques, and variations of kata, can be applied. However before this practice can be useful the most raw form of kihon ippon kumite must be perfected. The notes here look at this most "basic" form and point towards the application of kata for actual self-defence training. To further simplify this article I've devided the article into two sections. (A) Notes for the ATTACKER; and (B) Notes for the DEFENDER. Osu, André Bertel.
_________
(A) Notes for the Attacker
1. From shizentai (natural position) step back with the right leg into hidari zenkutsu-dachi (left front stance) with hidari gedan-barai (left lower level block). Simultaneously rotate the hips back into a proper `to the limit’ hanmi (half facing position). Announce “jodan” (indicating a prearranged ‘upper level’ attack). Note: when assuming hanmi naturally bend/contract the rear knee so that it is ‘under your hips’ and that the hips remain level.

2. Decisively attack with migi jodan oi-zuki (upper level chasing punch) advancing into migi zenkutsu-dachi (right front stance) thrusting and rotating the hips into shomen (the front facing/square on position). Note: Drive with the rear leg by thrusting the rear heel into the ground and making the leg straight (that is, “use your previously front leg which is deeply bent to propel your hips forward”).

• A special point when attacking with oi-zuki is to perfectly coordinate the completion of the stance (i); punch (ii); hiki-te (iii); rotation and thrust of hips into shomen (iv); drive of the rear leg/supporting leg (v); and breath (vi) simultaneously. With experience alternatively practice the punch with the movement of the body and other variations for actual kumite (to autonomously perfect various applications of timing and body power).

• Kiai sharply on the full extension of your techniques.

A final note I'd like to add about 'attacking' is that "without having correct distancing and targeting to really clobber your training partner you are mutually wasting time" Please remember this!!! 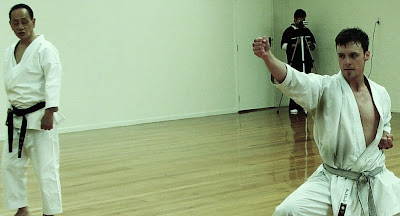 B) Notes for the Defender
1. The defender waits in shizentai for the attack to come, then reacts `after it is launched’ even though it is prearranged (note: pre-emptive defence invalidates the drill). After the attack is on its way the defender drops their weight vertically whilst stepping back with the right leg into hidari zenkutsu-dachi. Concentrate more on dropping as opposed to stepping back so as to maintain an effective ma’ai (distance). Simultaneously twist the hips into a full hanmi – to the limit with hidari jodan age-uke (left upper level rising block). To counterattack thrust the rear leg straight rotating the hips back into shomen with migi gyaku-zuki (right reverse punch). Remember that that hips slightly precede the launch of the punch (so that the legs and waist are the main source of power). Remember: Traditional karate primarily utilises the kahanshin (lower body) as opposed to the johanshin (upper body). 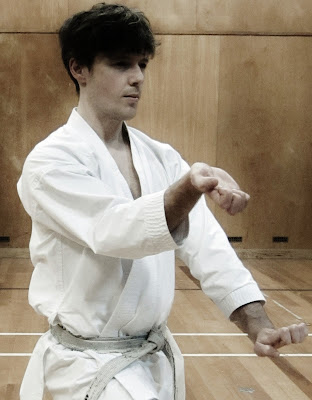 • Kiai on all of your counterattacks.

LEFT & RIGHT!!!
ALWAYS PRACTICE BOTH RIGHT & LEFT ATTACKS FOR BALANCED TRAINING (BOTH ATTACKING & DEFENDING). – My `common sense’ advice in this regard is to practice one’s weaker side more... Whilst this is not rocket science, people usually fail to practice enough on their weaker side.

To conclude I hope that these notes assist you with your Kihon Ippon Kumite training! Obviously, I've just covered the very surface, but like everything, the initial points are what determine the effectiveness of the more advanced practice. 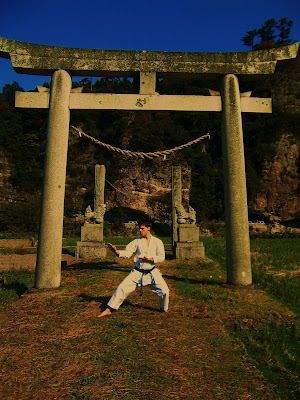