PLEASE NOTE: THIS ARTICLE HAS BEEN REPUBLISHED FROM 2008. Kindest regards, André Bertel. 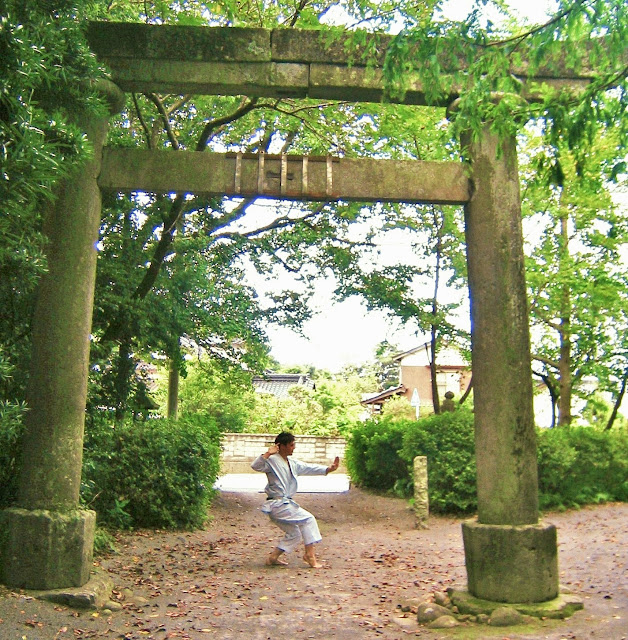 The two kanji (Chinese characters) which form ‘ma’ are a combination of mon (gate) and taiyo (sun). Ma therefore depicts the sun seen through, or between, a gateway. Here in Japan ma is used by the various traditional art forms namely for distance and timing.
________
For example in Shodo (Japanese calligraphy), Kado (flower arrangement), Sado (tea ceremony), and other cultural disciplines, ma is a top priority. For the budoka, control of ma’ai (meeting distance) in a fight outweighs everything else. Why? Because fundamentally all successful evasive maneuvers and attacking techniques are completely dependent on ma.


A great illustration, if you want to really improve your own ‘ma’, is to study the actions of a shodo shihan (Japanese calligraphy master). If you have seen a true master at work you will know how motionless they sit in seiza, how their washi (rice paper) is perfectly situated in relation to their position, how they take time to meticulously cover their brush in ink, then finally.., and with total decisiveness, make each stroke of their brush to form beautiful kanji. Their action is the same as karate kata, some techniques rapid, some increasing or decreasing in speed, others very slow, yet others heavy, light, or a combination of both.
________

Ma in kata
I’ve heard many people asking “how can I move like the elite Japanese karateka?” especially in regards to kata, and the answer is threefold: Firstly ‘precise Japan trained kihon’. Secondly, ‘high repetitions of this exact kihon’. And thirdly, ‘proper use of ma’. The lame excuse of Westerners claiming “Japanese exponents have ‘better' or 'advantaged physiques' for kata" is utter rubbish. However, correct use of ma does require a comprehensive understanding of Japanese culture, via living and training extensively in Japan. It is a 'total experience' not a partial one. Like it or not, this is the reality of practicing a 'Japanese martial art', and is undeniably why Japan still sets ‘the standard’. Karate instructors who haven't made long-term pilgrimages to Japan (or have trained, for many years, under a sensei who has), are simply incapable of teaching ma, and authentic karate in general. Needless to say, correct ma in kata immediately reveals this.


Ma in kumite
Obviously correct use of ma in kumite destroys the adversaries distance and timing, and also allows one’s own attacks and counterattacks to ‘work’. In traditional karate this means that percussive blows will destructively penetrate the target, if not arrested*. However, in sports karate, often fully stretched attacks, which could have never seriously damaged the opponent, are still awarded points (like a game of tag). Scores are allocated to competitors by simply reaching/touching the surface of the target, which clearly illustrates a ‘major void’ between traditional (martial art) karate and sports (game) karate. 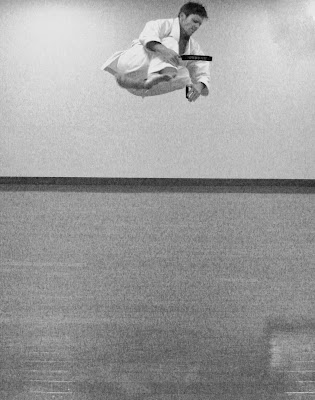 * Correct karate ma’ai, in dojo kumite training, or competition jiyu-kumite, is where the legs/hips and body weight, are fully committed to drive through the target, but the respective attacking limb does not penetrate. Therefore, when impacting on the makiwara, sandbag etc.., or in a real altercation, the karateka simply does the exact same technique(s), but without arresting the striking limb(s). Dojo jiyu-kumite and kyogi-kumite conducted in this 'correct manner' are useful tools for effective martial arts training (note: this was the base of the traditional Shobu Ippon rules).


To conclude I'd like to reiterate the following points: Firstly, ma is the extreme contrast between stillness and movement, ma is rhythm. Rhythm can be fast, slow, poised, accelerating, decelerating and so on. Rhythm determines distancing and timing, success or failure, therefore it determines everything! Secondly, ma highlights the difference between authentic traditional karate (karate as a martial art), and imitation karate (karate played as a sport/game). And lastly, ma is an important part of Japanese culture, something that karateka need to fully understand, and physically express, if they want to execute traditional Japanese karate-do.