Shime means to squeeze or choke. In contrast to the criticality of relaxing, the idea of shime—in the technical sense/technique-wise—seems to create a paradoxical situation. In actuality, this technical paradox elucidates the need for shutting down ‘in one part (or parts of the body)’ through the application of power, whilst dynamically utilising another part (or parts of the body).


Off the top of my head, let’s consider some very basic examples (the most blatant are when leg techniques are applied whilst various kamae (postures), uke (receptions/blocks), tsuki (thrusts/punches) or uchi (strikes) are held motionless. For example, basic mae-geri-keage and yoko-geri-keage practice in heisoku-dachi and with gedan-kakiwake; movements 17 and 20 of Heian Nidan—mae geri keage with chudan uchi uke fixed in place; the three fumikomi in Heian Sandan; movements 14-16 of Heian Godan (especially during `sasho ni migi mikazuki-geri’ where `hidari tekubi hidari sokumen chudan kake uke’ must not move); and throughout the nami-gaeshi in Tekki Shodan when executing the sokumen-uke. Of course, “…shime also occurs without the involvement of leg techniques”; however, pedagogically speaking, the combination of tensing the wakibara whilst delivering ashi-waza is `typically’ the initial stage of learning this fundamental aspect of karate-waza. In doubt, it is probably worth examining (or more likely, for most Shotokan people, re-examining) the works of the late Shuseki-Shihan (Chief Instructor), Nakayama Masatoshi Sensei.
Obviously, without shime in the wakibara, when snapping out kicks, the arms inevitably will flail around or move superfluously (most commonly `pulled down’, `pulled back’ or worse still, both!). And, needless to say, such superfluous action has numerous negative effects. For example: (1.0) telegraphing leg techniques and, consequently, leaving one `more open to being attacked’ whilst kicking; (1.1) creating the inability to immediately attack again `directly’ (that is, make an ‘optimal renzokuwaza/combination attack’); and, (1.2) generally speaking, a lack of self-awareness/self-control. Of course, this list of negatives could go on and on…


It is clear that shime is an important skill not only to make clean kihon and kata, but it is also imperative in kumite and, indeed, valuable in self-defence. To give one reason `why this is the case’: “…if one develops the capacity to autonomously use shime appropriately, in any situation and especially under extreme pressure, their techniques will be direct and their defence will be far more efficient.
As an analogy, imagine `energy flowing through your body like electricity powering an electrical appliance’. Shime would be where you could `shut off the electricity in certain areas, and channel it/express it elsewhere’. That being said, shime inherently goes far beyond this; for example, limiting power or `distributing the power’ differently. One simple illustration of this is the completion of `movement 21’ of Heian Godan (Migi sokumen jodan uchi uke doji ni hidari sokumen gedan barai), which is, of course, mirrored in `movement 23’. In the case of the sokumen gedan barai 70% of power is applied and, thus, only 30% to the sokumen jodan uchi uke). How about the slow and coordinated action of forming migi kokutsu dachi with `hidari haiwan hidari sokumen jodan yoko uke doji ni migi zenwan hitai mae yoko kamae’ (‘movement one’ of Heian Yondan). In this case, shime must be applied to correctly achieve `te-ashi onaji’. In this case, shime is fully applied to the right leg (through tai no shinshuku), whilst the un-weighted left leg glides—ever so slightly above the ground/floor—to its proper position. Some may argue that this is not shime, but here in Japan, such movements are well recognised as being so by senior instructors. Accordingly, this further elucidates the “constant seeking of technical simplification and, thus, ever-greater technical depth”, which leads to ‘autonomously functional budo-karate-technique’.


A simple application to test in jiyu-kumite: Lastly, consider trying this in jiyu kumite. When you attack with gyaku-zuki, apply shime to the wakibara of your lead arm and delay the withdrawal of your kamae (as you punch with your opposite hand: to prolong and maintain a firm cover). If you do this with the correct maai, and place your lead foot as close to your opponents lead foot as possible, “your defence and offence at the moment of attack will be optimal”. Still, as always, it will then come down to your capacity to authentically produce kime. Looking at this exercise, from a different angle, and you will also see that it will also give you `an honest evaluation of the efficacy of your fundamental techniques and kata’. Again, it can never be emphasised enough that, in traditional Budo Karate: kihon, kata and kumite are one.


Taken as a whole, I’d like to offer a word of warning… The main point of shime, like all other aspects of budo karate, is functionality. With this in mind, it transcends `the look’ of techniques. A simple test and understanding, which we always emphasise, is that “…kihon, kata and yakusoku kumite always relate, and lead, to effective jiyu kumite and goshin-jutsu”.  Indeed, when this fails to be the case, the movements of karate cease to be a true martial: irrespective of how strong or impressive they appear. 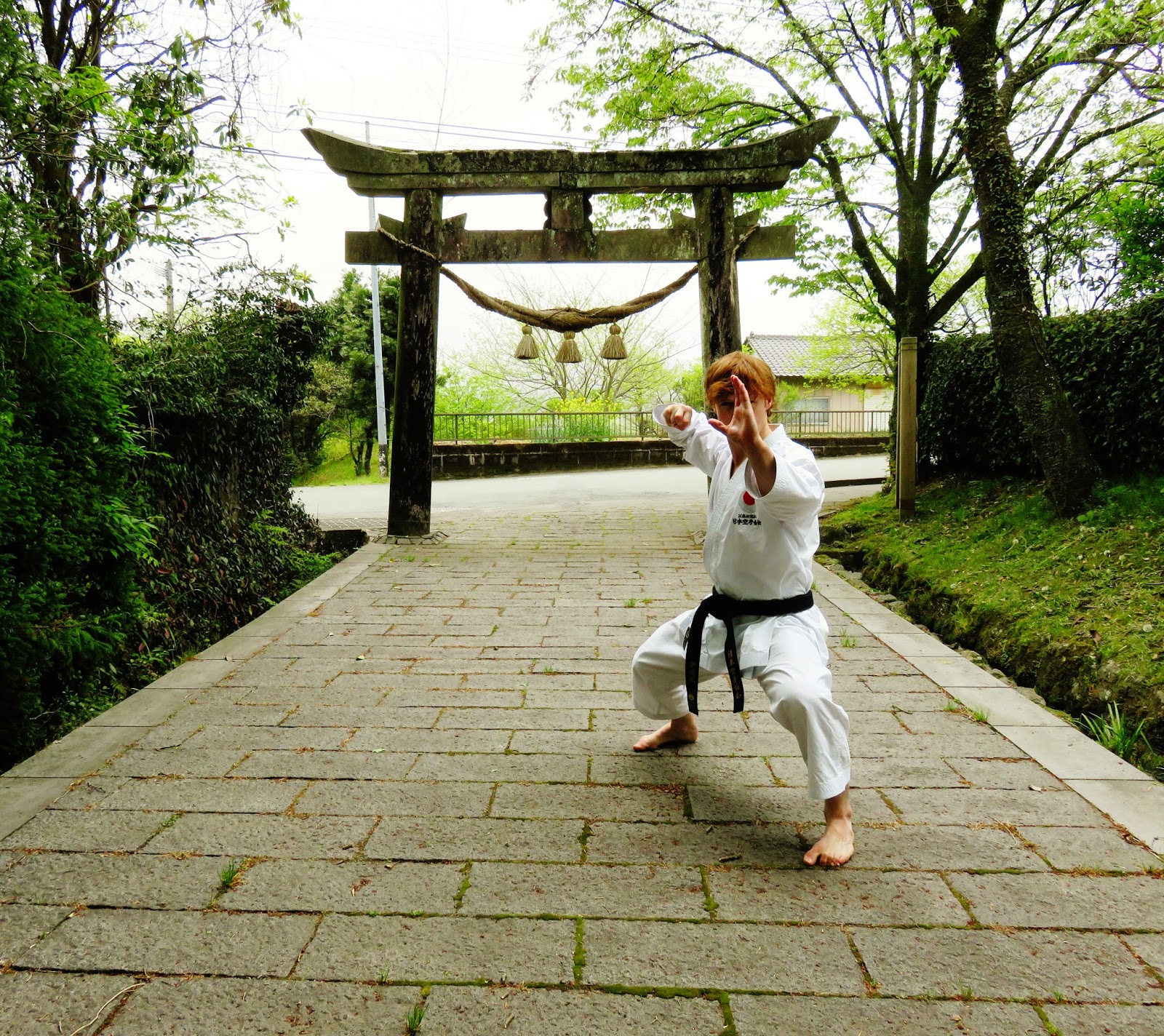 Unambiguously, this only scratches the surface level of shime and fails to address the other essential aspects of shime, such as the constant yet varying energy in the seika tanden, how this relates to ones kokyu (breathing), and so on. That being said, I hope that this short article helps you to address—or readdress—your understanding of shime in Karate-Do; moreover, in the greater context of Budo (Traditional Japanese Martial Arts) in general.
© André Bertel. Aso-shi, Kumamoto. Japan (2015).
Posted by Andre Bertel at Friday, May 01, 2015