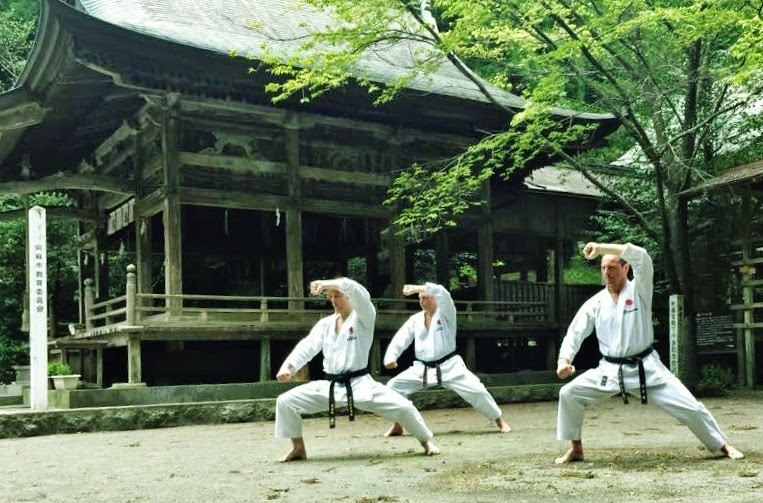 Between April 17th and 19th, three karateka from JKA Germany came for training at my private dojo: Peter Lampe (4th Dan), Frank Kölher (3rd Dan) and Rainer Schöne (1st Kyu). Peter, Frank and Rainer completed two hours of private lessons on Friday evening, three hours on Saturday, and two hours on Sunday; furthermore, informal practice and explanations were given outside of the dojo as well. This included trips to the famous Aso Jinja; Kokuzou Jinja where I regularly self-train; Kumamoto Castle; the grave of the legendary swordsman Musashi Miyamoto; and to Shototakuhirokan (my instructor, Nakamura Masamitsu Shihan’s dojo), which serves as the `Central Kumamoto City Branch of the Japan Karate Association’. Due to their excellent manners, Nakamura Shihan even invited them for tea in the dojo and greatly enjoyed talking to them.


TRAINING: The private lessons I taught covered key points of authentic Budo Karate, as taught here in Japan, and the theme was “All Karate must work towards effectiveness in a non-prearranged context”. That is, techniques/applications ‘for demonstrations sake’—without them leading to effectiveness in a real fight “…are nothing more than showmanship”.  Hence, generally speaking, the lessons were based on “the necessary ingredients needed for traditional budo karate”. While I won’t precisely go into what I taught (as this was/is for Frank, Rainer and Peter) I’ll briefly outline the techniques/points that were covered:


A brief outline of the private lessons for Peter, Frank and Rainer


UKEWAZA: The basic ukewaza of Shotokan with focus on the following points: (a) Position of the elbows; (b) use of tekubi/the wrist; (c) Movement—avoiding `over action’ and correct distance of the ukewaza from the body; (d) projecting the energy forward; and (e) `optimal positioning’.


KERIWAZA: The main focus was mae-geri keage; however, the points given (in relation to the use of energy in tsukiwaza) perfectly applies to all of the other kicks of Karate-Do. Yoko geri kekomi was also briefly shown/detailed in this regard: Here is an overview of we covered: (i) Josokutei/Koshi action; (ii) Kicking forward the rear and high/tight compression; (iii) applying the bodyweight whilst maintaining lateral and vertical posture; (iv) Ratio of speed in hiki-ashi: 30:70; and again, like tsukiwaza and uchiwaza, (v) correct use of power.

CORRECT KUMITE: Applying everything applied and the perfect interrelationship’ between kihon, kumite and kata: the technical essence of Traditional Japanese Budo Karate.  The maxim that “jissen-kumite (actual fighting effectiveness) is the heart of karate technique” was constantly emphasised. In order to achieve this, Gohon Kumite, Kihon Ippon Kumite and ‘Jiyu kumite no uchikomi’ (focusing on hand attacks) were utilised.


To conclude, I’d like to say that Peter, Frank and Rainer are really great guys whom I am honoured to have met through Karate-Do. They train hard and are serious about their personal development of Budo Karate technique. Accordingly, they really did their best (and did very well) to take in what was being taught to them ‘during every second of practice’. And, outside of the dojo, they were a lot of fun to spend time with. It was a wonderful time of karate keiko and camaraderie. Moreover, they not only made a very positive impression on me and my family, but also Nakamura Shihan. We certainly look forward to seeing Peter, Frank and Rainer again in the future here in Japan, not only as karateka but as friends. Osu, André.
© André Bertel. Aso-shi, Kumamoto, Japan (2015).
Posted by Andre Bertel at Tuesday, April 21, 2015

Hi Andre, I tried to leave this comment on your blog, but it didn't work.

I normally don't read your blogs, because I don't know much about karate. But being Peter's wife I was looking forward to reading this blog very much. Peter already told me on the phone how exciting and absolutely amazing your training was.
I think your training sessions have helped them develop their karate a lot and I'm sure they will never forget what you taught them. Your hospitality and openness impress me very much and show me that karate is more than just martial arts!
Thank you for making this Japan trip an unforgettable experience for my three friends!