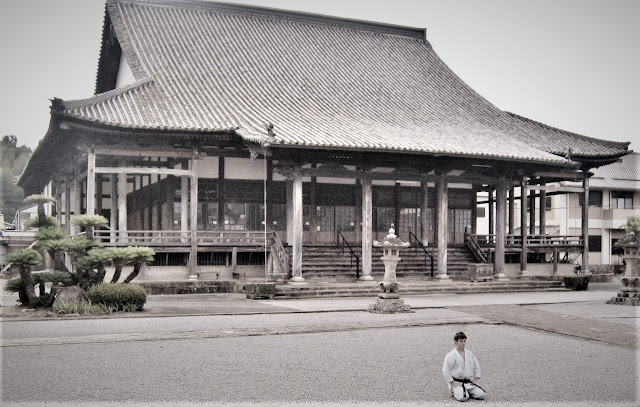 My training yesterday was focused on endurance, leg strength and variations of 転身 (tenshin /rotation). I won’t go into the endurance and leg strengthening today as it was simply a five kilometer run and squat-work; however, today, I’d like to talk a little about the tenshin.

In particular, I utilized one of our fundamental kata, 常行四勢 (Joko Yonsei) which is, in fact, a technical extension of the more basic 順路四段 (Junro Yondan).

Rather, than delving into kata, let me explain a little bit about the underlying kihon of tenshin—as taught to me directly from Asai Tetsuhiko Sensei.

2. A major difference between—forward rotation and rearward rotation—‘(a) and (b)’ (in the aforementioned point) is the part of the foot on which one rotates. Shotokan-Ryu, generally uses kakato (the heel) when spinning forward and josokutei (the ball of the foot) when spinning rearward/away. Kakato chushin is a  foundational training method, unique to Shotokan. This practice masters the correct use of one’s kinetic chain in order to generate maximum power. Please note here, do not get confused when it comes to certain turns in kata. A good example is the numerous 270 turns in the Heian kata and all other kata. These use kakato chushin to maximize ground power.

3. There are of course exceptions to this rule,  however, ‘generally’ this is optimal in kihon  for mastering forward driving of power for attack; also, increasing distance between one and their opponent when evading.

4. Added to this point is the changing position of the sasae-ashi (pilar leg) and, indeed, changing which leg is the sasae-ashi. On top of this there are obviously various degrees of rotation and, accordingly, a vast amount of variations is possible. In this regard, we can see the advantage of practicing the additional kihon-gata such as Junro and Joko; furthermore, the numerous advanced koten-gata.

5. Just to avoid any possibility of confusion, I’ll briefly state the obvious here: “… don’t be confused by moving forward with a circular technique such as chudan teisho uke in Jion or mawashi-geri. These actions are not tenshin and, thus, one moves by pivoting on the ball of the foot of the sasae-ashi”. Of course, these are just a couple of examples.


Let’s now consider the actual action in tenshin and how power is produced. Consider the actions of a forward moving 360 degree spin followed by reverse spin. For example, kaiten shinagara yoko enpi uchi (kiba dachi) kara mawari nagara sagatte gedan barai (zenkutsu dachi). It’s not simply spinning, it is moving your center forward then back with the seichusen changing accordingly to use the optimal point of rotation. There is also the pushing forward of the knee of the sasae ashi to employ juryoku (gravity) in the action. As Asai Sensei always told me "use natural energy". Yes, a simple statement, but physically requires constant correction from an excellent coach and, indeed, self correction in one's own self practice time to deeply ingrain in the subconscious mind.

Orthodox waza with tenshin: usually spinning and swinging around is not the general methodology in tenshin. Yes, it can be, but that is the exception: not the norm. The main/usual method is centralizing the legs in the rotation—“becoming like a spinning top”—then driving forward into a tachikata: essentially ‘circle and point’. In sum, it is the combination of rotation and propulsion. A good image is that of an Olympic shot put or hammer thrower. Basically,  “…a build of off momentum by rotating to gain centrifugal force— whilst  moving into a contracted position—then seamlessly driving straight towards the proposed target”.

To consider, the defensive actions of tenshin please allow me to use a very simple and obvious example. Let’s consider movements three and four of Junro Nidan kata. This is a 360 degree attack with migi sokumen kentsui uchimawashi uchi (moving into kiba dachi) followed reverse spinning 360 degrees with hidari gedan barai (into hidari zenkutsu dachi). This unambiguously illustrates the point above: about using the heel when spinning to attack—to go forward, and the ball of the foot to defend—to escape. While I won’t delve into this here, such an escaping action (as in movement four of Junro Nidan) it also functions extremely well to apply katame-waza (locking techniques) as they help to extend the opponents limbs. Needless to say, the combination of the an opponents arm being stretched out long, and a gedan barai, leaves little to the imagination: not to mention the power generated in the centrifugal momentum of the reverse rotation and relaxed dropping of ones center with the descension of the 'blocking' arm.

Conclusive remarks: Some people question about the practicality of tenshin, in particular, the folly of turning your back to one’s opponent. I agree that usually this is the case, however, once you have control of one your opponents limbs, rotation can be extremely effective. This is certainly the case for people when they have a strength disadvantage.

Also, what is often overlooked, is that the tenshin waza are most commonly applied against attacks coming from your side or rear. Spinning attacks forward are more of a training tool than a self defense technique.


Lastly, and certainly not least, the training of tenshin greatly increases balance, increases the physical understanding of how to make power, demands relaxation which progressively improves one’s use of their joints and muscles, and—simultaneously (amazingly) enhances our trusty core linear foundational techniques.

My advice... Please study tenshin with diligence and properly! Needless to say, this aspect is important for me to share with the karate world from Asai Sensei.

I wish everyone the very best in this difficult time. My hope is that everyone remains healthy and positive. Greetings and a big “Osu” from sakura covered Oita City, Japan. 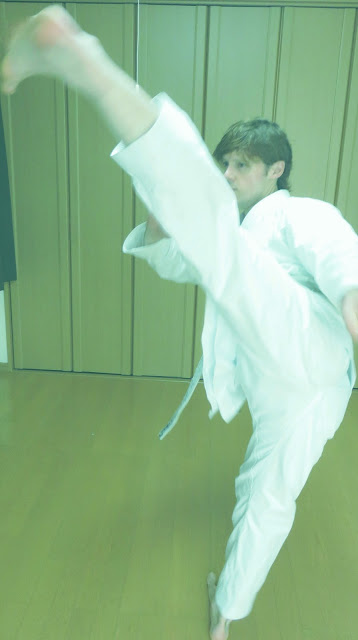