Today I thought to write a base article on 三本連突き (SANBON REN-ZUKI). This is from the perspective of my seniors in Japan, past and present, and the INTERNATIONAL KARATE SHOTOKAN.
Sanbon ren-zuki is the combination of a ‘drive in’ with jodan oi-zuki followed by two consecutive chudan punches (chudan gyaku-zuki and chudan maete-zuki). The weapon applied, in all three of these linear tsukiwaza, is seiken which comprises of the knuckles of the index and middle fingers. The targets for jodan is the jinchu  and, for chudan, the suigetsu; furthermore, the aim is through the target. A saying here in Japan is that ‘one should punch in a way in which you could break a couple of hard boards’.

Generally speaking, the power of the initial oi-zuki is derived from the ‘large scale transfer of weight’ and ‘drive of pilar leg’; the ‘moving of the center’; the ‘driving of the hips into shomen’; and “…the harmonious connectivity between the lower and upper body, quick hand speed through snap/relaxation, and a strong and full hikite”.

The gyaku-zuki in this position utilized a very slight unlocking of the hip then, to execute the third tsuki, a reverse rotation back into shomen. These two tsuki are naturally not as strong as the first, as they are stationary; therefore, one must maximize ‘ground power’ and the correct rotational axis for both of them. The gyaku-zuki rotates on the lead hip/shoulder axis and the drive of the rear hip; whereas, the maete-zuki rotates on the rear hip/shoulder axis. The oi-zuki and gyaku-zuki both utilize the rear heel. Contrastingly, the maete-zuki uses the front heel.

All three punches when training solo have the inside edge of the extended fist on the seichusen; moreover, to reach this position each time, the trajectory of each tsuki must be as direct as possible. Think of three thrusts with a yari (spear). This has two dimensions of understanding. The first is safety; that is maximizing reach/distance in relation to your opponent(s). The second, and more important, in actual fighting (for efficacy), is ‘target penetration; thus, the extension of the technique is not primarily to reach but 'penetrate the target' for optimum percussive effect.

To achieve this directness—in basic karate training—one should slide/graze the wrists, elbows and forearms against the sides of the body; furthermore, instead of focusing on twisting the wrist on the completion of each waza, the focus should be on twisting the forearms as solid units.

When pulling back the arm for each hikite the fist should be facing upward for as long as possible. Conversely, when extending the arm to hit, keep the back of the fist facing downward for as long as possible. In this sense, the pulling back of the fist is concentrated on the stronger part of the hand (the thumb side, whereas the punching hand concentrates on the weaker—small finger—side. There is a grappling variation to this, but I will talk about that in another post.

Insofar as the legs go, the main power comes from the sasae-ashi (pillar leg) which is initially the lead bent leg in zenkutsu-dachi but becomes the rear leg; that is, ‘in kihon’ one shouldn’t drive with the initial rear leg and that leads to punching in two actions: including the breaking of posture. I always explain this via ‘using zenkutsu-dachi correctly’, as opposed to the arm actions. The point here is that you want to attack your opponent with your stance. The aim is to use the contracted bent front knee, to the maximum, by initially pulling with it then expanding it (straightening) to drive the hips forward. When this is done correctly with the support foot set and, without a change in height, tai no shinshuku can be properly applied to produce a swift and powerful tsuki. Essentially, Osaka Sensei explains that the rear heel, through the torso, to the fist become "...one leg arm".

The reverse rotation into shomen combined with kakato-chushin (centering on the heel and sokuto of the rear foot) helps to give oi-zuki a significant increase in impact power.

Another important aspect of sanbon-zuki is timing. The basic timing is just the 'waza no kankyu' (rhythm of technique). This is one; two—three.  However, many get lost when it comes to the second and third punches. In particular, the gyaku-zuki is not fully committed. This is wrong. All three punches must have kime (decisiveness) and seek ‘ippon’. No, not a point but to finish off one’s hypothetical opponent. Of course, in actuality, ichigeki-hissatsu is to maximize your potential as opposed to merely seek mediocrity. This meaning should be understood and put into practice each time one trains, if one is serious about their karate. When karate technique is practiced as a form of 'jutsu', ichigakki-hissatsu is always the ultimate aim of technique.

The second aspect of timing is more advanced. Let me take a step back for a moment from sanbon-zuki. As I have already stated, I teach zenkutsu-dachi as an attack, which came from my senior here in Japan. Let's think about it, of course, zenkutsu-dachi is certainly not a normal fighting position but, rather, the extended point of a technique. However, that is generally speaking. There are in fact, three main forms of timing. The first is the basic one we use in Shotokan. Te-ashi onaji (the hands and feet finish together). The second is that we move/transition, then fire the technique, which is common in Okinawa. The third, is that hands precede completion of the stance… This third version is the more advanced and superior version; nevertheless, it requires training in the first methodology and, is better applied, with understanding of the second (in application). The first method is a basic training technique, a guide if you will. The second, again generally speaking, is for short movements i.e. – yoriashi (also to cause the opponent to mistime their defenses or interfere with their attacking rhythm). And the third method, combines maximum hand speed (velocity) and the maximum amount of your weight behind the technique (mass).

Obviously the two middle level punches do not utilize this third methodology but, rather by default, utilize the second method as they are stationary waza (furthermore, close range and smaller scale, which is further verifies my comments in regard to this methodology).

That brings me to breathing in sanbon ren-zuki… I was taught by Asai Tetsuhiko Sensei to breath naturally. In this way, due to lack of real clarity, it is better for me to say ‘how not to breath’. Firstly and most obviously, do not hold your breath. Inhale through your nose and exhale out of your mouth. Secondly, do not exhale all of your breath out. Unless recovering from exhaustion or from being ‘winded’ from a body blow or fall, always keep about 10 percent of oxygen in your tanden. Thirdly, when exhaling for techniques, it is ok to make a sound; that being said, superior skill is to not be audible. While I have repeated this story many times, I will say it again... Once when sitting next to Asai Sensei during a grading he stood up and stated (to one of the Sandan candidates) “You are Darth Vadar!” This hilarious comment occurred after the guy performed Hangetsu with Sanchin style breathing. In sum, use your exhalations to move more explosively and recover quicker, but breath naturally!

Don’t forget, when practicing sanbon ren-zuki to also do it 'stationary in various stances', 'moving in different stances' and, most importantly, ‘hitting things with it’ and using it in jiyu-kumite. When doing this try to apply the aforementioned points to increase your impact power, speed, timing, accuracy and awareness. Like with all other techniques and renzokuwaza, only then will the movements and fine details have meaning. Train to be functional. Our group IKS (International Karate Shotokan) is highly technical, however, "...the main point of technique is always for optimal application".

I could go on about Sanbon ren-zuki, but I will leave it there for today. I think this brief article reasonably outlines why we assess this combination for all three brown belt grades (Sankyu, Nikyu and Ikkyu); also, both of the IKS Dan Examinations which feature kihon independent from the other testing elements. Overall, to conclude “…Sanbon ren-zuki is a representative technique combining linear tsukiwaza and utilizing the core/foundational methodologies of power. From this perspective it provides valuable on-going training, and, equally important, a valuable tool for self-evaluation and external evaluations (in the assessment of others)”.

I hope there was something useful in this basic article. Greetings from beautiful Oita City, Kyushu. 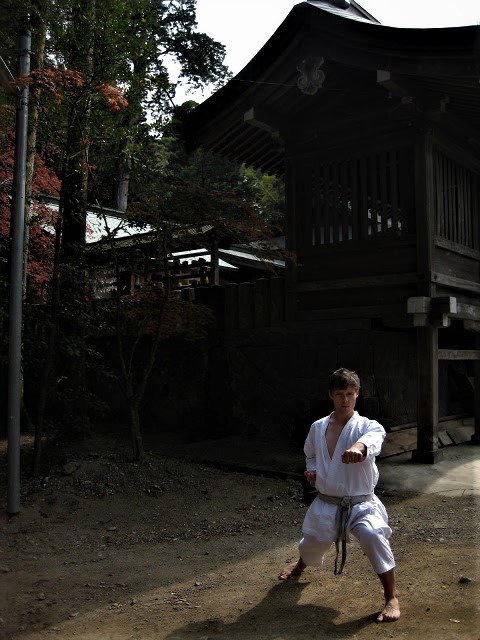