10 YEAR MEMORIAL OF THE CHRISTCHURCH EARTHQUAKE: OUR EXPERIENCE 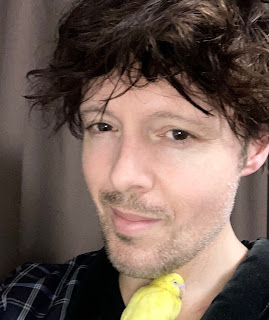 Here I am tonight nursing a baby budgie, yet, ten years ago tomorrow, my wife Mizuho and I almost died from a natural disaster. Tomorrow is an important day for the people of Christchurch and Aotearoa New Zealand. So I thought I'd publicly share what happened to us today, a day prior to the ten year anniversary of the February 22nd Earthquake.

We were on our way to sign up for an apartment in Central Christchurch. In late 2010 we had returned to New Zealand from Japan. It was for my on-going study at the University of Canterbury.

Finally, after an extremely odd loss of direction to get to the estate agency, we were driving up Lichfield Street on the right track. In front of us were two red commuter buses. Both of the buses were moving particularly slowly, so I suddenly did something out of the ordinary, I really accelerated and bypassed the buses, then turned right into Colombo Street. Mizuho actually told me off because she was shocked at my sudden and uncharacteristic burst of speed. However, to my frustration, we were stopped at the Tuam Street intersection: via a red light. I was really worried about missing out on the new apartment.

Looking up into the rear-view mirror I could see one of the buses slowly roll up directly behind our car. The bus was there, directly behind us, for at least a few seconds before a thunderous roar occurred.

Our car bounced, and Mizuho and I literally saw the buildings begin to collapse. I pressed onto the accelerator as hard as I could to centralize our car in the middle of the intersection. I didn't have a chance to see if we'd collide with a car from the side. I just reacted in fear. I could have caused my wife to die in that moment alone.

My only thinking was 'this is it?'. The shaking was too fast, too violent. I didn’t see it, but Mizuho saw people disappear in the moments I desperately accelerated. Suddenly all vision was lost from all the dust. If you saw the images of September 11th, that was what we saw. A blanket of dust and no vision for a brief period. The only sound was what we believe to be security sirens and breaking infrastructure. Smashing glass. Other than that, there were no other sounds. While our car was damaged by falling bricks and parts of collapsed masonry, we suffered nothing but bruises from violence of the shakes. We were literally smashed into the car by it. Mizuho had several severe bruises.

After that, in shock, we were surrounded by horror. There were many seriously injured and dead around us.

I wont talk about this anymore, except to say that this happened ten years ago tomorrow. Needless to say, we will never forget it.

We want to honor those who passed away, lost loved ones, and those who suffered life changing injuries.

Ten years on, if one or both of us had been taken then, we would not have our beautiful daughter now and, indeed, so many life experiences since then. We often reflect on those who died that day and can only feel deep empathy for them and their loved ones. Beautiful life and time taken away.

Mizuho and I will remember that day for the rest of our lives. Our love, thoughts and prayers are with you all at this time.