A brief comparing and contrasting of the three Meikyo kata

As you will know from my last article on here, and from my posts in past years, I practice three forms of 明鏡 (Meikyo): Meikyo, Meikyo Nidan and Meikyo Sandan. Today, based on several requests, I decided to briefly compare and contrast them. Furthermore, I’ll include some other information I learned from Asai Tetsuhiko Sensei and other masters. Taken as whole, I hope that this post is both enlightening and perhaps even motivational for your training. Before I go on, my reason for writing this and the last post, is that I’ve been doing a lot of the three Meikyo recently; and consequently (in addition to requests for this follow-up article), I felt inspired to write this and the last post. So let’s get on with it!

This kata is practiced in standard JKA style Shotokan and has 33 movements with its one kiai at the high point of the Sankaku-tobi with migi hiji sasho-uchi (movement 32). This is the only jump in the Meikyo series. Besides this a highlight is the practice of ryosho bo-uke and bo-oshikomi. Warning! Please don't try this against someone wielding a bo seriously at you!!! The name is just a name. This is only the basic 'bunkai' to 'learn the movements/positions'. It's easy to do that with a bo in the hands. The 'oyo' or actual application is an arm lock/joint dislocation technique). Another standout point of the first Meikyo is the ‘reflective enbusen’ which is where it’s name was derived. It sum this kata is a synthesis of the three Itosu Rohai by Funakoshi Gichin Sensei and also a simplified version. As a side note it was the last kata in the ‘Best Karate’ series and was performed by my instructor Asai Tetsuhiko. I was told that this was because it was Nakayama Masatoshi Sensei’s ‘tokui-gata’. Last but not least, it was the kata that Asai Sensei randomly called when I did my Godan exam nearly 20 years ago; so consequently, it has heightened significance for me because of that memory.

This kata is Matsumura Rohai, which is the longest in the series with 44 movements. The two kiai are on movement 16 (hidari tateken chudan oi-zuki) and movement 42 (migi mikazuki-geri, sasho-ate). A standout point is the slow use of moving into sagiashi-dachi making simultaneous hidari shuto jodan-uke and migi shuto gedan-uke. Another highlight is transferring from hidari shuto chudan-uke into hidari jodan yoko-nukite followed by mikazuki-geri flowing through the target via tenshin. Overall, this kata has special relevance as it was the first kata that Asai Sensei taught, outside of the ‘standard JKA kata’; accordingly, he specifically used it as a bridge for Shotokan karateka to think outside the box. To add some personal importance for me, this kata blew my mind when I found out about it! By 1993 I was already well versed in all 26 of the 'standard Japan Karate Association kata'. Finding out that there was more, and Asai Sensei was now teaching this knowledge, really amped up my motivation. That motivation still lives in me now, and was boosted via Meikyo Nidan.

Meikyo Sandan, like Nidan, is an older form than the ‘synthesized Itosu Rohai’ (Meikyo) of Funakoshi Sensei. I will reveal this in the future as the history will better enhance my teaching of it; moreover, at least three other kata called ‘Meikyo Sandan’ have come into existence in recent years: even though they have no resemblance or applications similar to Meikyo Sandan. With 40 movements this kata is elegant and strong. The two kiai are found on movement 26 (migi seiken gedan gyaku-zuki) and movement 36 (migi mikazuki-geri, sasho-ate), which is also found in Nidan but with a more subtle ‘sonomama’ hidari shuto chudan-uke/kamae throughout. Excluding this kick, there are five balances on one leg in Meikyo Sandan. Three are sagiashi-dachi (in contrast with Nidan these are fast and with the foot hooked behind the sasae-ashi like Gankaku), one is ashi soto-uke (which is also quick) and one is a slow mae hiza-geri. This is said to resemble a heron hunting in a river. The great point of this kata is that it is technically mature formal exercise. It wasn't exactly my 'cup of tea' in my 20s. I was more of a 'Unsu, Hushu, Raiko kind of guy'; however, I found great depth in this kata and from my 30s. Indeed, this was not only the case with Meikyo Sandan, but this kata is typically representative of those advances in my understanding and increases in technical skill. Still, so much more to learn. Osu!

I’d like to add some comments to conclude. Firstly, unless you count mae hiza-geri (movement 33 in Sandan) the only kick in the three Meikyo forms is migi mikazuki-geri. In the first kata from hidari kentsui (tetsui) sokumen uchimawashi-uchi in kiba-dachi, the chudan mikazuki-geri connects with the left open hand (sasho-ate) then one steps rearward into migi kokutsu-dachi with ryoken gedan kakiwake. However, in Meikyo Nidan and Meikyo Sandan (after sasho-ate) one spins through and steps rearward. Another point I’d like to mention is that all three Meikyo greatly utilize 重力 (juryoku/gravity). This is a focus spanning all karate-waza, nevertheless, these three kata really home in on this point for power generation. I think I will conclude on this note. 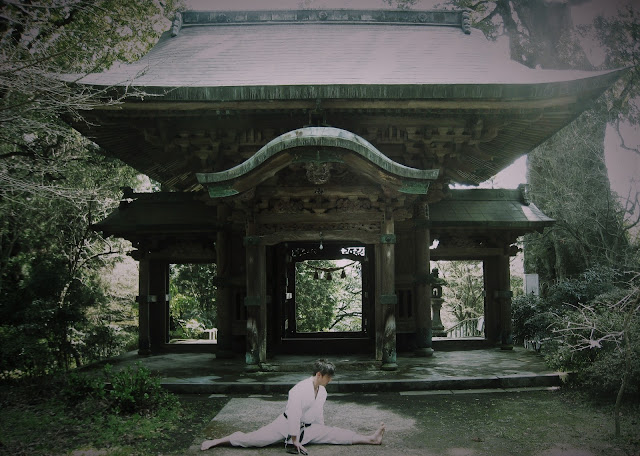