Generally, speaking there are two major forms of 引手 (hikite), the first is the ‘linear hikite’—which is used to initiate linear waza; in particular, tsukiwaza. The second is the ‘arced hikite’—which is often employed with circular waza such as ukewaza and uchiwaza. However, this goes beyond 'how to'; that is 'why?' Functionality, was the actual origin of HIKITE. Let me explain generically from what I have been taught over the years, here in Japan, by the very best of the best.

Indeed, the use of hikite is a case-by-case situation which is actually dictated by application as opposed to form. Accordingly, there are a couple of important points that we use in Budo Karate. Firstly, as I have explained in great detail in the past, the main purpose of hikite is as follows:

“Hikite is to achieve ‘ichigeki-hissatsu’, that is to finish with a single blow. The hikite’s role in achieving this is threefold. Firstly, to pull in the opponent to create a ‘collision effect’ which greatly intensifies the impact of the respective blow. Secondly, it ‘keeps’ the opponent or ‘sets’ them which not only makes it harder for them to escape, but also greatly reduces the fine motor skills required to impact in the unpredictability and intensity of a real fight. Thirdly, it functions to off-balance and ‘blindside’ the opponent.”

It is important to note here that the hikite is preceded by an iriguchi-waza (an entrance technique) so that an opening is created. For those unfamiliar, there are three of these from the origins of karate: an attack to the eyes, throat or testicles.

Beyond this point of initiation, the key aspect is INSTICTIVELY using the correct hikite in any given moment. This is actually 'an easy skill', even for intermediate level karate exponents (if it is ALWAYS TAUGHT AND FOLLOWED IN DAILY PRACTICE). It also shows "...if an instructor knows what they are doing or not". Interestingly, many Japanese instructors now fall in this ‘not knowing’ category. This is because they only know hikite in its basic form for 'opposite side power generation. While they do 'cerebrally know' the application form of hikite, "...it is mostly a novelty", which they occasionally 'show' their students (and from 'an almost academic standpoint'). Inevitably, based on the mainstream focus of 'fist/foot kendo', such original and highly effective knowledge will only further dissolve into obscurity.

Underpinning these applicative aspects, as I have just said, we have the ‘basic’ of hikite, which is its foundational function of generating power with the opposite hand/arm. This aspect is not only related to this but, also, the central division and interconnection of the muscular-skeletal system.

The “breaking of the upper body into five sections”, with “…each section being used together, separately, in different combinations and varying orders” is at the heart of how experts move at different level (the two Sensei who personally taught me in these regards were Asai Sensei and, still now, Osaka Sensei). The initiation of all of this, outside of the psychological/cerebral aspects, and positioning/movement IS THE HIKITE.

On the subject of the seichusen and my past writings (on the three ‘tanden’) one must understand and properly utilize six points. These are as follows from the aforementioned two masters:

The three planes of motion:

The three axis’s of rotation:

(2) the MEDIOLATERAL AXIS; and

Needless to say, the hikite plays a particularly import important role when utilizing these planes and axis’s; however, outside of Budo Karate, what often gets 'left out of the equation' is that the hikite also 'negatively interferes' with the opponent’s planes and corresponding axis’s. This was Asai Sensei's specialty and was one of the underpinnings of his specialization in TENSHIN.

What I am elucidating here is that the hikite is not only to do with one’s own attack, but also disrupting the opponent or opponents. Without this full equation it is impossible to fully utilize hikite in its originally designed/purposed manner; thus, invalidating its functionality in the real world. When you understand this, you will understand the training of TENSHIN and why I teach it so much,

In context of tenshin, the ironic thing about this is that "...if one understands and practices their hikite in this way, their hikite is given ‘more life’." Besides application itself, performance of the solo fundamentals and kata are also significantly enhanced. Therefore, even for those karateka who do not practice Budo Karate—that is, solely focus on sports karate—they too, will benefit from doing hikite correctly! The problem is that such people will probably never visit this page!!Osu, André 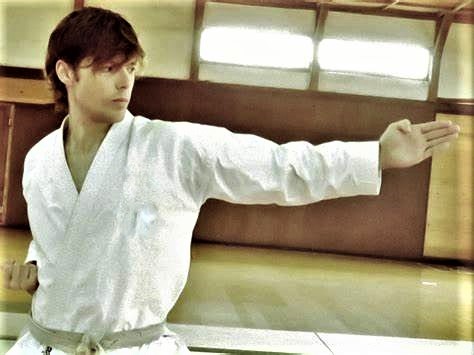