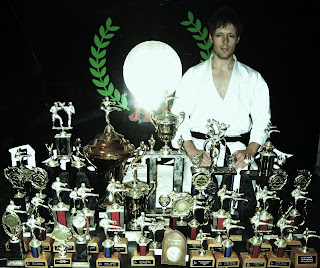 I won a lot of karate tournaments when I was younger, and I lost in some as well. I have had days when I've entered and won every bout by ippon, without conceding any points whatsoever. Likewise I have entered and been completely wiped out. Am I a karate champion? Well, to be honest, I‘m still really not sure what a karate champion actually is… But I know what being a 'champion' is, even via some experiences in competition...

Some challenging bouts I had…

Entering injured: In 1999 I entered a competition in Christchurch representing Canterbury to fight the New Zealand All-Universities Team. I was coaxed into entering with two freshly broken ribs (I was not supposed to be doing any sports for a while). I was also pushed to do kata… My Unsu was terrible, and needless to say in kumite, I was completely trashed! 6-0 under the previous WKF-style Sanbon Shobu rules. However, credit to my rather large opponent who capitalized on my injuries.

Entering after food poisoning: In the last tournament which I fought in, the 2005 KANZ (Karate Association of New Zealand) National Championships in Palmerston North, I got food poisoning two nights prior to the event and lost several kilograms as a result of severe vomiting and diarrhea (thanks to a Wellington pie shop...). Regardless, I decided to enter, and ending up winning the event. My tactic, due to my lack of strength was simply to attack immediately, no waiting around, no special tactics – just go in! I was white as a ghost and super thin, so my theory is that I freaked my opponents out...
___________

As I’ve said before, there is nothing wrong with karate competitions. However, we should avoid getting carried away by competition success, or failure for that matter. Success is not as much about winning or losing, but rather about one’s spirit and attitude. In both of the above situations, I won! Because I dug in against the odds… Serious injury and sickness. One example resulted in failure, the other in success. To me, both were successes! In many cases, I have won competition titles convincingly and achieved nothing in the long-term sense.
__________
To be frank, due to the subjectivity of karate competitions, I don't really believe in karate champion's, but I do believe in the 'spirit of a champion'. A real champion never gives up, especially when the odds are against them, win or lose. I wish I could provide more ex 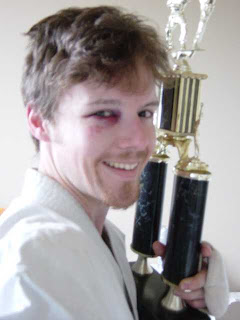 amples of challenging bouts, however, most of the time I was in perfect health. Looking back now, the above two situations mean more to me than all of those 'good days' I had. My advice to all of you, who still compete in tournaments, is quite simply "Go for it!" Enjoy and be free from the concerns of winning and losing. Neither matters, only your perception and spirit.
OSU!
© André Bertel, Japan (2009).
Posted by Andre Bertel at Friday, August 21, 2009