Special training for Bryan Dukas and Paul Kallender in Kyushu

Some of you may have read my June 2009 post on Mike Dukas Shihan (please click on the following link to access it: http://andrebertel.blogspot.com/2009/06/great-interview-with-mike-dukas-shihan.html). Well, on Monday the 8th of March, Bryan Dukas Sensei (Yondan) and Paul Kallender (Shodan) travelled all the way from Tokyo to Nakatsu to meet up, and study Asai style Shotokan Karate at my dojo.
＿＿＿＿＿

Upon arrival at Kitakyushu airport straight away I spotted my good friend Paul, and then Bryan (whom I've never met before). From the moment of meeting Bryan I knew that we’d get along very well, my first impression was very positive, truly a very modest and knowledgeable karateka. Great guy! After the fairly long drive back to Nakatsu, we immediately travelled to the Renshinkan Dojo for training.

Bryan and Paul wanted to study Tetsuhiko 'Asai Style' Shotokan Karate, so I ran them through several of Sensei's introductory kihon exercises, and methods of power generation, which somewhat differ from that of the KWF/Yahara Karate. We also covered Kakuyoku-shodan and nidan kata several times (also Kakuyoku-sandan a little). During our warm up we briefly ran through Unsu (Bryan's tokui kata), Bassai-dai (Paul's tokui kata), Suishu (Mizu no te) requested by Bryan as he learned it from Asai Sensei in the 90's, Roshu (Nami no te) and Kaminari-arashi kata.
_______

Kata applications for jissen-kumite: Another thing I quickly injected into the lessons were some of Asai Sensei's bunkai/oyo-jutsu of several so-called "redundant Shotokan kata movements". With limited time I only gave examples from the last movement (repeated twice) of Jion, Manji uke (featured in Heian-godan, Bassai-dai, Kanku-dai, Jion etc), and ura zuki in the three Tekki. Bryan and Paul were clearly impressed by these applications, just as I was, when Asai Sensei first taught them to me. These, according to Sensei, were the original meanings, so I hope this small taste of Asai-ryuha Shotokan bunkai was enlightening. I only wish we had more time to cover all of the applications and to train them via oyo-kumite.
_______

The 'Gammy Leg' & relaxed movement: I was very pleased that Paul, even though he is still suffering with his ‘gammy leg’ still got into his dogi and trained. With more relaxed movement I was greatly impressed by his flow of power. So I'm sure, with practice on this and strict attention to shisei (posture), his karate will readily get to nidan standard.

South African or Nihonjin? Bryan’s karate is literally world class, definitely the best non-Japanese karateka I’ve seen for several years. He is a world level competitor and numerous times South African National Champion (JKA, KWF and WKF All-styles), but better than this, is the fact his karate is 100% traditional (pure budo/martial arts karate). So I was very pleased to teach him some Asai-ryuha, and hope that he introduces, what we covered, to South Africa. He is the first South African karateka to properly study Asai Sensei's technique in a session 'technically similar' to socho-geiko (special 'morning training'). I was thrilled to pass on some of Tetsuhiko Asai Sensei's karate to him, as his karate put a smile on my face.
_______

My advice to anyone in South Africa, is to go and study karate from Bryan Dukas Sensei, he has much to offer anyone, who is serious about learning traditional Shotokan. Unlike most gaikokujin karateka, Bryan truly does karate the Japanese way, and at a level rarely seen outside of the very best clubs, here in Japan.
_______

Thanks Paul and Bryan for coming down, it was a pleasure to host you here in Oita Prefecture, and an honor to be friends with you both through Karate-Do. Mizuho and I hope you had a great time, and that you benefitted from the karate keiko here.
OSU! 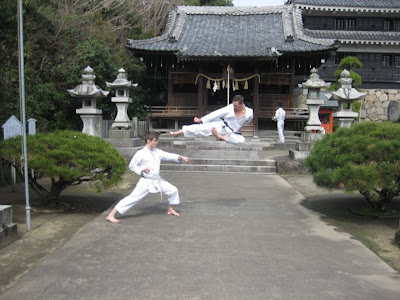