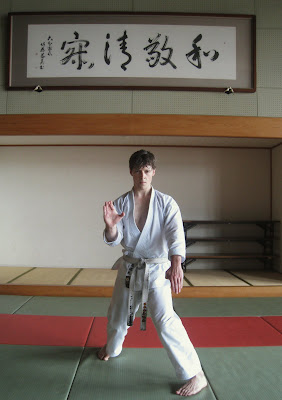 My late karate teacher Tetsuhiko Asai Sensei referred to Bassai (Dai), Kanku (Dai), Empi, Jion, Jitte, Hangetsu and Gankaku as "The Seven Core Shotokan Kata".
_______
Today rather than also talking about "The Big Four", which I have done numerous times before, I'd like to comment on Hangetsu, Jitte and Gankaku, which were covered extensively in a special practice today. I will also add some pointers on these three kata I learned from Asai Sensei.
_______

Hangetsu (Half Moon): The original name of the kata is Seishan, however like many other kata, it was renamed by Funakoshi Sensei in mainland Nihongo to describe its footwork and techniques which are predominantly circular. Hangetsu masters the coordination of technique, leg movements and breathing, and has many excellent close range applications. One point, which Asai Sensei stressed, was that "The breathing in the Nihon Karate Kyokai (J.K.A) Hangetsu must not be audible like that of the Naha-te Sanchin, it must be deep and undetectable." On at least two occasions I saw Asai Sensei fail dan examinees as they used Goju-ryu styled 'ibuki' breathing. One of these times he said to the examinee in question "You... You are Darth Vadar". Needless to say, many people in attendance had trouble not laughing.

Jitte (Ten Hands): The name Jitte is often said to have come from the legend, that if done correctly, this kata has the strength of ten men. Asai Sensei said "the real meaning of Jitte is that there are ten practical fighting applications within this kata. But all of these use the body heavily but 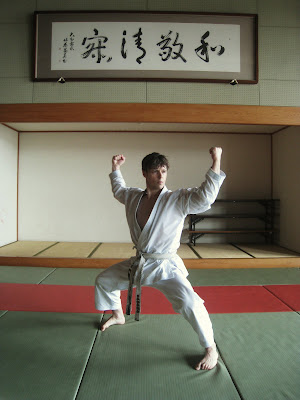 with the limbs light". Technically, of particular importance is the use of the hips to generate power with the torso as a single unit. Jitte is characterized by it boldness and is best suited 'application-wise' for a person who has a solid physique. The karateka who comes to mind, with a wonderful Jitte, is Imura Takenori Sensei of the Japan Karate Association.
_______

Gankaku (Crane on a rock): The original name of this kata was Chinto, apparently the name of master who created this formal exercise. Allegedly Funakoshi Sensei selected this name, as the sequences of standing balanced on one leg 'resemble a crane on a rock'. As Masatoshi Nakayama Sensei explained, the nucleus of this kata is the simultaneous use of uraken yokomawashi uchi and yoko keage, which is very useful for discovering "mixed use of snapping and thrusting techniques". Asai Tetsuhiko Sensei was infuriated by the changing of yoko keage to yoko kekomi (amongst many sports karate competitors). His belief was that the yoko keage in Gankaku was a refined/improved side kick from the original (which was a mae geri to the side, still found in many styles today). He explained that "the yoko keage means you kick the opponents testicals, who is next you without having to turn your body at all. The upward trajectory of yoko keage, and the distancing with this kick, means that uraken uchi can easily be used offensively or defensively."

Like all other advanced kata, Hangetsu, Jitte and Gankaku each require a life time to master. But clearly this life time of practice means more than an empty shell of precise movements and athleticism. As Asai Sensei stressed "Kata is for actual self-defense and must be studied for this, then drilled in kumite". This was the 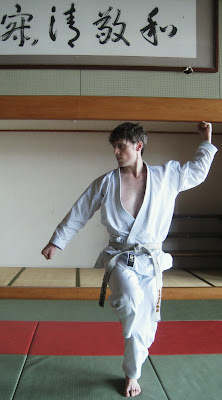 bujutsu (martial art) karate, which he dedicated his life to passing on. Today when we practiced these kata, I thought about the depth of these words, and remembered his renditions of each of them, move-for-move, and his no-nonsense bunkai/oyo-jutsu. I will keep all of these things in my mind and strive to perhaps one day get somewhere close. Regardless of whether I can do this, or not, it is a target which is inspirational. - OSU!