The interview below was conducted by Rene Assano of Brazil who recently contacted me, to see it published online in Portuguese, please follow this link: http://www.karateca.net/forum/entrevistas/entrevista-andre-bertel/ 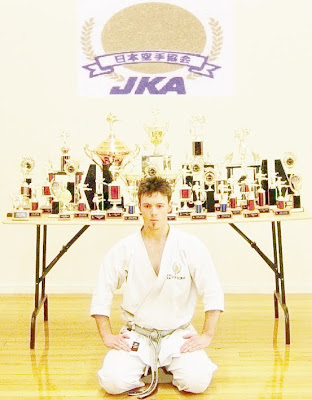 Q1. In your opinion, what is Karate-do? What we should look for in this martial art? (ANDRE BERTEL) Karate in the past was purely a martial art which physically aimed to achieve ichigeki-hissatsu (to kill with a single blow). Modern Japanese karate-do has incorporated the holistic development of the body, mind and spirit, and also the aspect of competition karate. Old and modern karate are both fine, but physically we must still aim to achieve ichigeki-hissatsu with all of our techniques, otherwise traditional karate, real karate, is lost.

Q2. How did you choose the Shotokan style? (ANDRE BERTEL) I didn’t choose Shotokan-ryu, actually my mother forced me to start at five years of age. Initially I hated karate but after finally passing my shodan as a junior in the mid-1980’s I decided to continue on my own accord. As I aged I realized how lucky I was studying JKA style Shotokan and soon began planning how I could get to Japan, even though I came from a family with very little money.

Q3. What are your feelings about the karate-do that is taught around the globe? Do you believe that the true martial art spirit of karate-do was lost in the past? What could be done to change this matter? (ANDRE BERTEL) Essentially karate is dead due to the overemphasis on competition, and karate politicians with insufficient skill, who have transmogrified it into a sub-martial art. Funnily enough the truth is that sports karateka are often stronger than those who claim to be traditional… this is because nowadays the majority of people labelling themselves traditional are practicing a lame version of sports karate. Traditional karateka as I’ve said before spends 100% of their training time trying to achieve ichigeki-hissatsu, this is what is needed to change and revive true karate. Anything less is sports karate regardless of its label.

Q4. What do you think about all the efforts about bringing karate tournaments to the olympic games? How do you see the transformation of karate into a sport?
(ANDRE BERTEL) Funakoshi Gichin Sensei was against any form of competition, nevertheless the JKA developed a sound set of rules which promoted traditional karate technique in kumite and kata. These rules facilitate the development of traditional karate technique in kata and ippon-waza, with control, in kumite. As far as entering into the Olympics is concerned, unless the rules adopted were JKA ippon shobu kumite, I adamantly hope it never gets in. In regards to kata, medal winners in present day competition are usually sickening due to their theatrics and techniques lacking any real impact power. Compare these “performances” with the likes of Osaka Yoshiharu Sensei’s Sochin or Yahara Mikio Sensei’s Unsu. Huge impact with every technique is their focus – traditional karate! Their kata is spectacular because it is pure martial arts not merely trying to look impressive.

Q5. What were your steps into being an Asai's disciple? Who are the other karate-do masters that have inspired you? (ANDRE BERTEL) I didn’t meet and train with Asai Tetsuhiko Sensei until 1993. He took an interest in my karate and after that he invested a lot of effort into my development, something that I didn’t ask for, so I was very privileged to become his personal student. Insofar as other senior Japanese karate masters are concerned, probably all of the JKA instructors have inspired me in some way or another.

Q6. You are known as the person who really absorbed the fantastic style from Asai. There are some posts on your blog with a quite aggressive position about people in JKS, which was the organization created by Asai himself. What are the main reasons for those conflicts? (ANDRE BERTEL) The answer to that question is on my website. So rather than rewrite it please follow this link: http://andrebertel.blogspot.com/2010/10/jks-japans-double-standard-karate.html

Q7. Asai had a very fluid form in his movements, and through his demonstrations, we could see an efficient usage of the joints during Muchiken techniques. How to ally the "soft" of Muchiken with the"hard" of kime? (ANDRE BERTEL) You don’t just keep soft, in Nihongo `kime’ comes from `kimeru’ or ‘decision’. Kime is not about powerfully tensing for a brief moment, but rather where you decide to stop your technique. Other Shotokan masters have different views, but this is what Asai Sensei taught me, and this is what I follow. The fact is, this is more powerful, smooth, fast and easier on the body.

Q8. Could you write about the origin and main concepts about the Hachimon kata? (ANDRE BERTEL) I originally learned Hachimon from Asai Sensei’s in the 1990’s. Its name literally translates as `Eight Gates’ in reference to happo (the eight directions) covered on the embusen. It is the first of three kata in a series; the other two are Senka and Rakuyo. I’m not sure of Hachimon’s origin, however Asai Sensei did say it is a koten-gata (ancient/classical kata). The main concepts are typical of Asai-ha Shotokan-ryu karatedo, namely softness, snap, and natural movement. Hachimon has particular emphasis on postural alignment in one’s fundamental techniques, and both rotation, and reverse rotation. A particular point which Sensei really stressed in all three of the kata in that series was ankle control when turning, so for me personally, this is the major concept.

Q9. What is your opinion about using protection equipment (bogu)instead of the sundome? (ANDRE BERTEL) Let me combine two of my answers above, as this must happen because kihon, kata and kumite form an inseparable trinity. They must perfectly harmonize together, and if most people are honest, they don’t. OK, back to your question, firstly what makes karate traditional is the forging of all techniques to kill in kumite, whether executing kihon or kata. And the paramount issue, when seeking to master this ability, is to near-perfectly control one’s body. Now, secondly, as I have mentioned, kime is deciding where one’s techniques go, how deep, the weapon of the body and the target. Body armour replacing sun-dome would lose this control, whereas the use of sun-dome promotes it. In saying that, sun-dome is not regular practice; it is only applied in non-life threatening competition in the dojo or in a competitive environment. Still all of the power must be there, but arrested not to kill or seriously maim one’s opponent. Use the heavy bag and makiwara for full-contact training and there is nothing wrong with body armour in practice to go all out, but the sun-dome rule should not be replaced in kumite matches.

Q10. Some karate-do styles have a huge focus on creating resistance on receiving attacks, creating tolerance to pain, which is not often, see non Shotokan techniques. Do you think that those training methods are needed? How to ally them to the training sessions? (ANDRE BERTEL) Working in private security for many years I had more than a few street fights, and this taught me a lot about fear, going into shock, and absorbing blows, especially heavy hits to my face and head. In saying that I don’t believe excessive conditioning is necessary, especially for those training merely for civilian self-defence. Nevertheless able to take heavy hits to the abdomen is critical, but again I don’t recommend intentionally practicing absorbing blows to the head. If one is in a serious dojo, they will get smacked hard in the face from time to time, and that’s more than enough. If the instructor is decent they’ll never call yame immediately if a person gets hurt, this is so that students get into the habit of maintaining their defence regardless of their condition. If someone drops their defence before yame is called, when hurt, they have not been trained properly. The only obvious exception is a complete knockout, but this is also indicative of improper training, which brings us full-circle back to sun-dome.

Q11. What do you think about Brazil? Do you have any plans on visiting us? Kind Regards, Rene Assano. (ANDRE BERTEL) Thanks Rene. I enjoy teaching Asai-ha Shotokan-ryu karatedo everywhere, but I have no plans to visit Brazil at present. This year so far I’m teaching karate seminars here in New Zealand, Australia, Japan, Malaysia and USA. The big problem is my schedule; otherwise I’d go everywhere to properly spread Asai Sensei’s karate. Hopefully I will have a chance to teach over there in the future. Osu, André Bertel.